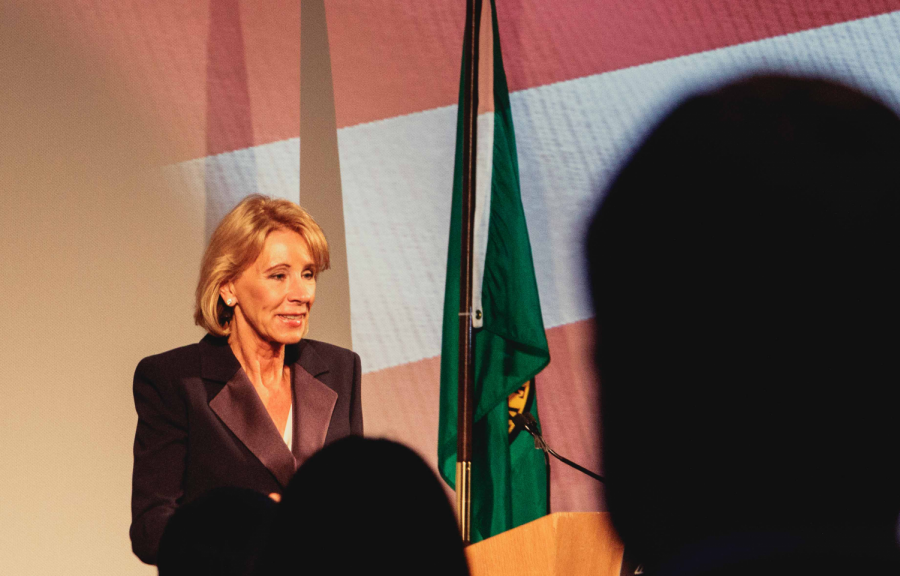 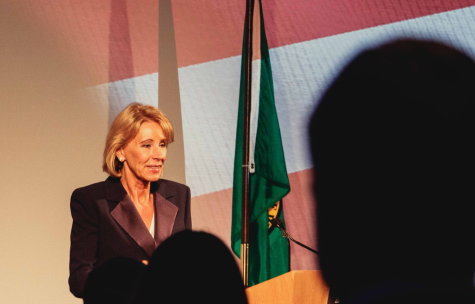 Just across Bellevue Square, on the block the Hyatt Regency Bellevue sits on, a crowd of about a thousand protesters gathered with signs, songs and an axe to grind with the policies of U.S Secretary of Education Betsy DeVos. On Friday, October 13, DeVos made her way to Bellevue to speak at the Washington Policy Center’s Annual Dinner amidst an air of controversy and displeasure.

Appointed in February, DeVos’ confirmation was so contentious Vice President Mike Pence was called in to make the tie breaking vote of approval. That was the first time a tie-breaker vote was needed to approve a cabinet member.

It’s this policy that drove hundreds of people to the streets, chanting, “Betsy DeVos has got to go.”

Jeff Snyder, a teacher from the Olympia School District, had set up a projector with several slides regarding DeVos and school choices equivalent to racism, among others.

“I’ve been doing this 33 years, and charter schools and vouchers will steal money from public education,” Snyder said. “What’ll happen is people will take their money and go separate themselves from the rest of the population, and suddenly the schools will be in trouble with a lack of funds, and the wealthy will go take their money and hang out with the wealthy, quite frankly.”

The idea of charter schools “stealing” money from public schools is a point of contention. When students leave a public, mainstream school, whether it’s to go to a charter school or because they move out of a district, money follows them and goes to the district/institution they attend. This money helps fund school programs and other district needs.

In summary, when a student leaves a public school for a charter school, educational money goes with them, and it’s difficult for districts to adjust to not having the money they were expecting to have.

School choice lobbyists such as DeVos argue that competition for funding increases competition and innovation among schools to attract more students, but many protesters disagreed.

Gerrit Kischner, a principal with the Seattle School District, said that argument is “patently false.” He explained how it was proven wrong by a school choice movement in Seattle during the 1990’s.
“We actually had schools competing with each other in Seattle, for example, where…every principal had to go out and recruit,” said Kischner. “It was a full choice system and actually what you ended up with were greater pockets of bad schools, and a few pockets of good schools, and it was not a sustainable model.”

While many protesters had issues with DeVos’ policies, many also had problems with DeVos’ qualifications, or lack thereof.

A representative from the Party of Socialism and Liberation, who went by Ryan, spoke regarding how his entire schooling was in the public education system. “I couldn’t [begin to] tell you how many people were lower income; how many people in my area were affected by deep impoverishment.”

“[DeVos has] never worked anywhere in public education. She has no conception of what it’s like for people, for the vast majority of people in this country who are actually struggling, and just to get their kids in there and get them into school,” Ryan said. “It’s one of the few things this country can actually offer people concretely.”

This American Life, in an episode titled Vouching Towards Bethlehem, reported that Betsy DeVos had actually volunteered at Burton Elementary, a school in Grand Rapids, Michigan, where DeVos is from. DeVos spent an hour per week tutoring a young latina girl, whom she eventually moved to a private school. DeVos had also been a major force in education politics in Michigan, lobbying for school choice since the 1990’s.

According to a report published on March 20th by the nonpartisan Saint Leo University Polling Institution, Betsy DeVos had a combined approval rating of 34.5 percent, making her the least approved-of Trump cabinet appointee. In September, Politico ran a poll on Trump’s most and least popular Cabinet members, finding DeVos had a 40 percent disapproval rating, and an approval rating of just 28 percent.

Another poll, done by The Associated Press and the NORC Center for Public Affairs Research, found 47 percent of those surveyed supported opening more public charters, despite 58 percent of respondents saying “they know little or nothing at all about charter schools.” The same poll found 66 percent reported unfamiliarity with private school voucher programs.

Then why, with a plethora of opposition, did the Washington Policy Center invite DeVos to speak?

For starters, the Washington Policy Center (WPC) is self-described as an “independent, nonprofit, think tank that promotes sound public policy based on free-market solutions.” In both eastern and western Washington, they host the Washington Policy Center Annual Dinner (WPCAD), which works to bring inspirational speakers who often line with WPC values. An additional Young Professionals Dinner is also held for the college-aged students engaged with the WPC.

Notable speakers and award recipients from the recent past include Gen. James Mattis, Dr. Charles Krauthammer and Nigel Farage. Farage’s appearance at the WPCAD in Spokane also drew controversy due to Farage’s heavy involvement in the campaign for Brexit in the United Kingdom.

The reasoning behind the invitation to DeVos was explained in a blog post by Liv Finne, Director for the Center for Education for the WPC.

Finne explained that the first reason the invitation was extended to DeVos was because of DeVos’ cabinet position. As the U.S. Secretary of Education, DeVos “is one of the top policy leaders in the country,” Finne said. Billions in federal grants are distributed to schools, and several of those dollars benefit Washington state families.

“Naturally, the people most upset about Secretary DeVos’ visit are those who gain most under the current system,” Finne wrote. “Our view is that, because her policy initiatives will have an impact on public school families, we should hear what she has to say.”

The blog post also indicated the WPC’s want to represent an advocate’s opinion regarding school choice, with DeVos being one of the most outspoken and a leading proponent of school choice.

“We at Washington Policy Center may not agree with everything Secretary DeVos has to say, but we will vigorously defend her right to say it. And we will equally defend the right of civically-engaged people in our region to hear her,” Finne said.

So while the protesters shouted outside, DeVos spoke to about 1,200 attendees regarding the benefits of school choice.

“Education is an investment in individual students. And that’s why funding and focus should follow the student, not the other way around,” DeVos said.

During her speech, DeVos compared public education to restaurants with a story about how near the U.S. Department of Education, food choices were limited, so food trucks began to line the streets to service their customers.

“Now, if you visit one of those food trucks instead of a restaurant, do you hate restaurants? Or are you trying to put grocery stores out of business? No,” DeVos said. “You are simply making the best choice for you, based on your individual need at the time.”

DeVos had been scheduled to speak in the Young Professionals room after speaking in the main ballroom, but was unable to due to scheduling conflicts. To fill the time, Representative Maddie Stambaugh spoke on engaging young adults in their world and politics.

“Age is not an indicator of what we can and can’t accomplish,” Stambaugh said.

By the time the event was over, the sky had darkened and protesters had dissipated except for a single individual with a sign saying, “Dump Trump”, and Jeff Snyder and his projection crew, among the masses of Bellevue bicycle police officers supervising cleanup efforts.