Volleyball and justice for all 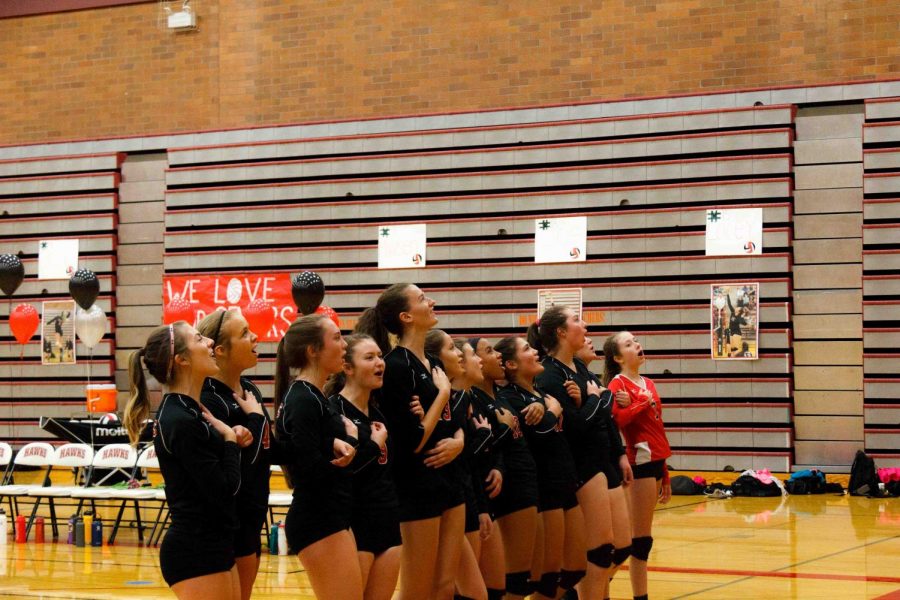 The varsity volleyball team concurrently shout the last line of the Pledge of Allegiance before their home game against the Shorecrest Scots on Senior Night Oct. 10

“With liberty and justice for all!”

At the beginning of every game, the girls volleyball team respectfully stands for the Pledge of Allegiance and shouts the final line in unison. This is how it’s done now and this is how it has been done for generations.

Though its origins are unknown, the team has re-established the meaning of the tradition over time and continues to carry on the spirit and pride it holds.

Varsity volleyball coach Rene Noeun has been familiar with the tradition of shouting the final line of the pledge before a match since 2003 when she entered MTHS as a freshman. She joined the volleyball team in her sophomore year and graduated in 2007. She recently returned to lead the team as coach.

Noeun speculates the mysterious tradition has been around since at least the 1990s — maybe the 1980s. Though Noeun is unsure of whether other sports teams had the same tradition when she was a student, she does not believe they did, out of respect for the pep band.

Although she doesn’t know the original significance of the custom, Noeun remembers the significance it held for her to take part when she was on the squad.

“It kind of meant a lot to me playing here, linking arms with my teammates and being proud of our chance to play a sport,” she said. “So yelling that line with my teammates, pretty much my fellow sisters at the time, it’s just something we looked forward to. It was pride; it was commitment; it was respect.”

Noeun personally kept the tradition alive because she looked up to former MTHS varsity volleyball coach Susie Miller. Miller attended MTHS from 1977-80 and coached volleyball from 1987 to 2004. She was later inducted into the school’s Hall of Fame.

Noeun’s older sister Rattana attended MTHS during Miller’s tenure as a coach and by the time Noeun joined the volleyball team, she had friends who respected Miller and her impact on the team as a tough coach. In addition, Miller proudly carried on the pledge tradition as coach.

“When you see programs succeed, you know that there’s gotta be a good leader behind it and so with that, I respected what [Miller] did and if that’s a tradition she kept for Terrace I definitely want to keep that alive,” Noeun said.

With each generation of volleyball players joining the team, Noeun hasn’t felt the need to formally introduce them to this aged, yet prized tradition. As with most other traditions, freshmen catch on to the habit without question once they sense the dignity it possesses.

“For the most part, the freshmen in general will see it at our home games. I haven’t put a freshman on varsity so they do get to see these traditions as they are,” Noeun said. “Hopefully it’s something that excites them to wanna work hard to be on varsity. We don’t do that for JV and C-level games.”

Noeun never thought the tradition was disrespectful but rather a way to take a national symbol and bring it back to a smaller community and demonstrate pride in a different way.

“It’s showing gratitude to something that is honoring our country. We may not wear the American flag playing for the national team but we are representing Mountlake Terrace and so we want to do that with pride,” she said. “It could be an interpretation as to how you want to perceive us yelling a line but for us it just meant that. It’s our biggest effort to represent the school.”

In regards to delivering the Pledge of Allegiance in an unconventional manner, Noeun said the volleyball team has the right to do so just as people have the right to participate in the pledge as they see fit.

“We don’t mean it in disrespect,” Noeun said. “Know that we do it for our tradition.”

Noeun views the tradition as a unifying moment of pride for the girls that empowers them for their upcoming game.

“I just keep it because it’s never changed. As much as I am for change in other aspects of the world and life, this is one I probably wouldn’t want to change when it comes to school tradition,” she said.

Noeun feels the volleyball tradition is one that is unique in the context of sports at Terrace. As she has gradually bonded with this tradition, as a volleyball player and now as a coach, she feels “it’s just a volleyball thing” and she’d like to keep it that way.