The Grennan Twins take on Terrace 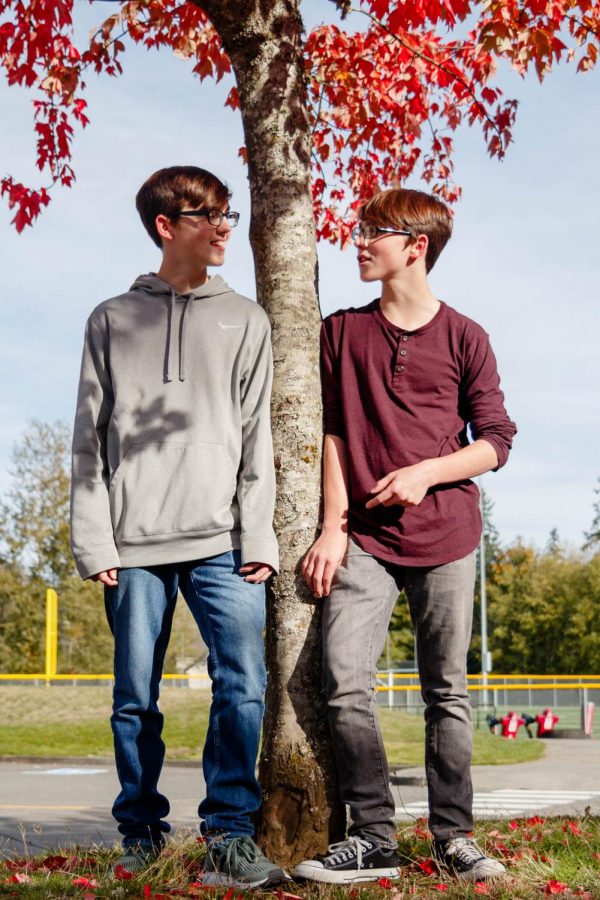 “It’s kind of a weird story — we were born at the exact same time. Our kind of twin is super rare. There are like 50 born a year [with a] 20 percent chance of living,” freshman Jacob Grennan said.

Jacob and his twin brother Andrew Grennan were born simultaneously on Sept. 9, 2002. Starting their lives with the odds stacked against them, they continue to support each other even now, more than 15 years later.

Andrew and Jacob are Monoamniotic-Monochorionic (MoMo) twins. Unlike other twins, they shared the same amniotic sac in utero. MoMo twins are always identical and extremely rare. Whether or not twins are Monoamniotic is determined when the cell splits. There is a small five-day window during which if the cells splits, the twins share the same amniotic sac, according to the website, Pregnancy-info.net. If the cell had split after that time window had closed, Andrew and Jacob would’ve been born conjoined twins. Jacob and Andrew represent one-tenth of one percent of twins.

Despite being physically identical, the Grennan twins are different socially. Jacob, the more extroverted of the two, decided to run for freshman class vice president and now holds the position.

While others might prefer to rise through the ranks and shoot for a higher position, Jacob is  content sitting back while his friend and freshman president Leonardo Diaz presides as head of the class. Diaz and Jacob have  been in their respective roles as president and vice president of their class since middle school.

Between each other, the twins agree Andrew is the more introverted of the pair.

“Speaking in front of crowds or even in front of classes — I get shaky thinking about it,” Andrew said, adding that the thought of standing in front of the freshman class and giving a speech to run for office give him anxiety.

That aside, with a large amount of persuasion, Andrew plans to run for one of the sophomore representative positions in the 2018-19 election.

“Yeah, [Jacob is] forcing me to [run for representative],”  Andrew said regarding his out-of-character plan.

Ever since he was born, Andrew has been hearing impaired, which occasionally makes for a difficult time in class. Simple instruction from teachers can be misheard, forcing him to have to ask for help or interrupt class to ask for clarification.

“Most recently [in] my fourth period, Ms. Widrig’s English class,” he recounted, “She said finish the paragraph, but she said, ‘body paragraph,’ [but] I heard ‘paragraph.’”

Missing a word in the instructions led Andrew to do the assignment incorrectly.

As they discovered in fifth grade, separating is a difficult adjustment for the twins. Both recalled how the situation strained Andrew.

“In fifth grade I was very anxious. I didn’t have my brother in [my class] so I didn’t have someone to look to. So I was confused because [of] my hearing. I’ve gotten more used to it, so high school is not even a problem for me any more,” Andrew said.

That year, not only was he at a disadvantage because of his impaired hearing, but his teacher struggled to understand that he had different needs than the other students.

“My teacher was considerably quote-unquote a ‘better teacher,’ and [Andrew] got the teacher that didn’t really understand his hearing disability,” Jacob said. “I felt bad because I guess I wasn’t really there to be like ‘hey,’” Jacob gestures as if directing the teacher’s attention to his brother, “Hearing. It was difficult for him.”

After that experience, Andrew and Jacob became more capable of being in class without each other. Although it was still a hurdle Andrew had to overcome, he now goes through his day only seeing his brother during passing periods because they have chosen different academic paths.

Andrew prefers computer science and intends on pursuing it in college. Jacob has a vested interest in history, with it being his best subject in school. He hopes to one day have a job involving history, along the lines of historian or a history teacher.

Jacob’s love of history began at a young age. He and his dad would go into his room, lie in bed and watch documentaries, sparking his passion for history.

Jacob decided to not enroll in the full STEM pathway and instead has decided to take four years of American Sign Language (ASL).

“Both my sisters took ASL, and I guess talking behind people’s backs. Not like in a rude way, but as in [jokingly]… If you knew my friend group this would sound completely normal,” Jacob said, explaining his decision.

Being raised together, the twins acquired similar interests and activities.

Almost every day after school, Andrew and Jacob walk with some of their friends to Cedar Way Elementary School. There, the high school students are put to work, helping out with the kindergarteners. They stand at the front of the lines for the buses and sort students out by their stops.

Beginning school can be difficult for kindergarteners and what the twins do helps ease some of that.

In addition, Andrew and Jacob occasionally work in classes with students who need extra help. Both brothers enjoy helping out with the students.

“They wanted to volunteer last year but middle school gets out not with enough time to really have some consistency,” their mother Kerri Grennan, who works at Cedar Way, said.

At the elementary school, Kerri works as a paraeducator and runs the school’s solution room, which is where students are sometimes sent to resolve conflicts among each other. She works with the students and helps them work out their issues, which Andrew found very helpful growing up.

“So I’ll have an issue that I don’t know how to deal with or explain and then she’ll just tell me my issue and it’s just like that’s spot on,” he said.

“They were never alone… and I’m so thankful that they had each other,” said Kerri.

This opinion is shared by both her boys. Andrew and Jacob agree that having a twin made their childhood more enjoyable.

“It’s a lot more fun… When you play with action heroes or something like that, it kind of sounds a little crazy… kids are just talking to themselves, so it’s a little different because you are talking to someone else,” Jacob said.