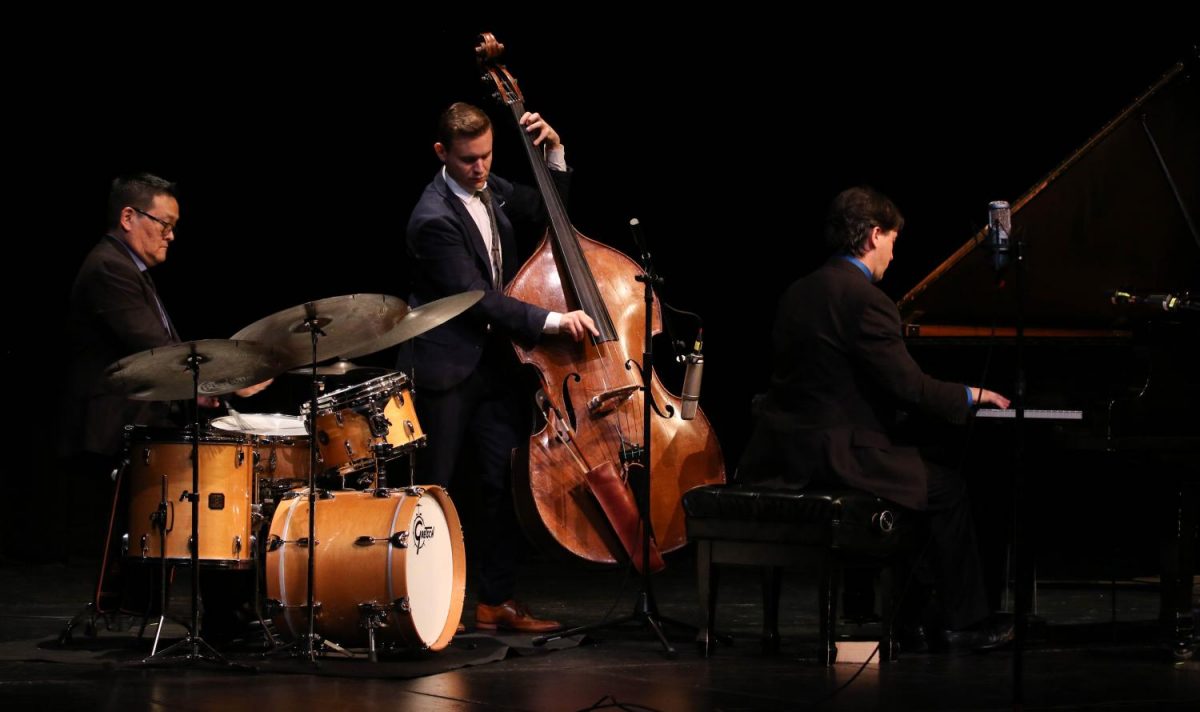 Gallery|10 Photos
Harper Thomas
The Tamir Hendelman Trio takes on the Terrace stage after an hour of playing with Jazz 1 and Jazz 2. The trio played a variety of songs picked from Hendelmen's albums "Destinations" and "Playground."

The jazz program kicked off their first jazz night of the school year featuring the Tamir Hendelman Trio, a well-known jazz rhythm section. After working with the band on Monday, Sept. 25, pianist Tamir Hendelman, bassist Alex Frank and drummer Dean Koba performed with them the following night.

Prior to the concert, the Snohomish Pie Company sponsored a pie giveaway. For anyone who was attending their first MTHS concert, they received a raffle ticket to win one of two free pies.

Jazz Ensemble 2 (Jazz 2) started off with “Inside Out,” a rock tune to excite the audience. Following the piece, band director Darin Faul formally introduced the jazz bands and the Tamir Hendelman Trio, who he had known since before the concert was arranged. Faul said the concert displayed something he hadn’t “seen done before in a jazz context,” which was having two rhythm sections play simultaneously.

“But I would say having a rhythm section guest is more beneficial to everybody,” Faul said. “It really captures the feel and the essence of the song and modeling when students are in close proximity to those players.”

Sharing music, that’s what makes it special. Because it’s one thing to play music by yourself and it’s another thing to share it with the audience.”

Resuming the concert, Jazz 2 put on a performance of “A Nightingale Sang in Berkeley Square.” Hendelman and Koba joined in for the next piece, “Fly Me To The Moon.” To close the set, Frank completed the trio onstage and joined Jazz 2 onstage for “Milestones.”

As Jazz 2 moved out and Jazz Ensemble 1 (Jazz 1) transitioned onto the stage, the pie raffle winners were announced. It was noted that the purpose of the pie giveaway was to increase audience attendance.

Jazz 1 and the Tamir Hendelman Trio rocked the stage next, starting with “Driftin’,” which highlighted a bass soli.

Hendelman reflected on the history behind the next piece, which was a song created shortly after Hendelman’s first daughter, now 10-years-old, was born. While on a trip to the playground with her, Hendelman was hit with musical inspiration and thus named his debut album “Playground.” The trio, in conjunction with Jazz 1, performed a song from it entitled “It Never Entered My Mind.”

The two groups took on “You Stepped Out of a Dream,” one of Hendelman’s favorite songs, which emphasized the rhythm section and put them on full display. They dove into “Playground” next, opening with a bass soli and demonstrating strong chemistry and communication between the pianists.

I hope… they’re really looking forward to not just making music by themselves but making music with each other, making every moment special, no matter what style they end up playing, who they play with, where they go.”

For the last collaboration with Jazz 1, Hendelman hand picked a song inspired by a cartoon strip in a magazine he used to read when moved to California as a kid. Titled after that very comic strip, Jazz 1 and the Tamir Hendelman Trio finished off the set with “Spy Vs Spy.”

Following an intermission, the trio returned with a song that Hendelman first heard in an American movie that he didn’t specify. Part of the song included Koba using brushes on his drums for a rain-like effect.

They changed up the mood with the next piece, which Hendelman described as an “adventure in the Amazon Forest” that leaves the audience “imagining an image of nature.”

The trio performed “Sycamore” next, a song with a softer feel to it that embodied Hendelman’s childhood memories with his father.

“When I was about a teenager, sometimes I’d be coming home from school and I’d see that we had this beautiful row of sycamore trees,” Hendelman said. “And I would take these walks with my father just to talk about life, what’s going on, what’s happening. It was always really soothing just walking down that street with my father, talking about life, watching leaves do this thing.”

Afterward, they performed “Soft Winds” from their “Destinations” album. With a transition of emotions, the Tamir Hendelman Trio performed a medley Hendelman felt was reminiscent of France in the summer.

He expressed his amazement with the Mountlake Terrace area and having the opportunity to work with the “great music students” at Terrace before heading up to Vancouver and Yukon to continue his band’s tour.

Hendelman described the next song as being classical music with jazz that exercised excellent use of harmony and acted as a tribute.

“When you pay tribute to someone in France, you say you’re standing in the tomb of this person,” he said.

The seventh song of the setlist placed the spotlight on Frank for his bass solo. After Hendelman thanked the crowd, the trio closed with a song Hendelman described as not being blues despite being called the blues. Koba stole the show as Hendelman and Frank turned to watch him perform a loud, elaborate solo.

Despite not rehearsing much with the jazz bands, Koba felt they picked up on new tricks quickly. The opportunity to play with Terrace made Koba happy to hear the growth of the jazz bands and creating a fun atmosphere for both him and the audience.

“Sharing music, that’s what makes it special,” Koba said. “Because it’s one thing to play music by yourself and it’s another thing to share it with the audience. Not that we’re trying to be rockstars, just trying to share art and our experience together.

While performing onstage, Frank ran into a technical issue with his bass. He recognized an amp problem and quickly disconnected it to get back on his feet and keep the show going. Frank had praise for Jazz 1 bassist and freshman Andrew Vinther, who was a fast learner and traded bass lines with Frank skillfully.

Like Faul, Hendelman also thought it was unusual to feature a double rhythm section, but he loved the results of the concert and the training the trio did with the jazz ensembles. He emphasized teaching them to leave space in solos so the soloist is featured and also feature the people who are accompanying them.

“The highlight of the night was seeing these kids take a chance and stretch beyond what they usually do,” he said. “You get to spend a couple of days at a school and work with the kids and rehearse in a workshop with them and then perform with them. When some of the things you spoke about the first day stick and you see them trying them out and having fun with them, then you know you’ve made a difference.”

Hendelman enjoyed working with the jazz students, who he described as being focused and open to experimenting with new skills.

“I hope that they take away the joy so that whenever they pick up their instrument, they’re really looking forward to not just making music by themselves but making music with each other, making every moment special, no matter what style they end up playing, who they play with, where they go,” Hendelman said. “Because if they really capture that joy and share it, then the music is just going to get better.”