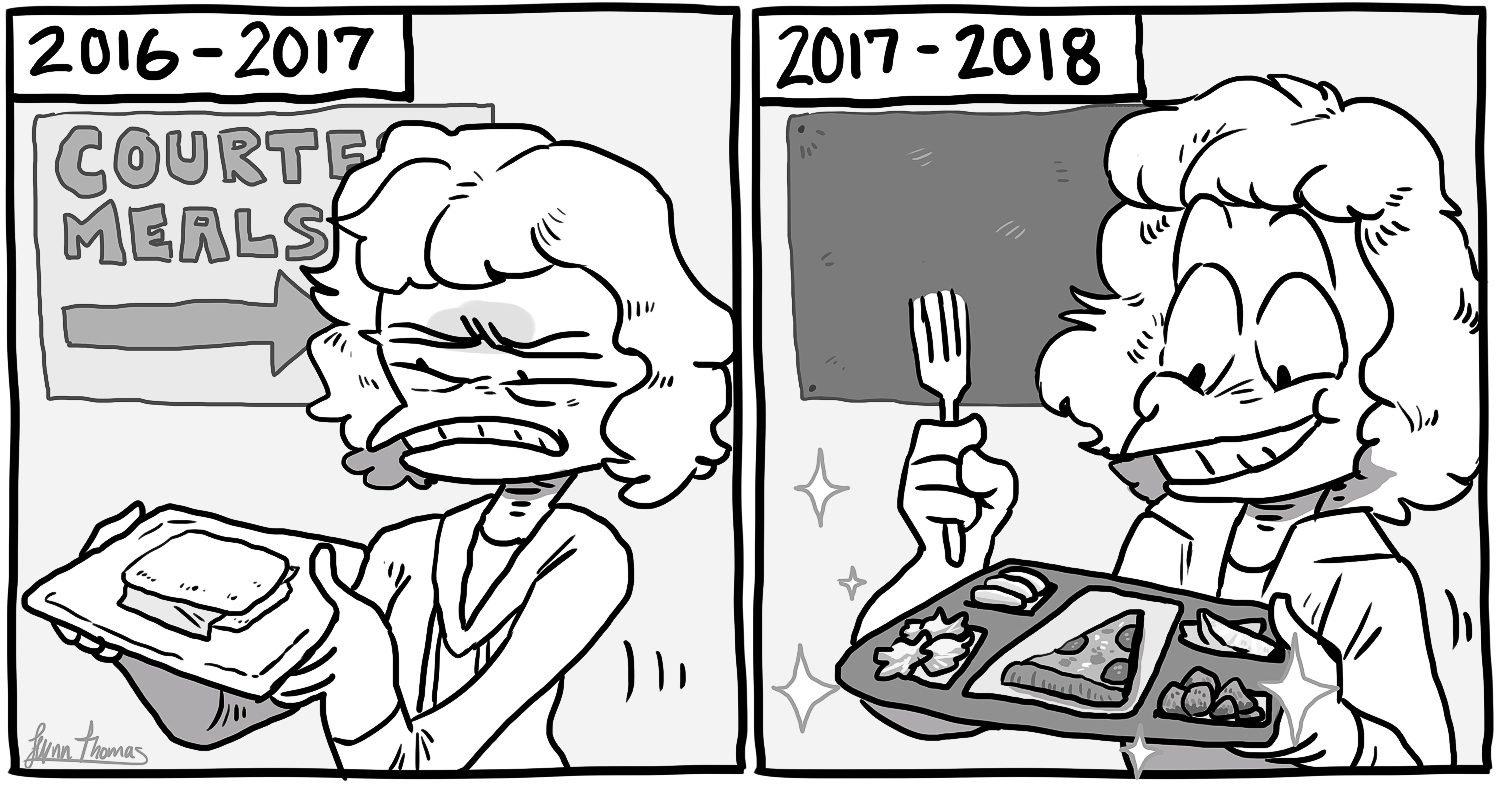 The Edmonds School District (ESD) has elected to stop giving out courtesy meals for the 2017-2018 school year. Instead, a student with a meal account debt can continue purchasing full meals. As of Sept. 6, no student in the ESD will have a negative meal account balance due to debts being covered with donations from the community.

The biggest factor in removing courtesy meals was to combat the stigma around getting one.

A courtesy meal, also called an alternative meal, was given to a student when they attempted to purchase a school meal but did not have the money for it. The ESD began producing them in 2008 to both manage debt and feed more students.

With this change, a student with insufficient money in their meal account will still be able to eat the hot lunches served in the cafeteria. They will not be given a courtesy meal if their meal balance is in the deficit. However, this policy only applies to full meals and will not be effective for purchasing a la carte items, such as chips or cookies, if a student is in debt.

The breakfast courtesy meal consisted of Cheerios with milk while the lunch meal included a cheese sandwich, raisins and juice. Contrary to these, schools have rotating lunch options that change from day to day.

The school meal debt of students in the ESD racked up to $6,936.13 from the 2016-2017 school year, but was erased through donations from the public. 60 graduating seniors of the class of 2017 were prevented from graduating due to having a meal debt, but the donations paid it off, allowing them to graduate on time.

Although courtesy meals were given out for free, the ESD was at a disadvantage because they produced no revenue. The meals were not reimbursed by the government and were accounted as costs to the Food and Nutrition Services Program.

Each breakfast courtesy meal costed the district $0.41 while a lunch costed $0.54. Altogether, the cost of just these alternative meals added up to $4,200 in the 2016-2017 school year. It is still unsure how the removal of courtesy meals will affect the meal debt this school year.

When a student’s meal balance goes into the negatives, their debt will not automatically be paid off by the money earned through donations. It has not yet been specified or determined how the donations received during the 2017-2018 school year will be used to pay off the district meal debt; the Food and Nutrition Services and Business Services will determine how the funds are used on a case-by-case basis.

The ESD meal system has changed many times in the past to accommodate both students and the district itself.

Leading up to 2005, the ESD allowed students to go into debt up to $15 before refusing them a meal entirely. However, from 2005-2008, in an effort to feed all students, the ESD decided to let every student eat the same meal, regardless of their debt.

By 2008, the ESD had reached a $200,000 meal debt they could not support financially. For the 2008-2010 school years, they reinstated the $15 debt policy but chose to give courtesy meals instead of letting students go hungry.

The ESD took further action in the 2010-2011 school year to reduce the $140,000 meal debt they accumulated the prior school year, believing they should fund education rather than focus their efforts into paying off the debt. Once a student’s meal balance reached $0, they would then be given a courtesy meal.

The district will continue to monitor lunch balances and send out personal emails or phone calls to students who develop meal debts this school year.

“The overwhelming message [school] districts across the country are getting from parents and from the USDA (U.S. Department of Agriculture) who regulates us is that there is a stigma attached to getting a courtesy meal,” Lloyd said.

She believes the stigma at hand caused students to be embarrassed when they were offered a courtesy meal because it implied that the student lacked the money to purchase it.

Lloyd said some students who refused the courtesy meals found it “emotionally damaging” because of the stigma or they didn’t like the contents. They often had trouble focusing in school later in the day due to hunger and lack of nutrition, Lloyd said.

“It got to the point that the stigma around courtesy meals was interfering with some students. Either they didn’t take the courtesy meal and were starving in the afternoon, and you can’t learn at your best if you’re hungry or they took the meal and felt embarrassed somehow,” she said.

“You can’t learn at your best if you’re hungry or felt embarrassed somehow,” she said.

Lloyd noticed the stigma of alternative meals become a popular conversation due to social media, spreading the word in the spring and attracting donors to pay off the meal debt.

“Hopefully the community will continue to pay that debt,” Lloyd said. She plans to encourage donations throughout the year.

Lloyd hopes the decision to eliminate courtesy meals will allow for for students to buy the meals they want and help increase academic performance.

Along with the right tools and environment, Lloyd views nutrition as a major key to success to fuel students to work their hardest.

“All of us in what we call support services are keenly interested in wanting every student to succeed. And you can only succeed when you’re well nourished, when there’s clean facilities where the equipment in the building works, where you have the technology to do the work you need to do as a student,” Lloyd said.

She hopes giving students proper meals will alleviate stress and allow them to focus on their futures.

“Not every child will be an astronaut. We need plumbers, car repairmen, we need doctors, we need teachers, we need everybody. We want every student to be as successful as they want to be,” Lloyd said. “My belief in removing the stigma from alternate meals will help that. The world needs everybody to be their best.”

Lloyd hopes the district tackles the stigma around eligibility for meal benefits next, also known as free and reduced meals.

The link to donate toward the school lunch debt can be found here. It should be specified as a donation and can be donated to a specific school or student account.