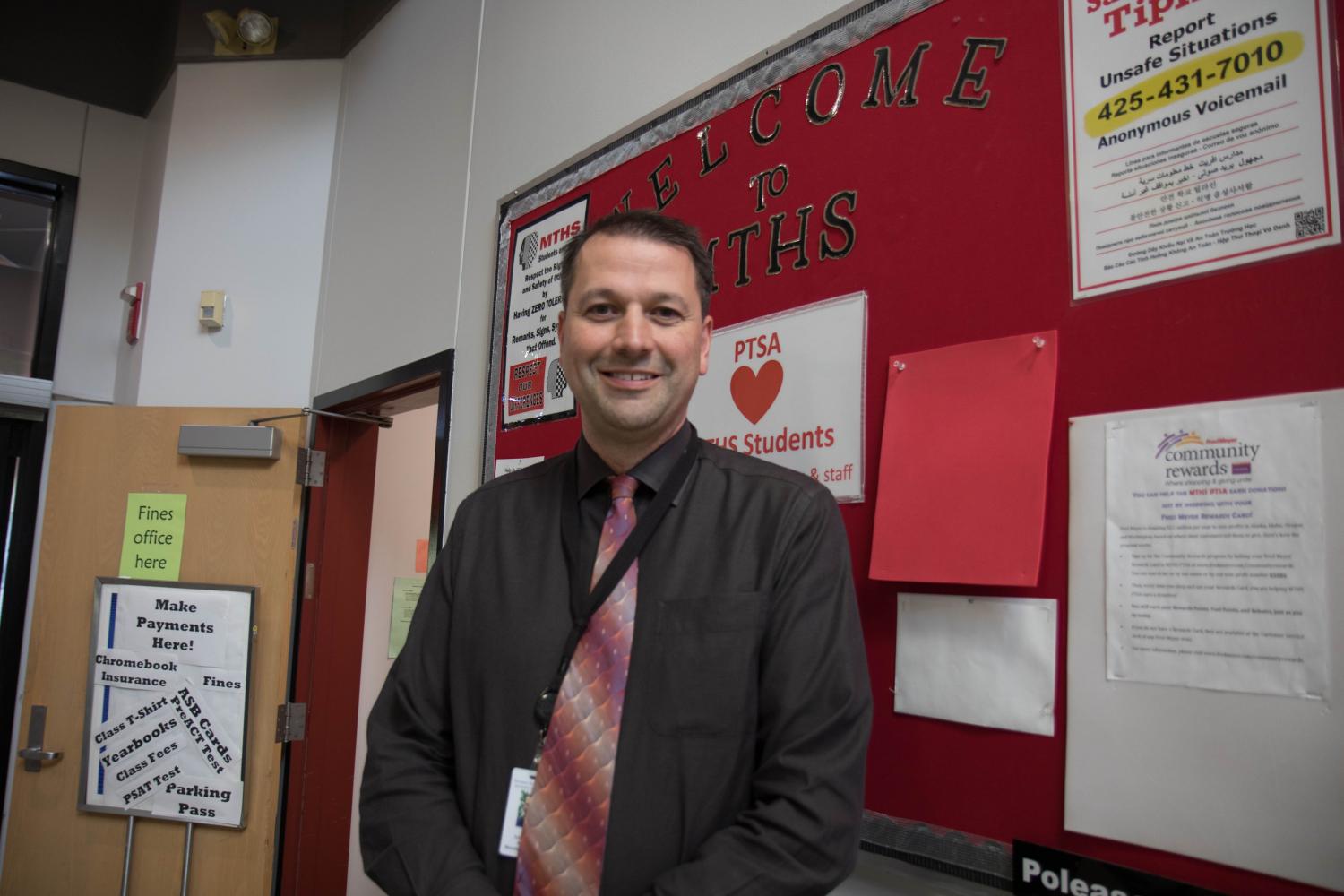 Greg Schellenberg’s 30-seconds or so introduction is straightforward enough — a reprise of his resume. Schellenberg was hired over the summer as the interim principal for Mountlake Terrace, a position that means Schellenberg is taking on principal duties for the school year while the district looks for other candidates to permanently fill the position after Greg Schwab’s departure to fill a district superintendent position after a 13 year run.

Schellenberg’s first impression of the school was “It was empty. My very first day here was July 24, and there was really, honestly, nobody here.” He met and toured the vacant school with Schwab.

“It was on that tour that [Schwab’s] pointing at a room and saying all the great things that happen in the room… so that was an impressive introduction to the school,” Schellenberg said.

While Schellenberg lives in the area now after growing up in Oregon, much of his experience as principal comes from international schools.

“It started [in] 2000, 2001, my wife and I before kids; we taught at some American schools, and one of them was in China, and another was in Saudi Arabia,” Schellenberg said.

One of Schellenberg’s favorite memories of teaching abroad comes from Saudi Arabia, his first principal job. He was living in a remote part of the desert and had to return to school. On his way, he saw people from all backgrounds — “there were kids, there were gardeners, there were Muslims, there were Christians” — playing a game of soccer on a field of dust.

“They were just… playing this fun, little game of soccer that was competitive, but there were high-fives and some hugs,” Schellenberg said. “And it really struck me, you know, ‘Wow, governments could learn from this.’ The dust with the sunset and the competition and the camaraderie was — it really stood out to me.”

Schellenberg also noted the diversity of a Shanghai high school he was principal of with students of almost 80 different nationalities.

“There was one boy from Madagascar, and one girl from Belgium, but they’re coming in almost like [the] United Nations representing their country,” Schellenberg said.

But being in education abroad comes with its own challenges. “You can do anything. There’s not state mandates. There’s not external assessments that you have to pass, and so you get to create your own,” Schellenberg said. “And while that is fun, and that sounds fantastic, it’s also a lot of work and a lot of hard decisions [to make].”

With working abroad also comes experience with different cultures. “Things don’t work in China or in Thailand as they do here, and they shouldn’t, but it’s different, and it’s not right or wrong,” Schellenberg said.

But with his international excursions comes lessons of empathy and compassion; Schellenberg said he felt that working in another country makes it easier for him to put himself in the shoes of immigrants coming to the United States.

“We enjoyed our experience, but we returned back [to Washington state] to have our own kids and to start a family.”

His return was short-lived; soon after, his family made the move overseas where his sons received their education through international schools from kindergarten to fifth grade. “Oftentimes, they were the only native English speakers in the classroom, and when we were living in Thailand, they were participating in Buddhist ceremonies that were part of the school,” Schellenberg said.

For now, Schellenberg and his family are back in Washington. Having just celebrated his 18 year anniversary with his wife and his twin sons completing a year of middle school in Lake Washington, they’ve started to settle. “[My sons are] just loving life here,” Schellenberg said.

Schellenberg had worked in middle schools for thirteen years before moving to the high school scene in 2003.

As for his own high school experience, Schellenberg filled his time with extracurriculars, doing band for a year, a few AP classes, student government and basketball.

“I was 6’ 8” and built like a pencil,” Schellenberg said. “I was really active in my school and really enjoyed the high school experience.”

With a reputation of having strong programs such as music and STEM, Schellenberg hopes to help those groups continue to progress and improve, “but also to be a taker, and to learn and observe and marvel in what’s really good about this school.”