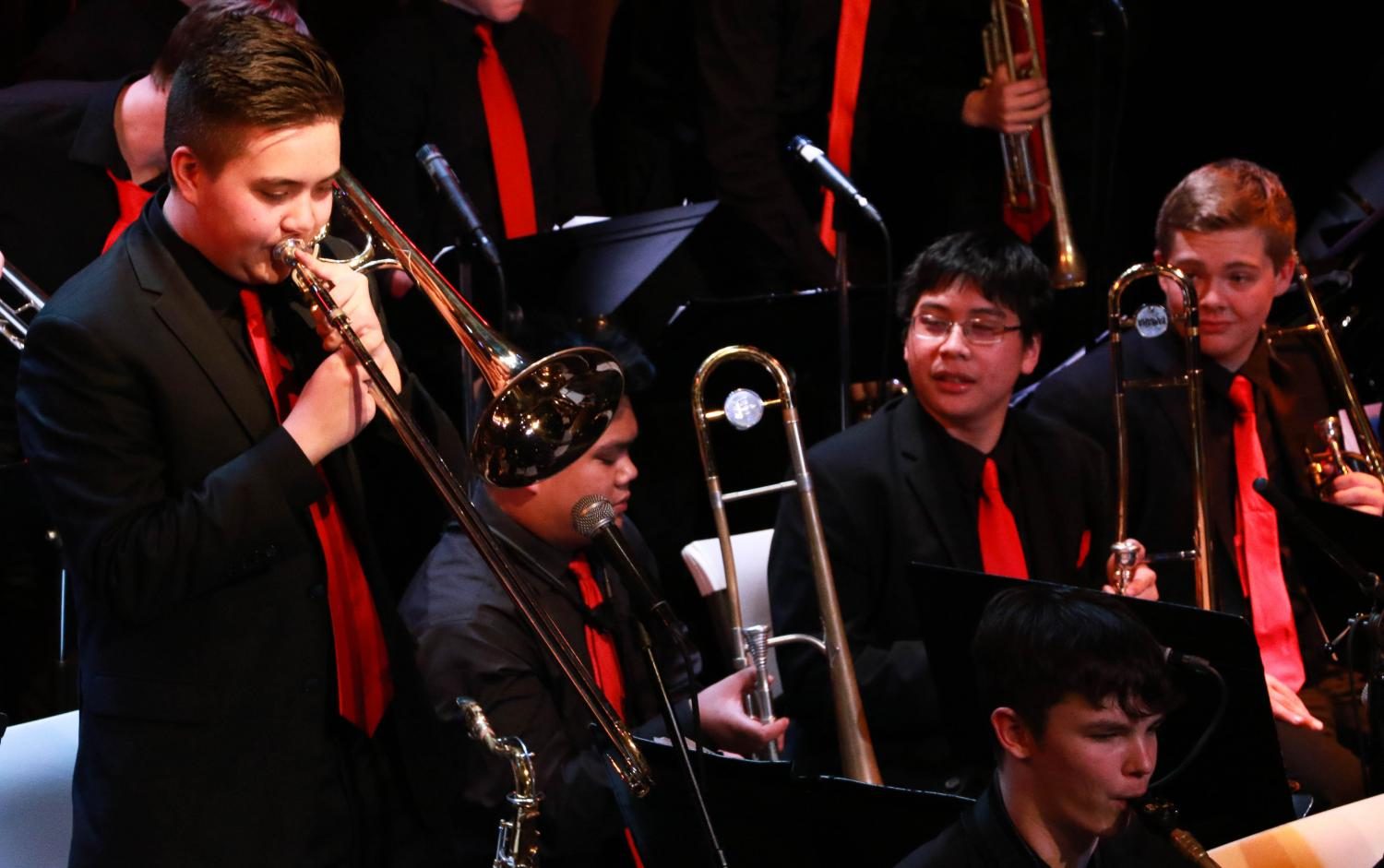 The MTHS Jazz Ensembles broke out their instruments one last time this school year at their end of the year concert, which took place at Dimitriou’s Jazz Alley in Downtown Seattle on Wednesday, May 31.

Around 6:30 p.m., seats and tables began to fill and the show had begun. Jazz Ensemble 2 (Jazz 2) began their set with “Moten Swing,” originally by Count Basie. The sound and feel of the song fits the “Swing” portion of its title and included solos from freshman Steven Yang on piano and sophomore Jackson Marrott on tenor saxophone.

Their set continued with ballad and freshman Owen Moreland’s alto saxophone feature, “Samantha.” Band director Darin Faul mentioned how the song’s intent is to convey emotion through its story.

Moreland went on to explain that the story was about two star-crossed lovers who wanted to be together but they were unable to, so the song was meant to convey the sadness behind that.

Jazz 2 continued their set with three songs of the same style titled, “Peanut Vendor,” “Now’s The Time,” and “So Easy.” Many solos were taken throughout these last tunes, though freshman Ernesto Torres took one in each of the three. Faul praised him for his courage and for his improvement throughout the year. Their final song was “Skydive” and included another solo from Yang on piano.

Jazz 2 exited the stage while the MTHS Alumni Band made their way on. This year’s alumni group included many memorable faces from different years such as Jacob Krieger (Class of 2015), Jack Walters (Class of 2011), Jory Tindall (Class of 2008), Joe Walrath (Class of 2015) and many more.

They opened their set with the tune, “Who Me?”, including solos from Henry Sparks on trombone (Class of 2014) and Krieger on tenor saxophone.

Alumni Arthur Segami (Class of 2009) and Tindall took on the subtle bossa nova alto saxophone duet, “Evelyn, Queen of the Racquet Club,” originally by Bob Florence, also including a solo from pianist Kevin Proudfoot (Class of 2005).

Segami took the lead alto part, while Krieger and Walters  both took solos on tenor sax and clarinet, respectively.

The final group for the night was Jazz 1. This was the last high school jazz concert for nine of the band members, who are seniors.

Jazz 1 began with the chart “Song for Bilbow,” with solos from on guitar and freshman Caden Hargrave on alto saxophone. Continuing on, they played a song from their Essentially Ellington set list, “Stay on It,” featuring solos from Hargrave and senior Andrew Sumabat on trombone and trumpet.

An original composition by senior Damon Dahl was also played. This song, titled “Flames in the Dark/Mysterious,” had more of a straight rather than swing feel, also featuring senior Max Knibbe on clarinet.

The band continued with the two other songs from their Essentially Ellington set list that they competed with weeks prior to this. The first song from the set was the classic swing “Bojangles,” including solos from Rajah on tenor saxophone, Neri on guitar, Knibbe on clarinet and Sumabat on trombone.

The second was a tune titled “Such Sweet Thunder.” Rajah opened the song with a powerful tenor solo, garnering many cheers from the audience. Seniors Nathan Reeber, Finn O’hea and Sumabat and junior Ethan Pyke also had solos on this song.

Jazz 1 closed the show with an original composition by Jazz 1’s own drummer, sophomore Kieran Faris, titled “Sin Nombre.” The tune had a very upbeat and intense Latin feel, emitting energy into the audience. Solos included Rajah, Sumabat and Neri.

Faul recognized the graduating seniors and thanked them for their hard work throughout the years. After the performance, senior Finn O’hea, a student who transferred from Kamiak High School specifically for jazz, shared some words. O’hea stated he was sad to see everyone go, but “it’s been a good year, it’s all worth it in the end.”