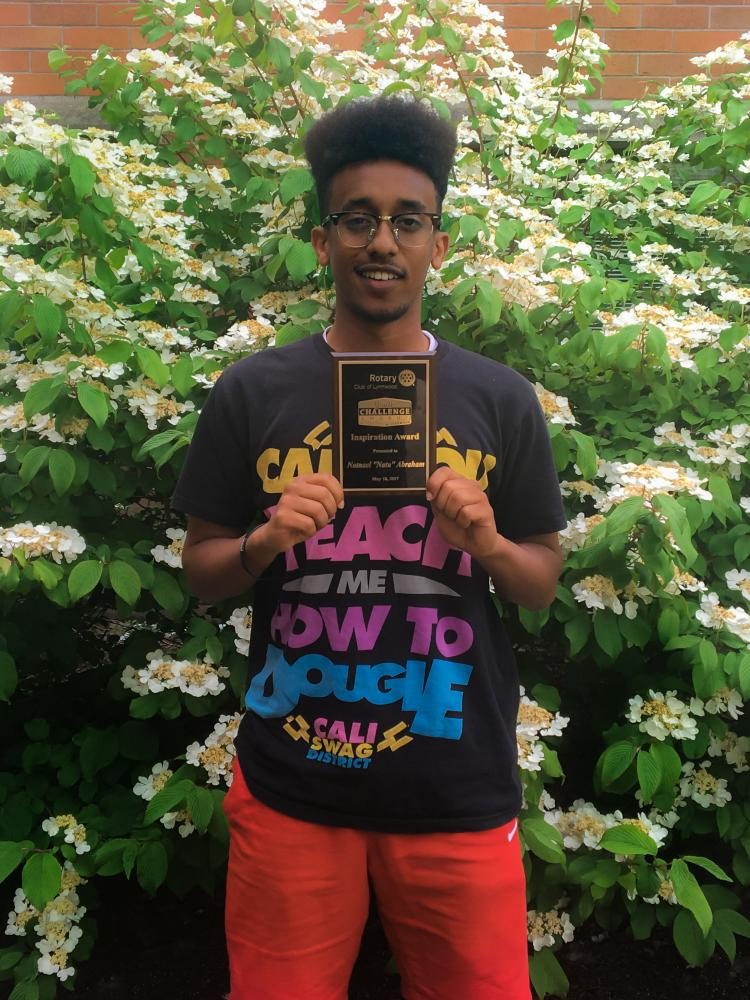 Abraham moved from Eritrea at eight-years-old and needed to adapt to a new culture and society, prompting him to take on a leadership role and establish his own identity. Abraham flaunts his Youth Challenge Award for inspiration.

Senior Natu Abraham was honored with the Inspiration award by the Rotary Club of Lynnwood on Thursday, May 18. Abraham was nominated by paraeducator Debra Davenport as part of their Youth Rotary Awards, which recognizes students who “have an entrepreneurial spirit and are positive leaders,” according to their official website.

Among the award categories are Community Service, Courage, Creativity, Leadership/Inspiration and a group award. Winners are selected based on their commitment to their service and their impact on the community. Abraham also received $200 and a plaque with his award.

“When I got this award, the smile on my mom’s face meant everything for me. Just seeing my parents proud, seeing all the different things I’ve done, getting this award, it was probably the highlight of my senior year to see them smile,” Abraham said. “I just do it for my parents, pretty much. They brought me to America and doing all these different things is how I’m paying them back.”

Abraham’s family moved from Eritrea in order for Abraham to pursue a higher education and strive to be the first member of his family to graduate from high school and college. His end goal is to become a positive representative of Eritrea and a role model for black youth.

“For me, being a role model is mainly for the kids that come from a different country and have to adapt to a new society that America has and how it’s so hard to fit in,” Abraham said.

Immigrating from Eritrea at eight-years-old, Abraham can sympathize with those kids who have “hopeless moments” when they adapt to American culture and learn English.  Abraham hopes to become someone those kids can look up to because he can share his experiences of climbing his way to success and taking on leadership positions while also managing a job for three years of high school.

Growing up, he always wanted to have an older brother to lean on. Because his parents were often busy, Abraham had to become independent and learn to be a leader.

“For me, being a leader is pretty much being someone just standing up and taking a role and leading the ones that don’t have the courage or hope,” he said.

Despite thinking it’s cliché, Abraham is a firm believer in the philosophy that “If I can do it, you can do it.” He tries to inspire others by living alongside the Ghandi quote, “Be the change you want to see in the world.”

In his sophomore year, Abraham started involving himself in many extracurricular activities per former behavior coordinator Michael Boxley’s request. He acts as president of Black Student Union, as well as participating in Teens Against Tobacco Use, LINK Crew, the University of Washington Young Executives of Color and Barbizon Modeling. Additionally, he also juggles a part-time job at 190 Sunset, plays for varsity soccer and volunteers for Food Lifeline.

“I think my junior year I knew doing all these activities would be a good cause for college résumés and for my applications, but I realized it’s about giving back and just enjoying the last year of my high school career,” Abraham said.

Though the majority of his friends don’t participate in clubs, Abraham tries to deviate from them and “live the most” during his senior year. He enjoys keeping himself busy and using his time wisely to prepare himself for the future.

Due to participating in many extracurriculars, Abraham rarely finds himself relaxing at home. He manages his time by tending to his commitments first, then having fun on the weekends.

In this balancing act, Abraham often finds himself being booked with multiple events at once. The most difficult part for him is determining which event is worth more to him and choosing which to sacrifice. However, he feels his packed schedule is preparing him for college and the real world when he needs to make wise decisions.

Abraham wants to continue pushing himself to take on bold opportunities. He plans on attending the University of Washington to study business and communications, then transfer to a California school to study broadcasting and later become a TV personality in Hollywood.

Even with his senior year coming to a close, Abraham will keep working to inspire more youth to excel and succeed in their future. Next week he plans on visiting English Language Learning (ELL) students at MTHS to present his story and experiences with adapting to American society. He will also visit Brier Terrace Middle School as a guest speaker for the ELL students. As he used to be an ELL student himself, Abraham has a soft spot for other kids in the program.

A long term goal of Abraham’s is to pass on his legacy of inspiration in Eritrea.

Abraham aims to show Eritrean youth that immigrating to America is not the only way to pursue success.

“There’s no hope for the kids out there. They see America as a different world and people don’t normally come back. I want to come back and make a difference,” he said. “I don’t want them to see that there’s only one hope [which is] going to America.”

His vision is to start a movement in Eritrea to promote the belief that citizens can make a change in their own society and also inspire others to do the same.

“There’s always hope that you can do within the country,” Abraham said. “I want to start a foundation that there can be hope for the kids in their own country.”

Another life goal of Abraham’s is to change the image of African-Americans that the media portrays. However, he has yet to think of how he will accomplish this goal.

In regards to younger generations of leaders, Abraham hopes they won’t be afraid to try new things. He believes they should network with others, be open to everyone and establish their own identity.

“Be the person you want to be. Don’t be afraid of what others are trying to tell you,” he said.

Abraham sees high school as the prime time for people to take advantage of their opportunities and achieve whatever they want.

“There’s [so many] things to do out there in high school. Being so young, this is probably the [biggest] highlight of your life, just being this age. You have this drive that you want to be anything in the world and you can do it,” Abraham said. “You start with your community, you start with your own school, and you build off from that.”

For the time being, Abraham is satisfied with his hard work up so far. After struggling to make it where he is now, he hopes to show his parents that his efforts have paid off and inspire others to have a similar impact on the community and in their lives.