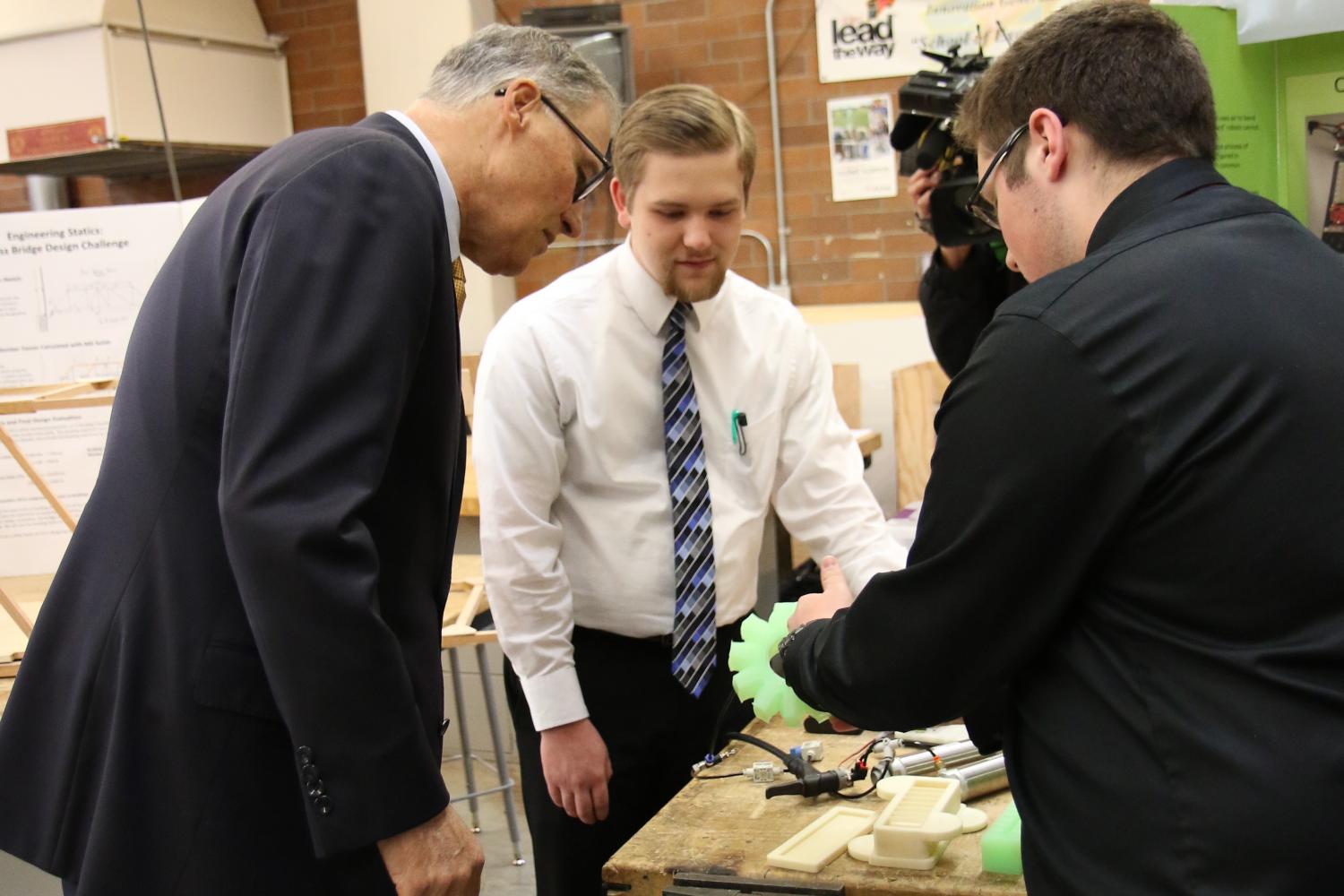 Washington state Governor Jay Inslee visited MTHS Friday, at about 1:45 p.m. He first arrived in the STEM hallway as seniors Elizabeth Jurgensen and Natu Abraham were his tour guides during the visit.

His first presentation introduced the STEM program and the pathways that are included. Engineering teacher James Wilson was first introduced and Jurgensen gave Inslee a short summary regarding STEM at MTHS.

Jurgenson introduced Inslee to seniors Nathan Cockbain and Bukhari Shaki who are both involved in STEM classes. They explained their project with a Wind Tunnel and noted that it received an “excellence” at the Washington State Science and Engineering Fair.

Next sophomore Brenna Mohagen was introduced as a Principal of Engineering student. She explained her project, one about the application of mathematic and scientific principles. This project included design, computer modeling, construction and testing of various different products requiring mathematical consideration. Mohagen demonstrated to Inslee a bridge that was 6 lbs and could hold 1000 lbs.

The final presentation of the STEM tour was the Biotechnology class.  Seniors Aarthi Yogendran, Elizabeth Kisler, Jeremy Ansdell and Max Leidig introduced their project about the Mutations in Worms. Inslee ran out of time to complete this presentation and moved onto his next tour, the journalism department.

To start off the journalism tour, Hawkeye Editors-in-Chief Stephi Smith and Isaac Otis introduced the student newspaper at MTHS,. They shared further information about the new technology the paper was granted earlier this year from the Career and Technical Education program.  Along with junior and Hawkeye staff member Jacob Allard who provided more details about how the Hawkeye utilizes technology for their reporting.

One of the data journalism stories Johnson showed Inslee and his team showed him was a story showcasing the different views in the MTHS mock election, the 2016 Washington state election and the U.S. election. This included the election for Washington state Governor, the two candidates being Inslee and Republican Bill Bryant.

While viewing the graphs, Inslee pointed out the red fraction of the pie graph and made a joke.

“Does that mean the people who voted red, aren’t allowed to graduate?” he laughed.

Mirroring the STEM tour, Inslee was cut short on time and finished off the journalism tour with a group picture with all the staff members in the room.

Inslee’s final tour of the day was a Jazz 1 performance, Darin Faul, the director of Jazz 1 introduced himself. He told Inslee about how Jazz 1 will be attending the Essentially Ellington festival in New York.

The first song the Jazz 1 band performed was “Such Sweet Thunder” followed by  “Stay On It.” Inslee ended this tour telling Andrew Sumabat how proud he is of the Jazz 1 band at MTHS.

“You have a great band and and I’m excited you all will be participating in Essentially Ellington,” Inslee said.

He also presented  the band with the 2017 Jake and Elroy Blues Brothers Award. This was a special Governor’s pin, demonstrating Inslee’s supports toward Jazz 1.

Inslee exited the building around 2:30 p.m. for Edmonds Community College for a tour of their campus as well.