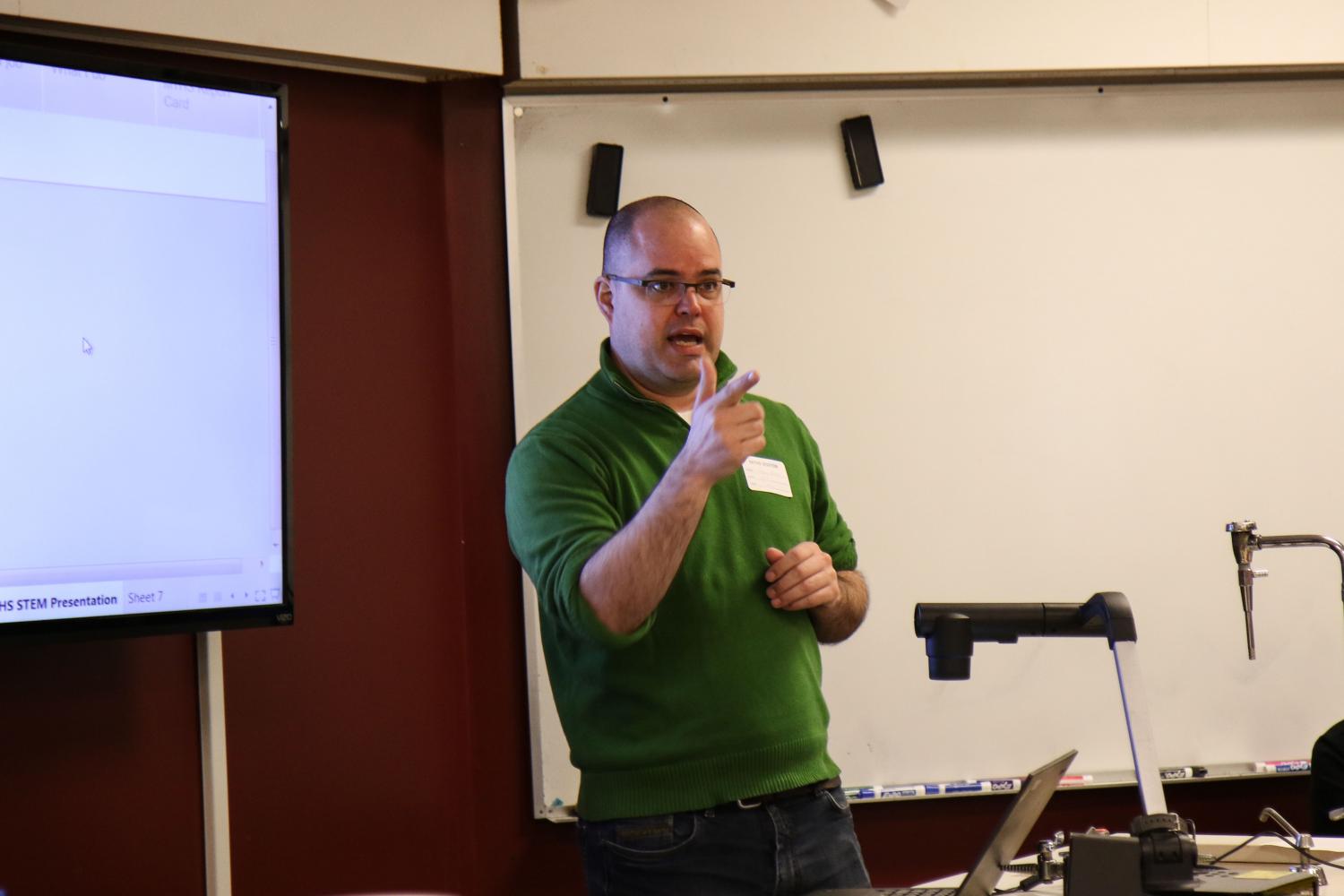 Jason Isley explains the steps to excelling in a STEM career.

Senior data analyst Jason Isley, who has been working at Walt Disney for seven years, met with STEM students during PASS today to explain to them how to succeed in STEM fields, starting with their high school career. He presented in room 125, hosted by science teacher Bryan Smelcer.

He walked students through a series of ideas to consider when going into STEM. His main points included discovering what students like to do, critical thinking, estimation, problem solving, language, luck and networking.

When faced with a problem, Isley recommends first identifying the problem and the solution, then finding what could be done to resolve it.

Isley said learning how to communicate with “math language” and technology is essential to working efficiently in STEM. He also believes “[people] can do everything right and still fail,” because he views luck as a factor in success as well.

When he was in college, Isley took math and science classes to “train [his]brain to think about things.” He soon set himself up for success by taking on job opportunities and becoming a network administrator.

However, this new job caused him stress as he had to drive four hours each day while also caring for his three kids. When he heard of a “men’s night” at his church, Isley befriended someone in a situation similar to his, who then connected him to a job at Disney, where Isley currently works.

As an analyst, Isley “takes information and turns it into knowledge.” He works with data driven decisions, where to spend money and determines how to improve services based on his observations.

Using information he found, Isley broke down the standardized testing scores of MTHS students over time, sorting it by demographic. He asked questions about why certain numbers were produced, leading to his conclusion that the data can provide a different way of looking at things.

Smelcer added on, saying that as a teacher he needs to understand different types of people to be able to adjust his teaching style accordingly so his students can learn better.

Isley personally described his journey into STEM as “following [his] passion,” which he said is “cliché but true.” Despite calling his job boring during his presentation, Isley is actually fascinated by data.

“I appreciate the pitfalls that data can represent and I like the creative aspect of reporting and I like people, fixing things and solving problems, which all play into being an analyst,” Isley said.

He encourages students to also “follow their passion” if they want to pursue STEM in the future.

“I hope they feel less anxious about STEM fields and that they learn it’s more about making yourself ready for opportunities than it is about getting a specific job,” he said.