The free and reduced-price school meal program, better known as the Free and Reduced Lunch program (FRL), started in 1946 under the National School Lunch Program as a way to provide meals and other resources for students in elementary through high school who face financial difficulties. Students must reapply for meal benefits every school year and can qualify in two ways.

A student can be directly certified by the Department of Social and Health Services, meaning they automatically qualify for the program due to already being on support from government programs. Otherwise, a student can fill out a family income application that determines their eligibility based on family income in comparison to their household size. A student may be approved or denied of meal benefits through this approach. 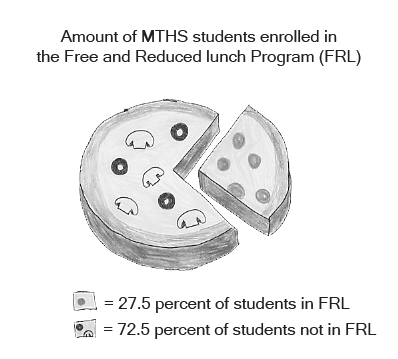 “There are students and families that find it hard to afford providing meals for their students and the most important thing is that hungry students can’t learn,” Lloyd said. “We want to provide a many healthy meals to as many students as possible so that they’re well nourished.”

According to the Office of Superintendent of Public Instruction (OSPI) Washington State Report Card, as of May 2016, 477,828 students in the state are enrolled in Free or Reduced-Price Meals programs, which makes up 44 percent of Wash.’s total enrolled students.

While almost half of Wash. state students participate in FRL programs, Lloyd believes a stigma exists around FRL, which she described as being “very near and dear to [her] heart.”

She said the stigma about taking part in the program is least prominent in elementary schools but becomes heavier as students progress to high school.

“I think some families feel embarrassed that they need to ask for help and that shouldn’t be the case at all,” Lloyd said. “Some students also feel like their classmates might look down on them if their classmates knew that they qualified for free and reduced-price meals.”

However, those beliefs can be dispelled as a student’s eligibility for the program is unknown to anyone besides the student’s family and the government.

“We do our best outreach efforts to families. One of the key messages that needs to get out is that a student’s free and reduced lunch eligibility or even paid meal status is completely confidential,” Lloyd said.

Furthermore, Lloyd said students shouldn’t be ashamed of being in the FRL program, because all students will eat lunch together as a community and no one can tell who’s receiving meal benefits or not.

When a student purchases a meal at school, there is no clear indication of whether or not they are in the FRL program. On the cash register screen, if the amount due says $0.00, it does not necessarily mean the student is in the FRL program. The monetary balance can also be interpreted as the student having enough money in their school account to buy a meal or it can mean the meal was prepaid.

The ESD serves about 2,300 breakfasts and 6,400 lunches each school day. According to their monthly P-223 Enrollment Data report of April 2017, a total of 35.9 percent of enrolled students in the school district participate in the FRL program.

Out of 1,249 students enrolled in MTHS for that month, 27.5 percent of them are in the FRL program.

Lloyd believes the stigma could be erased if free breakfast and lunch was provided for all students, regardless if their families are in need of it.

“[Free meals for all students] would be wonderful. I would love for that to happen because we serve nutritious meals; they’re good, they’re a great value,” she said.

However, the federal government can only pay for a certain number of meals due to budgeting. Many ESD schools participate in the Title 1 program, which helps to fund meals, among other things.

The Title 1 federal program operates with the objective of “serv[ing] the unique needs of children” from grades K-12, according to the OSPI website. Title 1 provides educational assistance to accommodate individual student needs, such as providing learning support, services to combat student homelessness, as well as free and reduced priced lunch programs.

Cedar Valley Elementary currently stands as the ESD site with the highest percentage of students in the FRL program at 77.6 percent, while Maplewood K-8 has the least with 6.7 percent.

The difference between the two programs is that the number of students who qualify for free/reduced lunch affects what the funds may be used for. The Targeted Title 1 program requires that school districts direct funds towards students who are “struggling the most to achieve standard,” according to the ESD website. The School-wide Target 1 program allows for school districts to serve all students, regardless of whether or not they may qualify.

According to OSPI, schools with a rate of less than 25 percent of its students who qualify for FRL are not required to have the program.

Every October 1st, the percentage of students who qualify for FRL are counted in each school. The number of students who need meal benefits will affect the school’s funding for the following school year.

Depending on the number of students who qualify for FRL, a school can participate in the Community Eligibility Provision (CEP), created in 2010, which would provide meals to all enrolled students at a school for free and without the need for applications.

The Food Research & Action Center (FRAC), lists a benefit of CEP as “Offering meals at no charge to all students eliminates stigma from any perception that the school meal programs are “just for the low-income children,” increasing participation among all students.“

According to the Community Eligibility Database provided by FRAC, seven ESD elementary schools are either eligible or near-eligible for CEP as of Sept. 2016. The numbers were determined by Identified Student Percentage (ISP), which is the percentage of students who are eligible for FRL and includes people who are “homeless, migrant, enrolled in Head Start or in foster care.” If the ISP of a school exceeds 40 percent, the school can participate in the CEP.

Despite the ISP for some ESD schools approaching the eligibility rate, it would be more financially detrimental than beneficial to implement CEP.

“In our schools, even our most needy school, we would lose money if we went in the Community Eligibility Program,” Lloyd said.

“When I finished the financial analysis for Cedar Valley, the result was that we would probably lose about $3,000 per month in reimbursement for that site or $30,000 per year. That is not something the district can afford to do and that’s what drives the decision to not implement the CEP,” Lloyd said.

While Lloyd believes free school meals for all would erase the stigma around getting FRL, the ESD cannot participate in the CEP due to it being more detrimental than beneficial.

Being in the FRL program can give students more than just a hot meal. Aside from meal benefits, a student can receive other financial benefits such as getting fees waived or discounts for classroom supplies, sports participation, Chromebook insurance, musical instrument rentals and testing, among others.