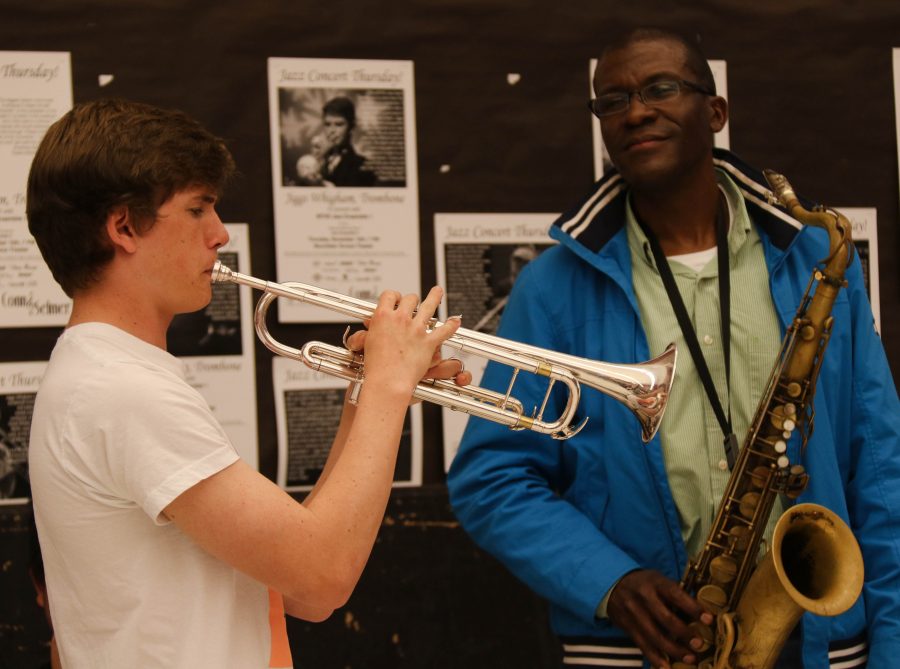 Williams works with Finn O'Hea to improve his soloing skills during an energetic number in the second half of the clinic.

Each of the 15 high school finalists entered in the 22nd Annual Essentially Ellington Competition & Festival (EE) worked alongside and learned from a professional jazz musician from New York, flying to Washington on behalf of the Lincoln Center Jazz Orchestra (LCJO).

Former LCJO member Todd Williams visited the MTHS Jazz Ensemble 1 (Jazz 1) for an intense rehearsal on Monday, April 17 in preparation for the Essentially Ellington festival in mid-May. Williams now teaches as a music educator at Indiana Wesleyan University and is proficient in playing a number of different instruments, including saxophone, flute, clarinet, piano, drums and bass.

Once the session began, Williams immediately put Jazz 1 to work, starting off with “Bojangles.” He congratulated the band on learning this piece and style of music and putting it in a “new, modern context” that “has a nice feel to it.”

He recommended leaving more space in solos, adding vibrancy and texture, as well as making a “boom from beat one.” After giving the band feedback, Williams noticed that junior bassist Sophie Parsons’ instrument lacked balance and jokingly suggested using a Converse sneaker as a makeshift rockstop.

Williams then gave the piece a try and played it through with only the rhythm section accompanying him, impressing Jazz 1 with his sound.

Jazz 1 followed with “Such Sweet Thunder” that Williams quickly cut short due to the song having too much space once again, meaning he wanted the instruments to respond to each other and have a conversation. He worked closely with the saxophone section to establish a uniform way of playing with vibrato to “give motion to notes that are not moving.” On the second playthrough, Williams said he already heard improvement.

The band then moved on to “Stay On It” and effectively incorporated Williams’ advice by incorporating different techniques to fill space.

“You guys are swinging for sure,” Williams said.

The rhythm section played the tune again, but this time, Williams encouraged students to solo whenever they wanted.

“For those of you who don’t usually solo, just jump in. It’s like swimming,” he said.

Afterwards, Williams ended the song with his own solo. He compared playing music to language and speaking, with each interpretation of notes having different meanings and feelings.

“You have to be the words of the song,” Williams said. “It’s like you add [words] to something [the audience] can relate to.”

Williams said he is thrilled that Jazz 1 was accepted to EE and is proud to have worked with them. He acknowledged the amount of time and dedication Jazz 1 put into preparing for EE.

“In order to learn about this music, they have to investigate aspects of music, aspects of history and aspects of having to work together,” Williams said. “It’s a real collaborative effort.”

He explained that exploring jazz is “a little bit bigger than learning just tunes.” He hopes the band will learn to understand the history and culture behind jazz during their journey to EE.

“It’s essentially learning about America’s past and America’s future,” he said. “Early America had to do with settling in a new country, working out the differences of everyday life, battling through slavery, battling through civil war. Honoring that experience comes the idea of multiculturalism and people being unified despite their differences. All of these things are expressions that jazz has to do with.”

Williams admires the “fantastic rapport” of Jazz 1 and feels MTHS is privileged to have such an advanced group. He hopes EE serves as an opportunity for Jazz 1 to grow as musicians and people.