Science teacher Penny Lefavour shows off the work of her BioTech class.

Not many people can say they’ve traveled throughout Europe, or that they’ve been through the first rate experience of staying at a hotel wired with radios to eavesdrop on every conversation.

STEM/Science/English teacher Penny Lefavour is an exception to that.

Having an extensive teaching and music background, Lefavour has been to many places throughout her lifetime. Ranging from the East Coast to the West, Midwest, and even out of the country. Why she’s been to these places, that’s her story to tell.

Lefavour grew up commuting between two locations in the Midwest through an excruciating eight-hour drive. While she lived in her grandma’s house in the suburbs near Chicago, she was surrounded in a Spanglish-speaking neighborhood where the majority were black and Hispanic. Her mother simply didn’t want her kids to attend a one room schoolhouse, which was the only thing available in the rural area her dad grew up in northern Wisconsin.

Despite that, her family still visited their farm often. Whether they had breaks or vacations from school, they would spend the majority of the time surrounded by 400 cows and doing daily chores on the farm.

Her love for music came from her family’s influence. She never grew up with a lot of money, so being able to have instruments around the house was a gift. She performed mostly in her church’s choir at a young age. Her mom played the accordion and her five brothers (one has passed away) each were able to play one to two instruments.

“My dad can play the radio,” Lefavour said, “and he’ll proudly tell you that.”

Ironically enough, her grandparents from her dad’s side were the professional musicians in the family. Her grandma was a top notch organist/pianist, while her grandad played the banjo and even had the opportunity to play at the Grand Ole Opry, which he declined.

During elementary school, she and a group of friends put together songs and dances and would perform for their school. “Grade school was really flexible and people got to form clubs and groups,” Lefavour pointed out. 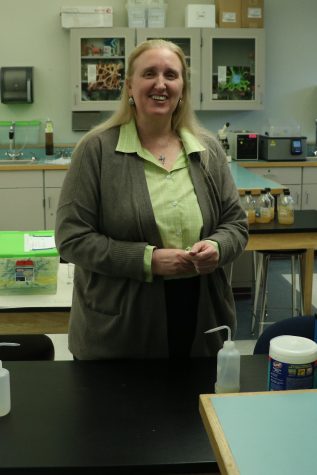 She would also practice playing the piano and would receive lessons from her first grade teacher. When her teacher retired, she gave Lefavour an 1858 Steinway piano.

“Now I get to teach lessons [on the piano] and still play it,” Lefavour said.

Throughout middle school, she was part of a musical group known as madrigals that played renaissance drums and “recorder/ocarina type instruments.” The group made money off their performances as they traveled to different venues and funded their middle school’s music program.

When attending high school in the late ’70s, she was very musically active. She was in a “folk-singing” group and performed dance numbers with them. She also sang in numerous choirs and continued to take piano lessons.

“Piano and voice are my music degrees,” said Lefavour.

In 1988, she toured Europe for about a year with a jazz group she was singing with known as Sound of Five. One of her memorable moments in Europe was when they went to Slovakia, behind the Iron Curtain boundary in Europe. There, many of the customs differed from those in the United States. They were also limited in what they could do in their performances.

“The girls normally wore red [outfits and] they weren’t allowed to wear them because they were too bright. We [also] couldn’t perform one our songs [because] they didn’t approve of the lyrics,” Lefavour said. “I’ve never been censored before.” It was also in Slovakia that she stayed at a hotel where the rooms were wired with eavesdropping radios.

Despite that, it was exciting to her to make connections with people. They got to know people at their concerts no matter whether they had a big or small audience. She says she still is in contact with some of them.

After her jazz tour, she performed in various cities with different musical groups, such as Los Angeles, Boston, South Carolina, New York at Carnegie Hall, San Diego, Chicago and more. In one experience in Chicago, she performed with the Chicago Symphony Orchestra and the Waukegan Symphony Orchestra, enjoying singing with that type of environment. Performing with an orchestra is “loud and full” and “feels like you can float on top of the music when you sing,” Lefavour explained. She describes the music as being active and “living in [your] space” while “you’re just adding your voice to the orchestra.”

Currently, she performs with two music groups – the professional group Wellspring and the Mill Creek Chorale.

But alas, going down the pathway of a full time musician is a “tough road” and she decided that she wanted to continue her teaching career and has gained much teaching experience throughout her lifetime.

Growing up in the Midwest, she’s taught in numerous places. She taught in a K-8 school in northern Illinois and taught all the science classes there. After a while, she moved to teaching in the Chicago suburbs and later came to Washington to teach at several districts. At the Northshore School District she also became an administrator for a while. She then alternated between Edmonds School District and Federal Way, before finally settling in at MTHS.

Lefavour teaches regular and AP biology, STEM English 12, and Biotechnology and has been teaching at MTHS for 10 years now. She is also the advisor of the ECO Club at and for the STEM girl’s club called IATRIX 21 that hold their meetings at the Shoreline Library.

“I love teaching sciences where students can actually think while they’re learning and then taking an idea of their own and trying it – they learn a little bit, think a little bit, and then try something,” Lefavour said.

Teaching all of these science classes allows her to watch her students experiment, especially in the upper levels. She gets to “see them grow” and really “loves being in a classroom.”

She’s also conducted research studies at the Fred Hutchinson Cancer Research Institute, an intensive week of study at the Institute for Systems Biology, and has published field research about woodpeckers in Illinois.

Her reasons for being a teacher come from her grandpa being illiterate during her childhood. When she was younger, her grandpa would always “read” to her from a old newspaper he would carry and stressed the importance of being literate. After he died, she found out that most of the news he had read to her was made up. It bothered her that her grandpa never was able to read, but understood that he never had that opportunity to learn.

“I knew how much I got from reading and how much my family got from reading- and I couldn’t imagine not being able to read,” Lefavour said. From a young age, she wanted to make sure that everybody around her “could access the world around them through reading and education.”

Ever since then, she loves being in a classroom and getting to see her students grow.