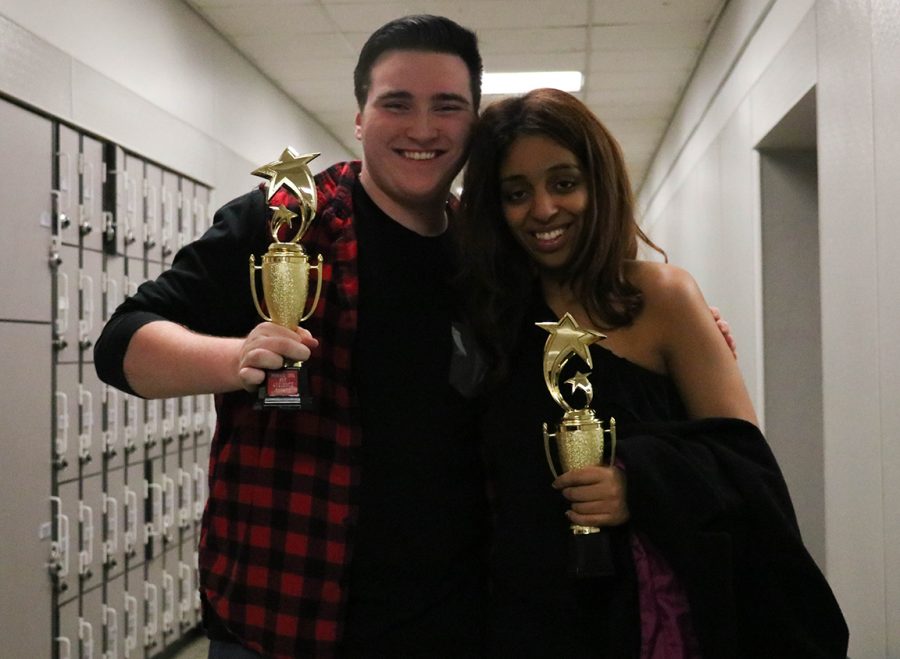 The 2017 Terrace Idol event was a big hit going on all throughout the month of February as over thousands of dollars were made from ticket sales. This annual singing competition was showcased in three rounds, each held about a week apart, bringing in talented singers from all around other districts to come and show off their voice in the MTHS theater. The MTHS 2017 Senior Class ASB hosted Terrace Idol as a fundraiser, which many people showed up to support their local singers, having a packed audience each night.

All kinds of performances were displayed, creating a variety of music in the show. From singers performing different genres of music to how they presented themselves up on the stage, each brought out their own style and energy that had the crowd going. There were even contestants that had their own arrangements of songs, whether they performed with instruments or with accompanists.

Judges were always polite and voiced out their thoughts on each performance, admiring or giving out advice on how the performers can better improve. Throughout the whole event, there were six judges as the judging panel was a different set each round, each with their own extensive music background.

The special performances during the judge’s deliberation were also well enjoyed by the audience as each round brought out old faces and exciting acts. In one performance, the MTHS Hip-Hop Team performed their own self-choreographed dance number called “Hawks Through the Decades.”

The first round started off with 20 contestants. Out of those 20, ten moved on to the second round, bringing in more energy and adding their own rendition of popular songs.

One performance in the second round by third-round finalist Praditha Halstad included a percussion and guitar accompanist that did a rendition of “Hotline Bling” by Drake. Other performances included jazz versions of songs, guitar and ukulele playing and old classics such as “Hallelujah” by Jeff Buckley and more. These songs incited support from the crowd, along with shouts of encouragement aimed toward the performers.

The number of contestant in the second round was cut in half, moving five finalists to the third round and intensifying the competition. Each contestant was to perform two songs in the finale, from which the judges and the audience would choose two winners: the Judge’s Choice and the other the Audience’s Choice.

In this year’s Terrace Idol competition, sophomore Rackeb Kelemu won Judge’s Choice and senior Tanner Rook was awarded the Audience’s Choice. Each contestant had a lot to say about their overall experience and final performances on the Terrace Idol stage.
The winner With the Mariah Carey Voice
She was shocked, thrilled, and excited when she was announced as the Judge’s Choice for Terrace Idol.

“I honestly couldn’t believe it because it was something that I wanted since freshman year,” Kelemu said.

Being a contestant from last year’s Terrace Idol competition, as well as one of the finalists, she’s acquired a lot of experience and implemented much of it into her performances this year. She took the advice from the 2016 Terrace Idol judges about improving on body movement and stage usage, saying that “it’s the whole factor [they look for], not just the voice.”

Growing up with a music-loving family, Kelemu’s love for music was often inspired. She started out her musical journey as a “fun sort of thing” when she was 4 or 5-years-old. She explained how her older sister and mom love singing and how they would always sing together, playing music around the house and just having fun.

Music started to slowly become something she wanted to take more seriously, especially after she got equipment for her performances and posted a few videos on Youtube. Over time, singing became a passion for her.

Her Terrace Idol performances required a lot of preparation and effort, she said.

“When it comes to any performance, you have to [have] good preparation for it [and] give it time because nothing comes without practice,” Kelemu said.

What helped her was listening to others, whether her peers or family members, singing and receiving feedback from others, such as her mom. The first round, it was “definitely the most nerve-racking” for her, being a new year and the stage not something she was used to quite yet. But each round gradually got easier, she said.

“Terrace Idol is a great opportunity [for musicians],” Kelemu said regarding those who want to practice performing on stage. She also expressed Terrace Idol as a way to meet other people and fellow performers.

During her experience backstage, she described everyone as “a bunch of goofballs” and supportive of one another. It was a really fun experience for her and meeting these new people felt it was “a big family” for her.

“Music is a very powerful thing [that] connects people,” she said.

In the third round, finalists had to perform two songs. Kelemu had picked “Dancing On My Own” by Calum Scott as her first song and “I Will Alway Love You” by Whitney Houston as her second. The first song, she explained, was one she’s always loved after first hearing it on the talent contest show Britain’s Got Talent.

“The emotion [Scott] got out really stuck to me,” Kelemu said.

Her rendition of the song incorporated sophomore Reed Lyon performing a contemporary dance alongside her and junior Sophie Parsons playing on the piano to heighten and express the emotions more in her performance.

For her second choice, she greatly admires Whitney Houston and said she wanted to perform a song of hers that has been considered one of her greatest hits. In this smooth arrangement, Kelemu added a saxophone accompanist to appear in the middle of the performance as she wanted to add a “surprise element.” Her performance was based upon the foundation of the original song as it still started out gentle and gradually grew more powerful.

She said she had an amazing time during her Terrace Idol experience and is grateful for the people she met and all she’s learned to better improve herself as a performer.
The Theater Kid With Style
Performing in musicals for the past five years and always retaining his love for singing , Terrace Idol was the experience Rook needed just before he ended his high school career. This year was the first time Rook had competed in Terrace Idol as its was his final year and he wanted to try something new.

“To actually see people vote for me and actually know that people liked what I did was really cool,” Rook said.

The stage is a familiar territory to him, he explained, as he performed numerous times, whether at the MTHS or local theaters. His musical career began with his family. His grandfather was a music teacher and his dad showed him all genres of music. He was exposed to a variety of artists growing up, such as rock bands Queen and AC/DC, which showed him how “crazy vocals” and theatricalities can improve a performance.

He then started his musical theater journey the summer before his freshman year when attending a theater summer program and performing his first musical called “Camp Rock.” Overtime, he performed in other musicals such as “Footloose” and was casted as the comical cowboy, Willard, in that same program. He also played the lead male role, Jonny Warner, in the recent MTHS Drama performance “Zombie Prom.”

Musical theater is something Rook wants to pursue throughout college and later as a career, he said. He incorporated a lot of his theatrical experience into his performances. In one performance throughout the first round, Tanner performed Ladies’ Choice from the 1980s musical Hairspray. In this performance, he  danced around the stage, using the microphone stand to his advantage and having a theater technical assistant adjust the lighting to further heighten the performance.

In the third round, his two song choices included Jailhouse Rock by Elvis Presley and Somebody to Love by Queen. His first song was brought on by the influence Presley left on him  regarding singing and stage performance. Rook felt he needed to honor an iconic Elvis Presley song with his performance and Jailhouse Rock was the one that popped in his mind. He felt he could have prepared more for the first song, but still enjoyed performing it.

Doing a Queen song was a must for him as Somebody to Love is one of his family’s favorite songs that they’ve always admired. He said he’s always wanted to perform it in front of an audience and Terrace Idol was his chance.

Rook loved the competitiveness of Terrace Idol, along with the support from the other contestants. However, he wasn’t expecting to advance so far in the competition. When he was on stage, he “just wanted to have fun” with his performances and “sing these [kind of] songs” simply because he could.

Learning from the judges’ critiques, he plans on taking better care of his voice and learning to control his breathing while singing. He also plans on singing more upscale and extravagant songs to better improve as a performer in the future.
Advice from the winners
As the two winners exit the Terrace Idol stage, they encourage musicians to go for their passions and not be afraid to pursue music more seriously.

Kelemu mentioned that failure shouldn’t be the reason why musicians don’t choose to take on the stage.

While performing, Rook said a singer should find songs they enjoy and know they can “own.” With this mindset, he explained, performers will execute a better presence on stage.