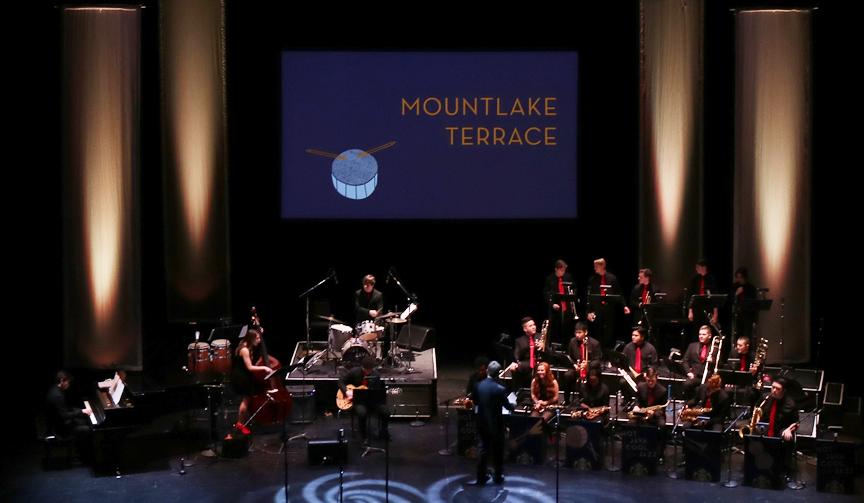 Jazz 1 performs "Such Sweet Thunder," a song the band has played in the past.

The MTHS Jazz Ensemble 1, or more commonly known as Jazz 1, performed for a full house at the Paramount Theatre in Seattle for the 22nd annual Hot Java Cool Jazz (HJCJ) concert. The event, hosted by Starbucks and Kennelly Keys, took place on Friday, March 17 as local high school jazz bands entertained a crowd of just under 3,000 people.

Bellevue (BHS), Edmonds Woodway, (EWHS), Roosevelt (RHS) and Garfield (GHS) High Schools performed alongside them, helping to raise over $60,000 that would be donated back to the five participating schools.

EWHS was awarded a $500 gift certificate from Kennelly Keys for selling the most HJCJ tickets at their local Starbucks. Prior to the show, Jane Addams Middle School’s band performed in the theater lobby.

The announcer described the event as a way to “celebrate the incredible talent that’s right here in our hometown.”

Before each school’s performance, a brief introduction video was played, showing the preparation process for HJCJ as well as highlighting the students’ love for jazz.

MTHS took the stage first with the introduction video including interviews from seniors Nathan Reeber, Kaylee McGovern and Andrew Sumabat.

“We kind of take our hearts in our hands and give it to our audience,” McGovern said in the video.

Jazz 1 opened with “On the Sunny Side of the Street” which spotlighted the trombone section as they played altogether then each trombone proceeded to solo one after another.

Afterwards they performed “Such Sweet Thunder” with solos from Sumabat on trombone and trumpet, junior Gian Neri on guitar and senior Finn O’Hea on trumpet.

As O’Hea prepared for his solo during the song, Faul teased him for not tucking in his shirt. Despite not following the Jazz 1 dress code, O’Hea kept his shirt untucked while onstage.

After the number ended, band director Darin Faul thanked Starbucks and the audience for supporting music and arts in the community, and gave a mention to his parents for attending HJCJ.

Faul had asked Jazz 1 sophomore and drummer Kieran Faris to compose a song specifically for HJCJ. His product, “Sin Nombre,” or “Untitled” in English, was the final song of the set MTHS performed.

“Sin Nombre” was an energetic, up-tempo piece that featured Sumabat on trombone, Neri on guitar and senior Dylon Rajah on tenor saxophone.

BHS then tackled the stage and performed “One Day They Came,” a piece their jazz band adapted that took a political approach that was inspired by the Holocaust by featuring spoken word and a chant.

Once BHS finished their set, RHS who has attended HJCJ since it began, performed “The Blues Machine,” a song band director Scott Brown hadn’t taught since around the 1990s, he implied.

Their performance was followed by a short intermission, with EWHS performing next.

They played a unique set of songs, featuring a vocalist in “Until I Met You” and another in “Rocks in My Bed.” Because some members of their jazz band have planned a trip to Cuba, they also played a Cuban-inspired piece. They closed their repertoire with a upbeat song that ended with an extremely elaborate saxophone and drum solo that caused some laughs from the audience.

Lastly, GHS, who has also attended HJCJ all 22 years, went onstage to close the show. Their songs included various saxophone solos and their band director Clarence Acox Jr. called the audience “hip” for appreciating the pieces they performed by composer Quincy Jones.

Editor’s note: This article will be updated with photos of Hot Java Cool Jazz by Wednesday, March 22.