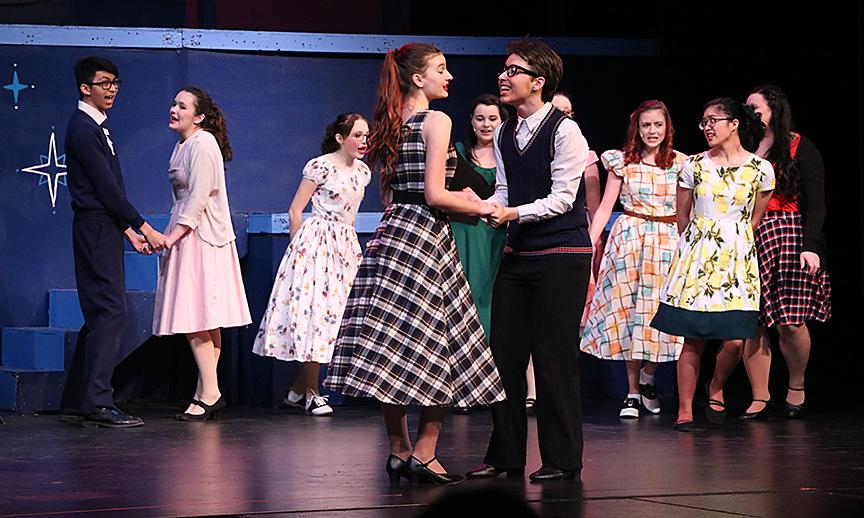 Peja Shymko and Flynn Thomas dance in center stage as they sing “Good As it Gets” with Toffee and Kids.

From Wednesday, Jan. 18 through Saturday, Jan. 21 the MTHS drama department presented the musical “Zombie Prom” in the school theater. The production premiered at 7 p.m. each night and contained a total of 22 songs performed by 30 actors. Additionally, nearly 30 other students worked behind the scenes in jobs such as operating the lights and sound.

Directed by drama teacher Jeannie Brzovic, the musical was based on the story of the same name written by John Dempsey and Hugh Murphy. Choir teacher TJ Sullivan directed the music for the production, which was composed for performances of Zombie Prom by Dana Rowe.

Taking place at Enrico Fermi High School in the 1950s, the story centers on the student Toffee (Abigail Apana) as she falls in love with the rebellious student Jonny (Tanner Rook) who decides to spell his name without the traditional letter “H”.

However, the principal of the school, Ms. Strict (Elysiana Batingan), and Toffee’s parents (Emma Dortsch and Eli Longacre) pressure Toffee into breaking up with Jonny, who becomes severely upset and commits suicide by throwing himself into the nuclear power plant of the city.

Toffee falls into intense grief, but Jonny hears her sorrow and rises from the dead, committed to winning back Toffee returning to his life at Enrico Fermi High School.

However, Jonny is not allowed to return to school by Ms. Strict, who bans him from all school property. Toffee rejects him at first, but he is assisted by his friends and reporter Eddie Flagrante (David Hill), and with their help, Jonny eventually wins back Toffee and is allowed to return to Enrico Fermi High School. The musical ends with Toffee, Jonny and the rest of the cast dancing in the senior prom.

The performers and crew prepared for over four months for the production of Zombie Prom, and according to performer Ana Arnas, performing after so much preparation was “very emotional for many of us, but in a good way.”

Matt Correa played multiple roles throughout the performance, including a student of Enrico Fermi High School, and a copyboy in the office of Eddie Flagrante.

“Many of us started out the rehearsals as inexperienced, but by the end it felt like we almost over rehearsed,” said Matt Correa.

The performance drew large and enthusiastic crowds, and after the Friday performance, performer Peja Shymko expressed her gratitude for such a “great and interactive audience.”

Liliana Reid, who played Coco, one of Toffee’s close friends, said she “was very thankful for such an enthusiastic ending from such a great audience.”

“Zombie Prom” was a great success for the drama department overall, with some nights producing over $2,000 for the department.