A deeper look into the camp at Standing Rock

Through heat from 96 to -20 degrees Fahrenheit, the tribes have been camped by DAPL’s production to save their water.

People from all over the country have gone to Standing Rock to show their support for the Native Americans. While some seem to be there to bring media attention to protests, others are there to help the tribes and protesters survive in extreme weather.

Rane Stone, a Seattle musician and activist for the Standing Rock community, or a “supplier of humanitarian aid to human beings,” has gone to the camp several times. His goal is to support the tribe’s living situation with donations from friends, family and fans. He has nearly devoted his Facebook page to the fight to update people on Standing Rock.

Stone said people donate to websites such as Sacred Stone Camp. The money from there has been going to legal fees.

“The problem started becoming these people were not doing elder sanctioned protests, they were doing their own protests,” Stone said.

The fees go to replacing razor wire or cleaning up after other actions toward DAPL. These events are viewed as property destruction and the tribes are fined.

“I was going to the camps and addressing the problems as they arose instead of it just being put into a fund that then gets appropriated,” Stone said.

Melina Eberhardt has also shown immense support to the Standing Rock tribes. She’s an activist for the community and helps provide humanitarian aid with Stone. She keeps her Facebook friends updated on the situation in North Dakota.

Eberhardt said that at first her dad thought she was going out to protest on the front lines, but he learned that after a couple of trips she wasn’t. She said that he began to ask questions and understand the “severe conditions” that the natives are living in.

“Other people might be there to protest, but there’s a bigger picture for me,” Eberhardt said.

Eberhardt said that driving up, the DAPL lights block out the sky, but at the camp you’re greeted by tribe members who said “welcome home,” after only visiting a couple of times.

Stone and Eberhardt visited Standing Rock for their third time, leaving from  Seattle on December 18 and arriving in Seattle once again on January 4.

But the trips to Standing Rock didn’t start as serious as they’ve become.

When his friend asked him to go to Baltimore and drive her daughter’s car back to Seattle, across the country, he decided to stop at Standing Rock and see what was happening as it was on the way. 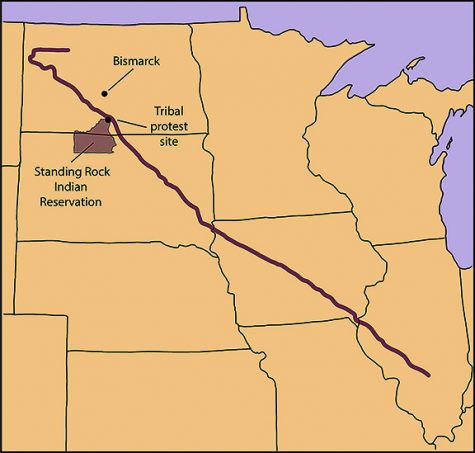 When Stone decided to visit Standing Rock, he told people about the trip and originally planned on going for a day.

“I saw a buddy of mine, Mic Hoskins, who’s kind of like a band promoter… and he was doing a Facebook live up on [a] hill, watching the protesters go down towards the bridge. In that Facebook live, I saw that on the other side of the bridge [there were] armored vehicles and guys in full riot gear with their rifles drawn, pointed at these people.”

When he saw the Facebook Live video, he wasn’t educated on the situation in North Dakota. Stone had heard of the actions towards the Native Americans, but seeing it was different.

Stone, like others, didn’t know what the mainstream media didn’t cover.

He contacted Hoskins and was able to stay where he had before. Before leaving, Hoskins gave Stone the general camp layout for the trip.

Soon Eberhardt joined Stone to Standing Rock. She said she wanted to help the American Natives after they helped the Hawaiian Natives with the Thirty Meter Telescope, an International Observatory, that was meant to be drilled on top of Mauna Kea in 2014.

“The land is considered sacred land,” Eberhardt said. “[It’s] similar to what is going on at Standing Rock.”

Driving into camp was beautiful, according to Stone, but the kitchen was shocking. The tents had dirt floors and no way to save food in the heat.

Hoskins educated Stone on the natives’ living situation. There was supposedly only two people in the kitchen feeding 150-200 people three times a day.

Along with the lack of workers, Stone said they had been serving potatoes, beans and rice, possibly for months.

“I had had two couple of really good Jar of Flies shows and [I went to] Walmart that night and got [around] 200 pounds of meat,” Stone said.

After this realization, Stone posted the situation on Facebook. He said he was fortunate to have people send in donations. Within the first week, Stone raised over $6,000. He got food, meat and tools to cook with.

“How many times can you eat potatoes and beans and rice? Everyday? I mean, you just don’t feel like a human being,” Stone said.

A construction company came to the camp and donated time to put in false floors, packed with hay, so the wood wouldn’t freeze. Stone also got standing heaters for the kitchen and more propane tanks.

“That’s when the energy shift started changing. We [had] just left, spirits were high and that’s when [DAPL] did that direct action [of] spraying the people with the water,” Stone said, soon to return.

Eberhardt and Stone had one encounter when they were in the kitchen tent and saw a woman making apple butter who seemed to be crying. As they spoke with her, Stone said they had discovered the woman had been maced the day before. He said she had her arms out, trying to cover an elder, when a police officer sprayed her with mace.

“[The mace is] water activated, so you’d splash your eyes with water and that’s when the pepper spray [would activate]… [very] eye-opening,” Eberhardt said.

Stone recognizes the treatment of the tribe members and uses it as motivation.

Stone said he was thankful that other people went to help heal the Native Americans after being sprayed with water, shot by rubber bullets and police dogs attacked the protesters.

As soon as the camp progressed forward, winter hit.

“When the blizzard hit, they just, everything just shuts down. What’s normally an hour to Bismarck now took 2-3 hours because you couldn’t see 15 feet in front of your face,”

Although Stone was tired, he didn’t care because “these people are in it,” and he would keep driving until the people in Standing Rock had what they needed.

Stone said that during any sort of “free-time” he had, he would search up life hack, “DIY” videos to find alternative tools.

One “DIY” he made was with cinderblocks to make “rocket stoves,” with little fuel. He also found a place where you could purchase five gallon hand-cranked clothes washers.

“I just really let the universe guide because everywhere we went, we were finding things on clearance,” Stone said.

Eberhardt gave an example of being in a store and asking for help, only to be denied with the item nearby.

“If you’re there with the right intentions, mother earth knows that, water knows that, and they will treat you well,” Eberhardt said.

It was common for the two to lie about their intentions at a store to get help.

According to Stone and Eberhardt, many places wouldn’t even help them if the workers knew they were supporting Standing Rock.

“You have to go around that racism,” Stone said.

Many things are unknown within Standing Rock, DAPL and the politics surrounding the pipeline. Stone believes he has one thing figured out, even if President Barack Obama denied an important permit needed for the pipeline and gives the company a daily $50,000 fee.

“They’re gonna build it, and they’re not gonna re-route it,” Stone said. “That was just a political victory, it’s not something that [will] actually do anything because the government did not provide any way of enforcing other than a $50,000 fine a day.”

Stone said that with how much money the company will make with the oil, it’s “like being fined to do something and it costs you 50 cents.”

Stone said donations are appreciated, but the only way to stop DAPL is to speak out.

“We are on this planet, it’s like a boat, and we are drilling holes in the bottom of it. We don’t get to get off. We either sink with this boat, or we fix it. And we’re about fixing it.”

Stone and others believe President-elect Donald Trump will fund the pipeline.

There are more instances where Trump’s support of the pipeline is shown through his presidency. Trump has invested stocks in DAPL’s company, but said the stocks don’t affect his presidential support. He said the pipeline helps in “promoting policies that benefit all Americans,” according to Michael McLaughlin of the Huffington Post.

Stone said that people may think that Standing Rock is a lost cause because the major news headlines being misleading. He believes that it’s not over, and if people take a stand for the tribes, and are successful, it can be “a template of how to do this all around the world.”

Stone said that despite people giving up on the cause, he thinks that the DAPL and Standing Rock situation could affect many.

“I think that this is the beginning of, if not a physical, this is the definite beginning of a spiritual civil war in this country,” Stone said. “I really don’t want it to be a physical one, I don’t see it being put past because I know the other side is very violent and they don’t like people praying to anything other than their god, even though we’re supposed to be a country built on the freedom of religion.”

Eberhardt and Stone are very passionate about supporting Standing Rock.

Eberhardt said that the best way to donate is through trustworthy PayPal accounts. GoFundMe and other sites will charge the user a certain amount, so while it says they’ve raised $2,000, they have about a $200 fee.

Stone has been seen as a trustworthy source because he saves every receipt for purchases that involves donation money and makes sure to keep people updated on what is needed for the camp members.

But there are other ways to show support. Eberhardt said that everyone has a voice, especially youth on social media.

“This is a perfect opportunity for everyone who doesn’t think they have a voice to write their senator or congressman, or to tweet to the news anchors of every major news station, or to actually use their voice in whatever small way. Even if your voice shakes, use it,” Stone said. “Don’t sit there in silence and just let it go by, because silence is the enabler of evil.”

The two made it clear that the youth of America, and the world, are the way to stop DAPL, or the black snake.

“That’s the whole prophecy of Sitting Bull,” Stone said. “[We] saw it was going to be the youth from around the world coming together to stop the black snake. I mean, no pressure, kiddo, but it’s all on you.”