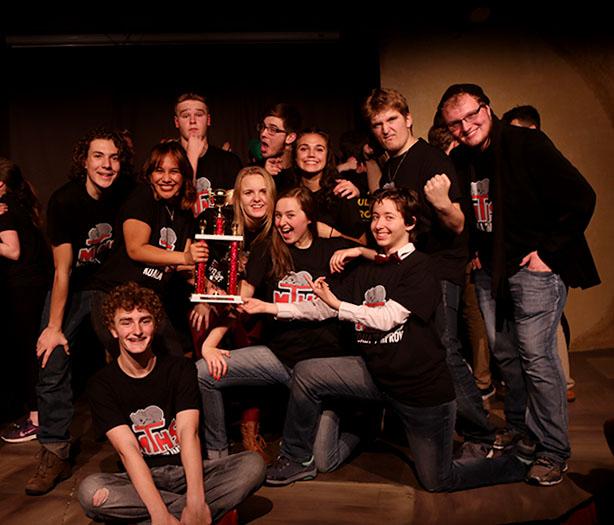 At the famous Gum Wall in Pike Place Market, Unexpected Productions’ Market Theater hosted the 19th annual Hogan Cup on Monday November 21st .
The Hogan Cup is an improvisational championship for high school teams. Schools involved are helped by Unexpected Productions coaches. Unexpected Productions is an improv company in Seattle that specializes in comedy and theater sports.
The four high schools that competed as finalists were Everett, Holy Names, Inglemoor and Mountlake Terrace.
Throughout the performance, the improvisors requested locations, relationships, objects and more from the audience as aspects to bring into their skit.
The night began with a warm-up activity where selected members from each team played an improvisation game to carry out a story. When the host of the night pointed at a player on stage, they were to verbally continue the story, and they stopped talking in the middle of the syllable they were on when the host stopped pointing.
After this there were three competition rounds made up of similar activities where only a few members from a team performed at a time. Because there were no props, the improvisers acted as though objects were on stage when the story required so. Teams were judged in three categories; technical (how carefully the rules of the activity were followed), narrative (story development) and entertainment. The scores were based on a one to five scale in each category.
In the end, MTHS’ theater sports team, “Koalaty” Improv, ranked third place.
“I’m really glad the team made it this year and had the opportunity,” Junior Abbie Apana, captain of Koalaty said.
MTHS alumni class of 2016 and former theater sports member Kimi Fenn came for the show along with other former members.
“[I take] any chance I get to see good improv,” Fenn said. In addition to providing entertainment, Fenn said improv is a good thing to be a part of.
“[Improv] works past competition, it’s a life long skill you can carry with you. Thinking on your feet is a really good ability to have,” Fenn said.
Last year’s MTHS theater sports captain Sage Cameron was at the event volunteering for Unexpected Productions.
“I’m very proud of the people we helped elect. They gel noticeably. [Koalaty is] on the same level 23/7; there’s the occasional problem, but at the end of the day they trust each other immensely. It creates better improv,” Cameron said.
Ron Hippe, a performer/improviser who’s spent 26 years with Unexpected Productions is currently an outreach specialist. He works with other companies and businesses as well as educational programs including high schools.
“I think it’s a really great program to help with high school drama programs, especially with like minded drama groups.”