Terrace wins battle of the birds 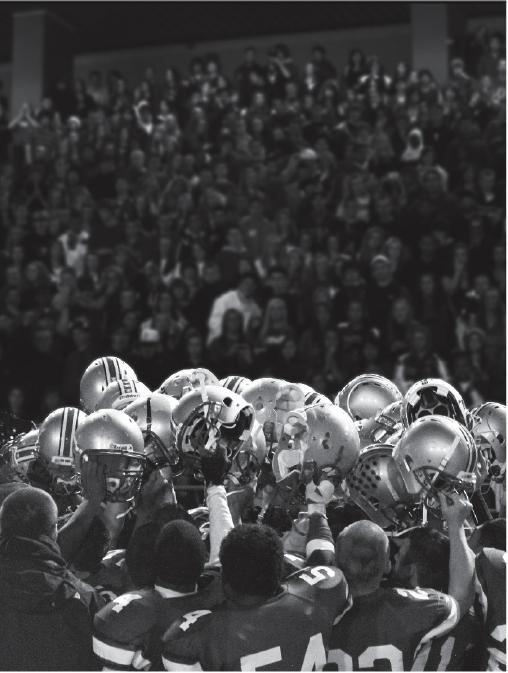 Terrace Hawks raise their helmets in victory late friday afternoon on Oct.22. With a swooping victory against the Everett Seagulls

There’s no bigger game than the homecoming game.  For the Mountlake Terrace football team, it was much more than that.  A win would put them one step closer to the playoffs; a loss would stop their pursuit of the playoffs short and send them home.  In any case, the Hawks came out ready to play and showed their mettle.

The Terrace defense came up big in a thrilling fourth quarter to hold off the Everett Seagulls for a nail-biting 14-13 victory in a WesCo 3A showdown on Oct. 22 at Edmonds Stadium.

With Everett scoring on a 7-yard touchdown pass, the Seagulls had a chance to even the game and possibly send the game into overtime.  However, a normally routine duty for the Everett kicker quickly became a nightmare.  The extra point attempt was low and bounced off of a Terrace lineman, an scene reminiscent to a blocked field goal during last year’s homecoming victory over Kamiak.

“I was just praying that someone would block it or they would miss it.  And it happened.  I didn’t even celebrate, I was so shocked,” senior David Turner said of the missed kick.

Everett’s onside kick attempt with 28 seconds remaining failed, and the Hawks ran out the clock to seal the victory.  But it took all 48 minutes to pull out the victory.

Mountlake Terrace coach Tony Umayam was pleased with the way his team reacted to the early adversity.  “I’m proud of the fact that they played all 48 minutes.  We gave them an early 7-0 lead in the first quarter and it would be easy to hang your head on that. But our guys are tough and then they fight. Our defense really stepped it up when they needed to.”

The defense was key to the victory, especially during tough situations in the fourth quarter.  Everett had second-and-goal from the 11, when senior defensive back Martinze Johnson leaped up high for an interception in the back of the end zone to stop the drive.  Later in the fourth quarter, with pressure applied by defensive lineman Jope Motokana, senior defensive back Zack Karels picked off a pass in the back of the end zone.  Karels had two interceptions, his first coming in the third quarter.

“We just had to execute and make sure we got the job done and that’s what the guys came to do.  That’s what we practice for,” Johnson, who also had 12 tackles, said of the defense’s effort.

Freshman running back Devante Downs led the Hawks’ offensive attack with 33 carries for 129 yards and two touchdowns.  Senior running back Griffin Rash added nine carries for 55 yards.  Rash also had nine tackles on the defensive side of the ball.

On Terrace’s third offensive possession of the game, Downs capped a 17 play, 81 yard drive with a 2-yard plunge for the end zone.  Despite the Hawks outgaining the Seagulls in total yardage, 153 to 60, the score was tied at 7-7.

With 15 seconds remaining in the third quarter, Downs took the pitch from quarterback Hunter Rook and rushed down the right sideline squeezing in for a 10-yard touchdown, putting the Hawks up 14-7.

Aside from the stellar performance from the defense, the special teams unit made life more difficult for Everett, as they did not have favorable field position.  Junior Jalen Pahinui averaged 40.2 yards per punt and senior Julian Snow averaged 55.3 yards per kickoff.  More importantly, both players have improved immensely since the beginning of the season.

The Hawks’ win gives an interesting twist to the WesCo 3A playoff race.  Mountlake Terrace must defeat Lynnwood on Thursday and needs Everett to lose to conference leader Glacier Peak in order to advance to the playoffs for the second straight year.  The Hawks shut out Lynnwood 28-0 last year.

“Hopefully, we can get a playoff run coming out of this.  We have Lynnwood next week, so hopefully we can keep the momentum going and sweep them off the field,” linebacker Mitch Haldane, who led the team with 14 tackles, said of the impact of defeating Everett.

The Hawks are feeling confident about their chances to make the playoffs again.  With every game, the Hawks continue to improve and grow together as a team.  As long as the team comes out with the same energy they had during homecoming and senior night, the chants of “Terrace Power” will be heard all around WesCo again.

“If we keep it up, I think we can beat any team in this league.  I really believe we have a lot of talent out there and a lot of hard workers. I think we got it,” Rash said.