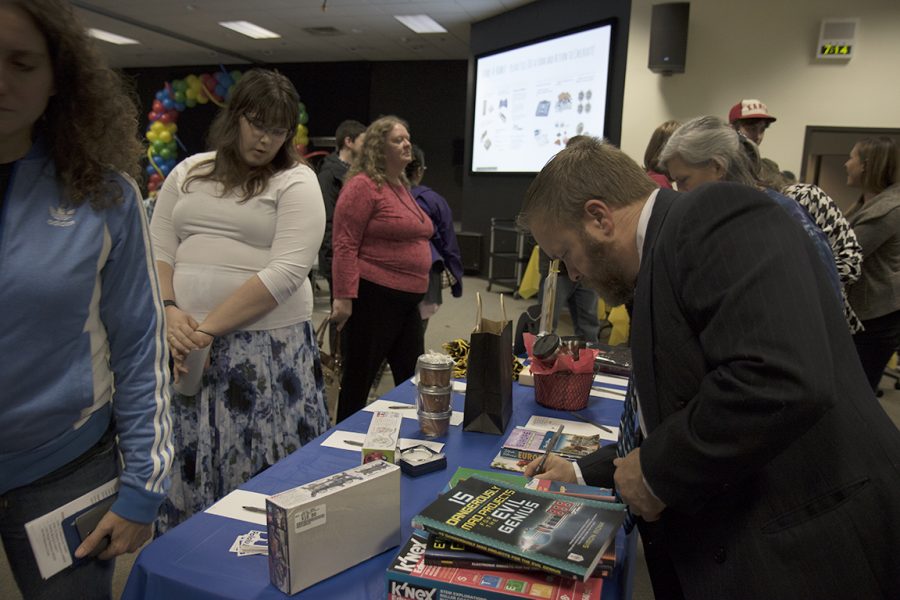 Four robotics teams and their friends and family came together at Edmonds Community College for the 10th annual Robotics Family Festival and Fundraiser on Saturday, November 5th.

The robotics teams of Edmonds Heights K-12, Mountlake Terrace High School, Lynwood High School and Edmonds Woodway High School raised a total of approximately $12,500, according to MTHS Robotics coach Crystal Edwards, who was involved in planning the event. A month or two before the occasion, people from each of the schools met to decide the venue, schedule, date and other details.

Individual teams received the money raised from individual ticket sales, which were priced at at $10 a person, or $30 for a family of five. Each team also received the proceeds from the items their school donated to the auction. All ticket sales at the door as well as the fundraiser expenses were evenly split between the schools.

The funds raised from the event go towards registration, robot parts, tools and supplies.

MTHS’ Robotics team budget is $25,000 per year, but last year the team was 3 points away from qualifying to compete in the world championship, which would have augmented the budget to $35,000.

According to Edwards, remaining funds for the budget come from grants and parent support.

Although the main goal of the night may be to raise money, there’s a room dedicated for teams to display/showcase their robots and talk about their club.

Networking and building community as well as advertising the STEM department to children were other priorities for the night.

“Overall, knowing that what we show these kids could affect their decision on whether or not to participate in robotics or engineering or anything at all, that is the best feeling. It makes all the setup and the work we do before events worth it,” said senior and MTHS Robotics treasurer Elizabeth Jurgensen.

The festival began at 6:30 when guests could begin bidding on the silent auction, meet the robotics teams and their robots, partake in robot-themed craft activities and games or revel in the dessert buffet.

“I think the whole community ought to come and see these things, [it’s] important for education and economy, I think,” Maralyn Chase, Washington State Senator of the 32nd District,  said in regards to robots and robotics.

Chase was invited to the event by her grandson, a member of the MTHS Robotics team.

All of the items in the auction were donated from companies or people involved in robotics. MTHS engineering teacher Craig DeVine donated a boat ride with lunch for up to five people.

“Students go around to businesses in the neighborhood and ask for donations,” said Jurgensen.

After the two portions of the silent auction ended, attention was brought up to the stage in the main room and student representatives spoke about the nonprofit organization, For Inspiration and Recognition of Science and Technology (FIRST). Jurgensen was the first to speak about her experience.

The students’ speeches were followed by the live auction that included a handmade storage unit that looked like a robot, and tickets to a Seattle Sounders match.

The four schools may compete against each other and other teams in the FIRST Robotics Competition in March and April, but work together as a community to fundraise and improve the robotics program as a whole.

“This robotics program across the Edmonds School District really embraces the concept of FIRST which is ‘Coopertition’: the ability to compete against each other while cooperating and working together,” said Edwards.