When students were handed their Chromebooks around the time that school started, they were also handed the only device capable of connecting to school Wi-Fi.

The school disabled access to school Wi-Fi on personal devices effective this school year, largely because the school simply did not have enough bandwidth to accommodate both school and personal devices, now that each student has their own computer.

For those who don’t know, an internet connection is like a highway with many lanes serving many cars. Each one of these cars carries a single bit – a unit of data that is either a one or a zero. Globally, this highway is very efficient, routing these cars to their destinations at top speed. However, as these cars exit, oftentimes, smaller, more suburban ‘streets’ have a difficult time accommodating them, so they slow down. Large businesses with lots of people using the internet have very large connections. MTHS has such a connection. 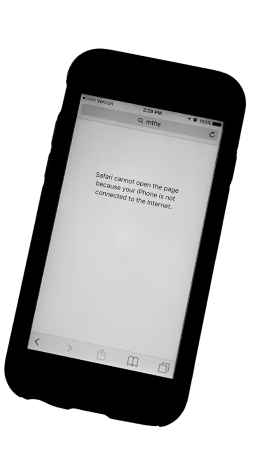 The ability of a connection to manage volumes of data is known as ‘bandwidth’. In short, it is the number of lanes the proverbial highway has, or how many cars the connection can put through to their destinations per second.

MTHS has roughly one thousand destinations. Data collected by Pew Research Center in 2013 indicates that 78 percent of teenagers ages 12-17 have cell phones.

The average webpage, according to Wired, is now approximately 2.3 megabytes. If each of the 78% of cellphone owning teenagers use their cellphones to visit three webpages per day over school Wi-Fi, then every day that students use personal devices, 5.3 gigabytes of data are routed through the school. Had students had Chromebooks, these numbers would have been even higher.

To not have enough bandwidth simply means the school’s Wi-Fi connection is not broad enough nor powerful enough to accommodate so many devices at once.

“We actually found out about this [bandwidth issue] last spring when we were doing SBA testing… We found that our network was much faster without students having access to personal devices, so we figured that we needed to make sure that teachers and students were able to get online with their Chromebooks and teacher computers,” said principal Greg Schwab. The best way to do this, he said, was to disable students access to the Wi-Fi on their personal devices.

Since the District rolled out 1:1 Chromebooks and technology has taken more of a prominent role in many curricula, the number of websites visited has grown, both educationally and not. Two thirds of students across all grades surveyed by the Hawkeye said they used their Chromebook to access social media or other non-educational websites.

Despite these figures, the potential for classroom distraction was not a priority in the decision to restrict access to school Wi-Fi.

“I’m sure people have figured out that you can have access to many of the same websites through the Chromebooks that you could with your personal device. Things like Facebook and Twitter and Instagram are accessible through your Chromebook. So, it really wasn’t that big of an issue,” Schwab said.

Already, the effects of the decision are being felt both by students and teachers.

Schwab’s PASS meets in the Hub. Before student devices were banned from school Wi-Fi, Schwab reported his computer logged on slowly while he was in the Hub for Pass, evidently as a result of having so many students in the Hub at once. “Students are logging on, and it’s blocking your access to the network. That’s my own personal experience with it. Since we’ve made this decision, I’ve been down in the Hub, and I’ve got no trouble getting onto the network.”

Unfortunately for guests to the school, this means their devices are excluded as well; however, this was deemed acceptable collateral in the decision to close the school networks. “We just can’t provide that service,” said Schwab. When the taxpayers voted to allow the District the funds to purchase Chromebooks and infrastructure, he said, they paid for educational devices, not Wi-Fi connectivity for school guests. Providing such connectivity isn’t the school’s “primary role”.

“We want to make sure the 1:1 initiative goes as well as possible, and our main concern is making sure that students, when they are in school, have the ability to log onto the network and not get kicked off of the network or experience slower-than-expected browser speed,” said Schwab.