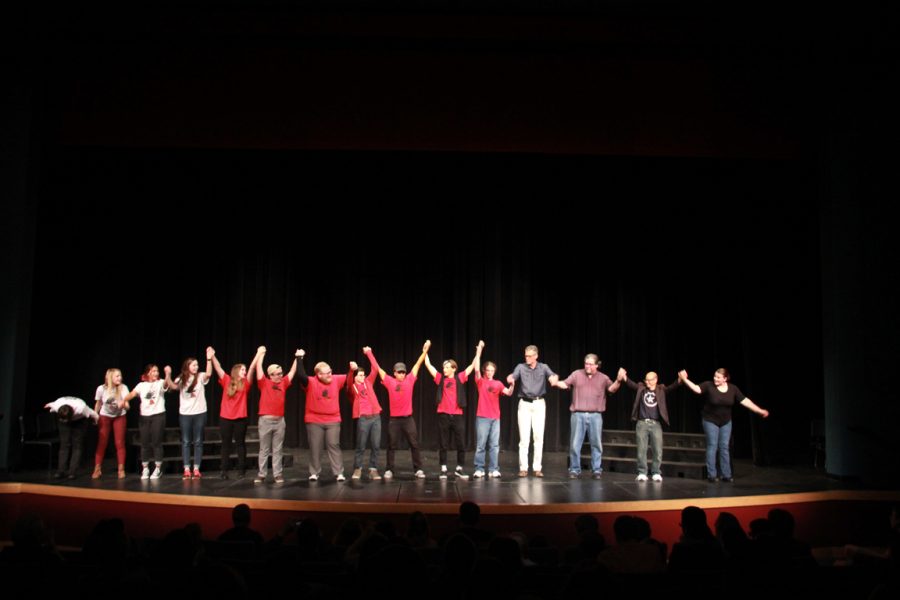 Final Bow for the team to wrap up Comedy Night

On Friday, May 6, the Drama Club hosted a improv comedy night in the MTHS Theater from 7 to approximately 8:30 pm. It was in honor of the seniors, for it was their last improvisation performance at MTHS.

The idea of this night  was adopted at  beginning of the school year. However, there was only a list of people willing to do it and no tech staff and around two weeks ago when they were finally able to start practice.

The night consisted of twelve games, including Freeze Tag, in which someone starts a scene with another person but when someone says “freeze, the people acting have to stop and wait for the freeze to tap them out and start a new scene, Sound Effects, in which a scene is determined by sound effects from the audience and Dating Game, when Collins chose to date Marilyn Monroe over Chris Pratt and a Genie.

Sophomore Abigail Apana is the hopeful next president of the Drama Club, taking over for current Drama Club president and senior Kimi Fenn.

“[Being president of the club] is a lot of pressure but I’m excited and pretty confident,” Apana said, regarding next year.

She continued, recalling a memory with the graduating seniors.

“I got really emotional. We were talking in the green room and I just started crying,” Apana laughed as she explained how she felt about the seniors leaving.

Senior Sage Cameron explained that having been on the team since his freshman year, Cameron feels torn between being sad to go and being excited to having doors open everywhere in his future.

“It’s a bittersweet feeling,” explained Cameron as he gets ready to take another big step in life. “I’m ready to step it up and go out into the community.”