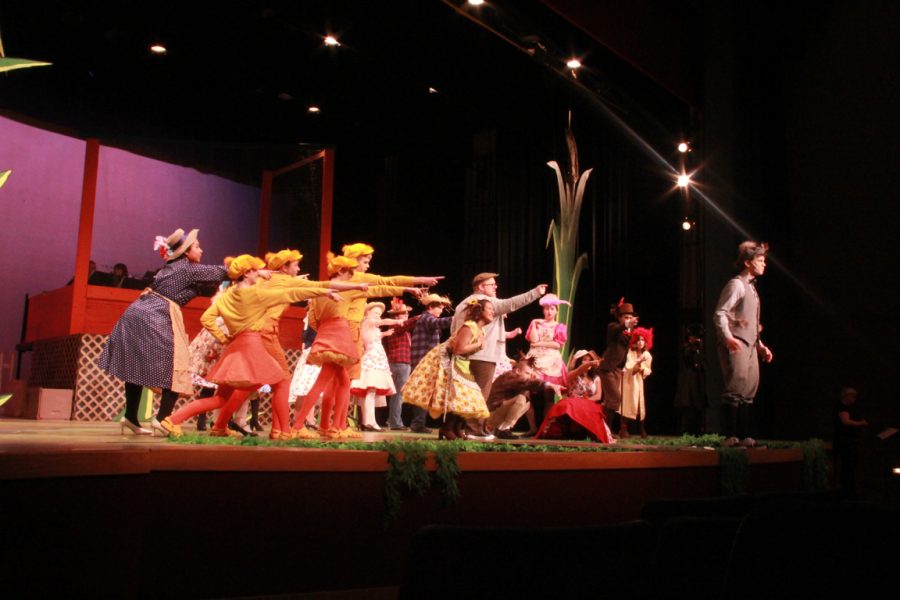 The MTHS drama department performed “HONK!” in the theater at 7 p.m. on Wednesday, Apr. 20 through Saturday, Apr. 23. The show was the first musical put on this school year and was based off the tale of the Ugly Duckling.

“HONK!” is about Ugly, played by sophomore Paul Pratt, a duck who doesn’t quite fit in with his siblings. Although the rest of his family treats him as an outcast, his mother Ida, played by sophomore Abbie Apana, encourages Ugly to remain confident and to take pride in what makes him different.

The cast gave a wonderful performance with a warm vibe and expressive singing. Many of the musical numbers were performed with smiles and welcoming choreography.

“Adults like the story of the Ugly Duckling and [we] kind of expanded on it,” Head said.

Head worked behind the scenes to bring important components of the show together, such as determining when to call the light cues and bring out props.

During the entire promotion period, the cast kept practicing because they had only seven weeks to prepare the entire musical. After a rigorous dress rehearsal earlier that Wednesday, Apana pumped up the cast with encouraging words.

“I put little napkins on top of [the performers’] mirrors and wrote a positive note and they were all duck puns,” Apana said while sending out praise to her co-actors passing by.

For the majority of the students, “HONK!” was their first musical. For sophomore Flynn Thomas, it was not only his first musical, but also his first play.

Thomas took on the role of the lead antagonist, Cat. As he had never sang in public before, Thomas “sucked it up and sang” and trained this practice with the help of a vocal coach.

“It was exciting, it was very stressful and it took a lot of time but in the end, it was worth it,” he said.

“I think it’s unique because the characters aren’t people, they’re personified animals,” Thomas said. “I feel that is very interesting because you’re not just an animal; it’s shown in the way you walk and the way that you speak.”

Drama director Jeannie Brzovic chose “HONK!” based on research with the intent of finding something different to fit the many acting styles of her drama students. She led her students step by step to first learn the music, choreography and then acting while timing the performance with the live band.

Brzovic hopes her students can “become more relaxed and confident” as they gain more experience onstage.

In addition, Apana and Thomas strive to be more in character onstage.

“There’s a really good story beneath everything,” Apana said.

In the end, the drama department’s hope was that the audience could take away a very big message — to be accepting of all different types of people.

“They learned that even if society tells you that you were born not normal or not up-to-par with everybody else, you should learn to admire life for what it is,” Thomas said. “Everybody has some meaning in them.”