Jazz 1 performs at Hot Java Cool Jazz, among other schools 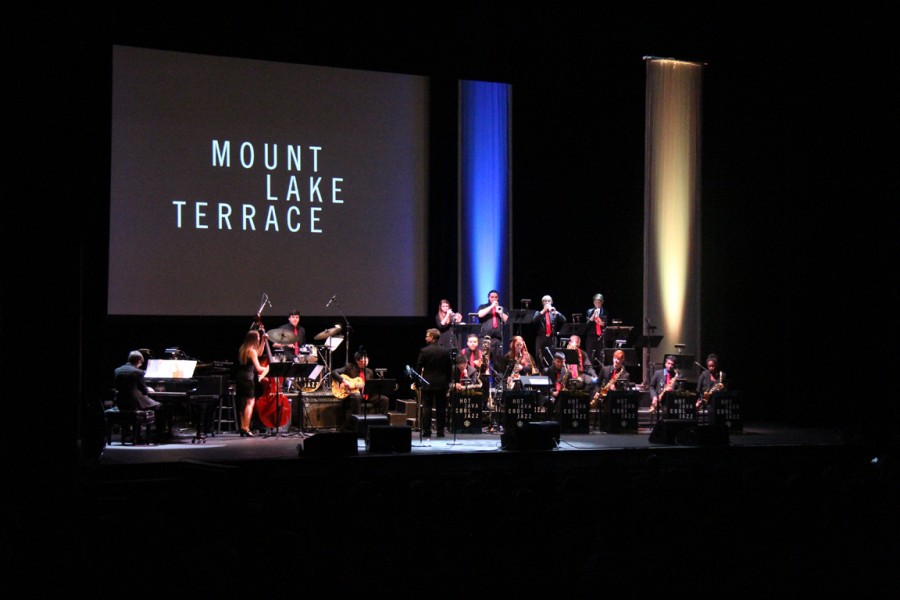 The best time for a treat like this proved to be a Friday night. MTHS’s Jazz 1, along with four other public high schools, helped host the 21st annual Hot Java Cool Jazz event at the Paramount Theater in Seattle on Mar. 25.

Mount Si, Edmonds Woodway, Garfield and Roosevelt High Schools also performed alongside MTHS to entertain a group of about 3,000 audience members. The event, sponsored by Kennelly Keys and Starbucks, sold out all the tickets and raised over $60,000 that would be donated back to the participating schools.

“When you improvise, you write a piece within a piece,” a student from the video said.

They proceeded to deliver a sharp performance that contrasted with the musical vibe of Mount Si.

An intermission was held and soon after the introductory video for Garfield was presented. Garfield opened with an amazing piano solo, and thus continued to play a spectacular selection of music.

Roosevelt performed last for the night, and awed the audience, impressing junior Dylon Rajah in the process.

“[The concert was] nothing like I ever had before,” Rajah said. “It was a totally different atmosphere.”

Senior Jun Park also felt that Hot Java Cool Java was a once in a lifetime event, even after having attended last year’s concert as well. However the difference was that last year Park played a supporting role, while this year he given some spotlight and had the opportunity to solo.

Moreover, Rajah made a few mistakes during his solo.

Nonetheless, they settled down by becoming friends with the other high schools. Amongst the band students, most know each other mutually but they also took the opportunity to get to know each other backstage, Park said.

Despite not thinking that he played his solo to the best of his ability, there isn’t anything about the concert that Park wants to change.

“Music is something that should be enjoyed and not looked upon as a mistake,” Park said.

“Sometimes it’s good to have a road map,” Park said. “I kind of had the mentality like wherever this takes me, I’ll go.”

And with that, may the MTHS band follow the road to success.