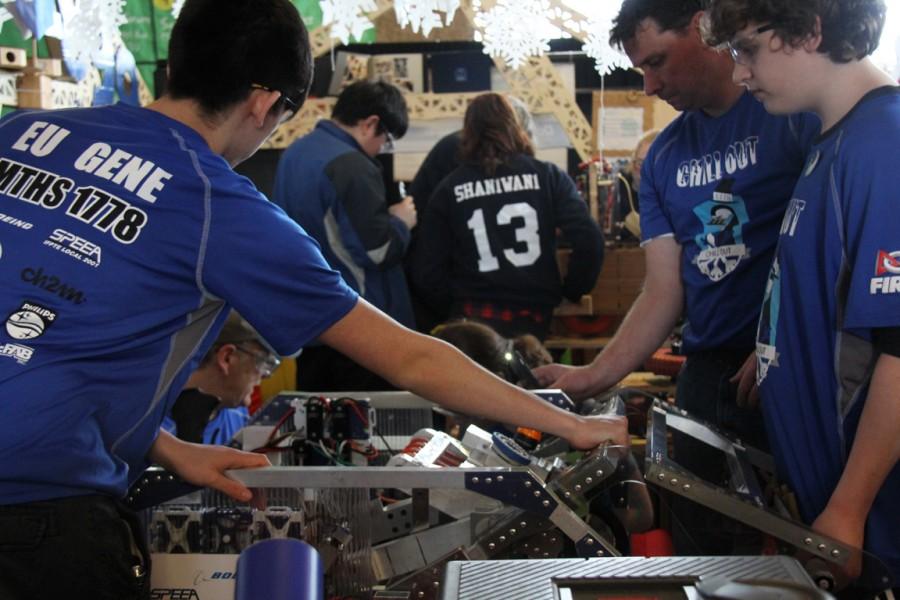 Chill Out works on the robot's C Clamp, which had been bent in the last match.

On Saturday and Sunday, the MTHS Robotics team, Chill Out, competed against multiple other Washington state robotics teams in the annual FIRST Robotics competition.

The theme of the competition was FIRST Stronghold and the game field was set up similar to a medieval setting, with game posts made to look like castles and the announcer dressed in chainmail.

Matches started at approximately 10:30 a.m. on Saturday, after opening ceremonies. Other Robotics teams along with Chill Out competed against other teams until 8 p.m. the same night.

For every match, teams would be put in “alliances” with two other teams.

After each match, the teams could take their robot to their “pit” and work on any problems or try to improve their robot before they’re called to the queue, where their robot waits for the next match.

The next day, based on scores from the previous day, Robotics teams were put into permanent alliances, which they would stay in for the rest of the day.

Chill Out made it to quarterfinals, but did not advance after losing both qualifying matches, one of which including an incident in which Chill Out’s robot was tipped on its side.

“I think [the team is] progressing at the rate they should be,” Kelting said.

Also, MTHS Robotics Treasurer Eugene Seubert said FIRST Robotics competitions are not “just about beating the other team. It’s about coming together and having the best competition you can have.”