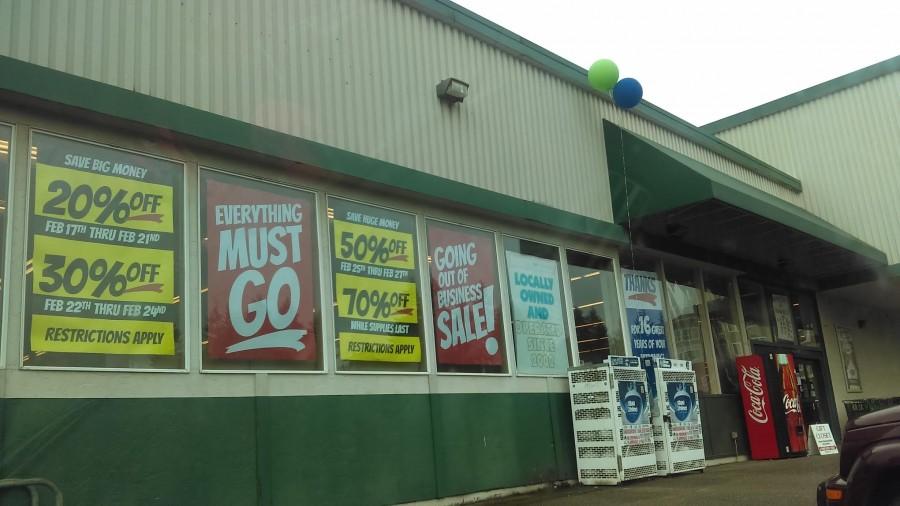 SIgns hang in the window of Rogers Market, reading "EVERYTHING MUST GO" and sales being held on the leftover items.

Walking past the nearly barren shelves of Roger’s Market Place reminds those of what it had been.

For 14 years, Roger’s has sat on the corner of 232nd street and 56th Avenue in Mountlake Terrace under the care of Roger Bottman. But with Bottman’s passing on January 21 at 75-years-old and increased competition from bulk chain stores such as Costco and WinCo Foods, the business is forced to close around the beginning of March.

Stock was cut to up to 70 percent off in last-minute efforts to sell remaining items. The displays have also been up for sale, with a cash-only sign on one designated towards the slew of other paraphernalia behind it.

A small memorial for Bottman was also set up in front of the store’s entrance, with two sheets of paper inviting individuals to write their thoughts and stories.

“Roger strived to supply his customers with good product and friendly employees for 14 years. His family and all of us here at Rogers Market would like to thank you for your loyalty and support to your local grocery store,” one read.

“I’ve been coming in this store since it was Foodland in the 50s. I’ll miss it,” he wrote.

His mention of Foodland falls back to the store’s original name when it first opened.

The future isn’t completely uncertain for the local legacy; the Main Street Revitalization Project, pushed by the city of Mountlake Terrace, includes the land Roger’s Market Place is on.

Its website described revitalization as making “the area more attractive for local shops and restaurants, other businesses, and jobs, helping the Town Center to become more lively.”

Store manager Fred Gibson is one of 18 total employees who will be leaving Roger’s upon its closing and stated that the city believes the area will be used for apartment buildings with small shops below.
As one signer put it, “MLT won’t be the same without you.”