Hawks in full control of game, surge past Eagles 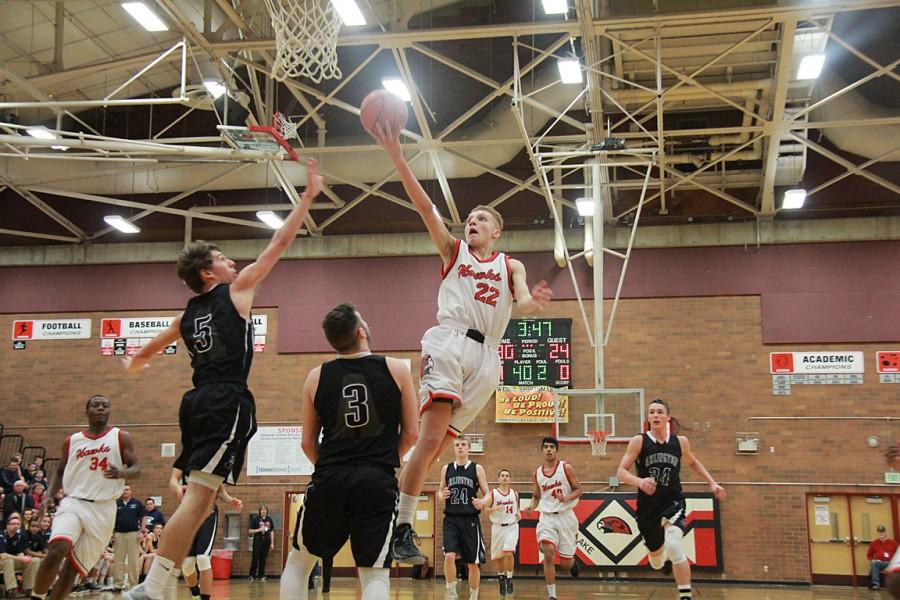 Sophomore Khyree Armstead scores off of a fastbreak with a finger-roll layup.

The Hawks controlled the pace and tempo of the game and matched all runs that the Eagles made down the stretch with runs of their own, leading them to the win, 65-48.

The Hawks and the Eagles had previously met on Dec. 15th where the Hawks were able to get a victory by 18 points, 60-42. Despite that, the Hawks weren’t going to make the mistake of underestimating a foe in the postseason.

“We’re confident in every game but this is a good team regardless of what anyone says. If they pulled any tricks out of their sleeves, we were going to fight back,” junior wing Daniel Johnson said.

For four individuals, this game was special not only because it was a postseason game. For seniors Gabe Powter, Shimron Masih, Derek Anyimah and Gabe Altenberger, this would be their last game ever where they get to play in front of the MTHS crowd at the Terraceum.

“For us four seniors, this was our last home game here,” Anyimah said. “Coming from last year not even being in the playoffs, from 6-14 to 14-6, it’s crazy.”

The Hawks and Eagles both got off to fast starts offensively with both teams making the first three field goals attempted.

The Hawks took advantage of the lack of size on Arlington’s team and dominated the offensive glass. A single play can describe how big the Hawks played: on the fourth possession, a Hawk shot a mid-range jumper but missed off the iron. Senior forward Shimron Masih grabs it, throws up a layup, misses it, then tries to tip it in but misses it once more. He is able to come out with it again and this time gets an easy look. There were three offensive rebounds in one play all from one player.

Masih finished with 11 rebounds for the game.

The second quarter was the opposite of the first, with both teams starting to buckle down on defense. Once again, the Hawks won the quarter. They were able to hold Arlington to single digit scoring for the quarter, led the game at the half 28-18.

Johnson led the way at the half with eight points on 4/5 shooting from the field, Masih right behind him with seven points.

In the third quarter, the game was dead even in terms of scoring with both teams putting up 14 points each on the board. To the disadvantage of the Eagles, that meant they were still down by 10 headed into the final quarter of play, 42-32.

It was during this quarter where the Eagles would attempt to make a run and get back into the game. The Eagles used a 2-3 pressure zone and were able to force turnovers and go on a 7-1 run to cut the deficit all the way down to just four points with still four minutes left on the clock.

The Hawks were able to show composure down the stretch and instead of being overwhelmed, they responded. The Hawks fought back with attacks in transition. The Terraceum went into complete pandemonium, signaling the beginning of the end, when Johnson sliced down the lane and pulled off a no-look wrap around pass to sophomore Khyree Armstead for the fastbreak layup.

“I was waiting for [my defender] to commit to me and as soon as he did, I dished it off to Khyree,” Johnson said. “It was beautiful.”

That forced an Arlington timeout as well as pushed the Hawks lead back up to double digits. That play had punctured all the momentum that the Eagles had previously built, and the Hawks cruised the finish line with the W, 65-48.

The Hawks face the Glacier Peak Grizzlies next on Feb. 16 at Henry M. Jackson High School after the Grizzlies defeated the Stanwood Spartans, 72-66, to advance to the district semi-finals.

“We’re going to celebrate today but once Monday comes, we’re going to get back at it. We know Glacier Peak is a good team,” Johnson said.

When Anyimah was notified of the results between the Stanwood-Glacier Peak game, he had no words but anyone could see that he was radiating with excitement for the next game.