Hawks soar past the Eagles through second half surge 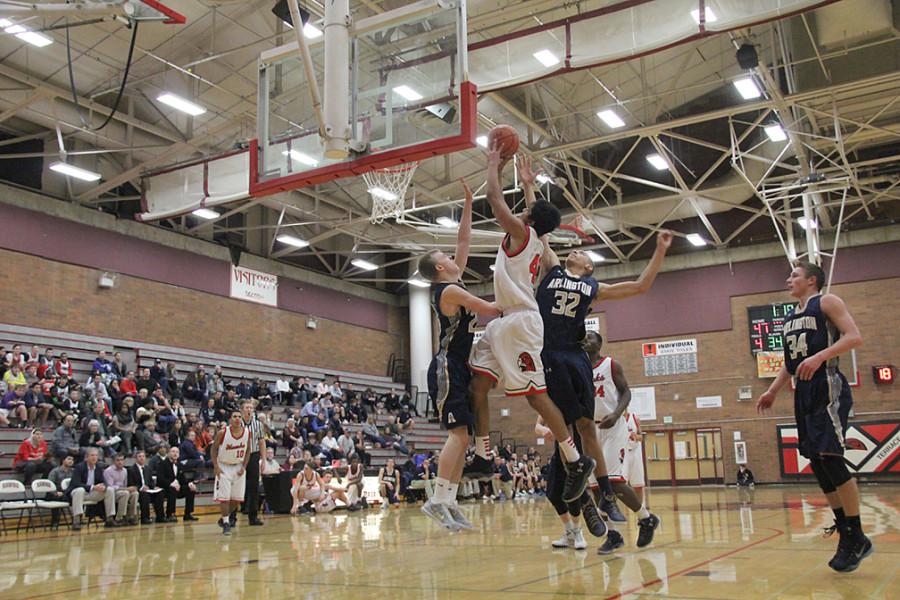 Senior Shimron Masih goes up for a lay up.

The Hawks, through their defensive crackdown, were able to break away from the Eagles and won, 60-42.

Coming into this game, the Hawks were 3-2 and had just lost a close game against Cascade where the Hawks were on a wrong end of a 16-2 run in the fourth quarter.

The game started out in tit-for-tat fashion with no team being able to hold an advantage over the other. The Hawks were able to edge out a lead at the end of the first quarter, 14-12, through the extra effort of Altenberger who got the rebound, bucket and the foul for a three-point play.

The second quarter was the definition of what the game of basketball is described to be: a game of runs. The Hawks started the quarter with an 8-3 run, leading 22-15 before the Eagles themselves would go on an 8-3 run.

The Hawks tradition of man-to-man defense began to show as the Hawks forced three turnovers in the last six Arlington possessions. The Hawks went into the locker room with a five point advantage, 31-26.

“We talked about [at halftime] how 18 of their 26 points were from the three point line and that we’d only posted up three times,” head coach Nalin Sood said. “Now, if we’re a good team, we’re going to beat people from the paint. It’s like how good football teams can run the football, good basketball teams can win games through the paint. That meant we had to get more layups and that we also had to pick up our defense and guard them a little harder.”

At the half, the Hawks’ usual suspects were the leading scorers: Anyimah had a game-high 12 points with Altenberger a triple behind with nine points.

In the third quarter, the Hawks seemed to have taken in Sood’s words because their defense suffocated the Eagles. Whereas the Eagles had six first half three pointers, they would only get one in the entire second half.

The Hawks employed a man-to-man full court press which allowed them to get turnovers and baskets in transitions. This made way for a third quarter surge where the Hawks jumped to a 20-plus lead.

“The kids did a good job on our pressure defense and that’s what we’re trying to base things off of: our offense comes from our defense,” Sood said.

“If you can have success against a good team, good program, then you can’t walk away being too disappointed,” Sood said.

The Hawks face the Edmonds-Woodway Warriors next at home tonight at 7:15 p.m. Both teams are 1-0 in the conference and this game has the potential to shake things in the Wesco South 3A conference.

“[Going into the Edmonds-Woodway game], we have the same mindset we had for every game previously, whether it was Cascade, Arlington, or Edmonds-Woodway,” Sood said. “We know what they’re going to do and we have to be enough to overcome it. They’ve got a good basketball team and we’re looking forward to the challenge.”