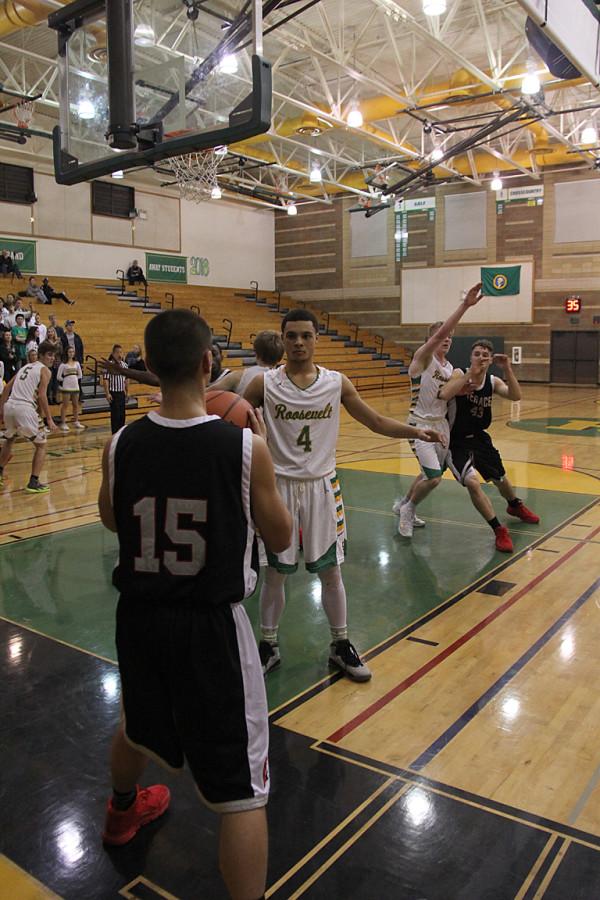 The Hawks looked to finish their four game road trip undefeated. But to do that, they would have to play against the Roosevelt Rough Riders, a team in one of the toughest leagues in all of Washington with powerhouses like Garfield High School, last year’s state champion, and Rainier Beach High School, the runner-up.

Despite nearly tripling their scoring output in the second half, the Hawks still fell to the Roosevelt Rough Riders by two points, ending the game with a score of 57-55.

The Hawks were once again set to play in enemy territory where they didn’t have the advantage of comfortability.

“When you go out on the road, you have to band together, stick with each other and stay positive because aside from a few fans in the background, it’s you against everybody else,” head coach Nalin Sood said. “We have an older team and [the four game road trip] is a good thing for us. It’s going to test us.”

Roosevelt came into this game with an even record of 1-1. Despite the Hawks having the advantage in the win-loss column, coach Sood still knew this would be a tough game.

“Tonight we have a good opponent. They run their stuff, they execute their stuff, and to be come on the road, I’ve always felt like we start six to eight points [behind]. Teams like this, night-in-and-night-out are battle tested. They don’t get to take nights off,” Sood said.

The Hawks’ game plan was no different than against any other opponent.

“Our game plan is do what we do; we want to go out there and execute our offense whether it’s man-to-man or zone defense and play the defense the certain way that we play it,” Sood said.

The first five minutes swung in favor of the Hawks who got out to a 8-5 lead with quick pace and execution. However the remaining 15 minutes of the first half became a nightmare. The Hawks only managed to put up eight points in those remaining 15 minutes, while giving up 19 points to the opposition. The Hawks trailed the Rough Riders, 24-16 at the half.

The Hawks came out of the locker room with a fire lit into them. They would score a whopping 25 points within the third quarter and take a 39-35 lead.

The fourth quarter came down to the wire, and neither team had control of the game until the momentum finally swung over to the Rough Riders’ side when they controlled a 55-53 with only 49.5 seconds left.

The Rough Riders were led by their standout player, 6’5” Jonathan Lang who scored more than half their points (35) including all of the crucial buckets down the stretch.

The Hawks came down and senior Derek Anyimah would score with the right handed hook shot off of a key offensive rebound,, bringing the Hawks within two.

After fouling, the Rough Riders stepped to the line but failed to close the door on the Hawks’ comeback hopes when they missed two crucial free throws.

With only 10 seconds left, the Hawks elected to put the ball into the hands of their three-point sniper, senior Gabe Altenberger who jabbed right, dribbled hard to the left and rose up for a three point shot to win them the game… but to no avail.

The Hawks had another chance when the Rough Riders turned the ball over off a miscommunication. This time, it was junior Joey Gardner who would heave a half-court prayer, putting all of the Hawks’ fans hopes into the shot. It bounced off the backboard and hit the front rim before bouncing back out.

The Hawks are now 3-1 but they finally get to return to the Terraceum on Saturday against the Cascade Bruins at 7:15 p.m.