Hawks dig themselves into hole and fall to the Royals 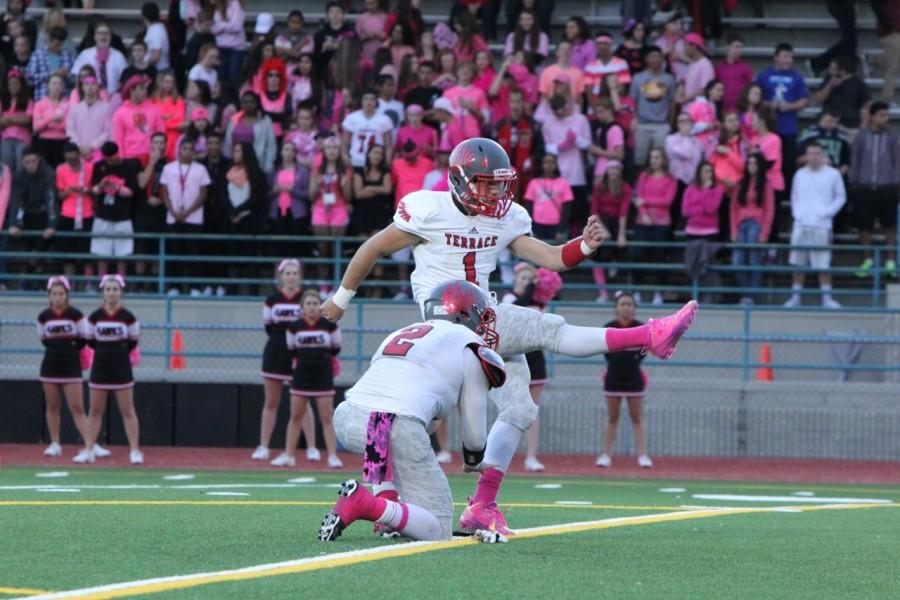 Jensen kicks the extra point after a touchdown.

The Hawks are fresh off a playoff berth and victory last year and are hungry to once again accomplish that feat and maybe even more. They faced off against their longtime rivals, the Lynnwood Royals, in a game that was all too crucial to their playoff hunt. The Hawks’ defense struggled to stop the Royals on the ground and allowed too many points on the board, which later stopped their comeback chances and thus they lost the game, 49-28.

The game started off very high scoring, but not in favor of the Hawks. The Royals scored on their first possession and then were able to pick off a pressured senior quarterback Michael Jenson and return the ball to the end zone. That would give the Royals a 14-0 lead with 5:27 still left in the first quarter.

The Hawks responded with a quick drive all, made possible through efforts of senior tailback Riley Morrin who double juked his way for a 70 yard touchdown, bringing the deficit to a one possession game.

At a crucial junction of the game, the Hawks failed to make key defensive plays down the stretch and that allowed the Royals to embark on a 14-0 run in the next 6 minutes that would make the game a daunting 28-7.

As if the game couldn’t get any worse for the Hawks, on the following drive the Royals blocked a Hawks’ field goal attempt.

The Hawks were able to stop the Royals on their next drive and then come back and respond with a touchdown, putting the deficit down to 14 and creating potential for a comeback.

Still, the defense couldn’t hold their own and gave up a score only 30 seconds of game time after the Hawks’ touchdown, making the deficit daunting once again.

The rest of the game was a blur. The Hawks’ struggles continued while the Royals surged through their run game all the way to the finish line. The Royals won the game 49-21.

The Hawks play their next game at Edmonds Stadium versus the Kingston Buccaneers at 5 p.m. where they will try to finish the regular season with a win.