Student representatives sworn in at school board meeting 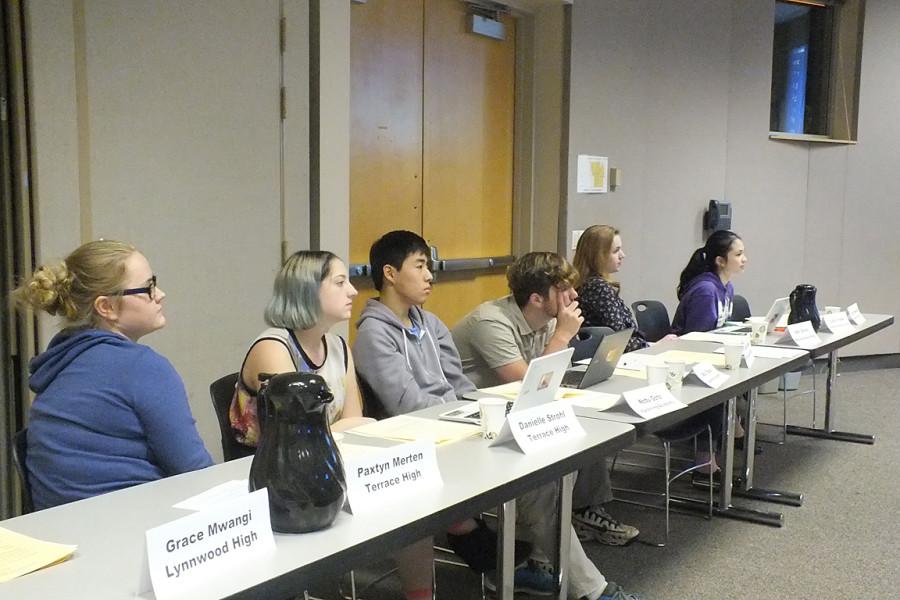 Student representatives of the Edmonds School District (ESD) school board were sworn in during the ESD school board meeting on September 28.

When the meeting began, ESD school board President Diana White gathered seven of the nine student representatives to stand in front of the American flag and recite an oath to the room. Afterward, they shook White’s hand and returned to their seat.

Members of the school board said they appreciated the student representatives joining the board and looked forward to seeing them at future meetings.

Throughout the meeting, the student representatives made comments on new business and public comments made by local residents. As the students spoke, the school board responded with their own thoughts and thanked each student afterward.

A motion was made to replace all windows and some doors in the MTHS building due to warping and dysfunctionality and the Heating, Ventilation and Air Conditioning (HVAC) system. MTHS representatives Paxtyn Merten and Dee Strohl spoke to the board, saying some of the doors in MTHS had to be “kicked extra hard” in order to shut. Merten also commented on the HVAC system and said it could be loud at times and makes it hard to focus on what teachers and other classmates are saying.

Each student made a final comment on their own individual thoughts about their first meeting. The eLearning Academy representative Max Chase expressed his opinion on the newly implemented crumb rubber turf field put in at the Edmonds Heights playfield. Chase said he doesn’t understand the problems mentioned earlier from local residents.

The meeting was closed with the eLearning Academy representative Nobu Gotu being sworn in by Diana White.

The next ESD school board will be held on October 13th at 6:30 p.m. at the ESD district offices.