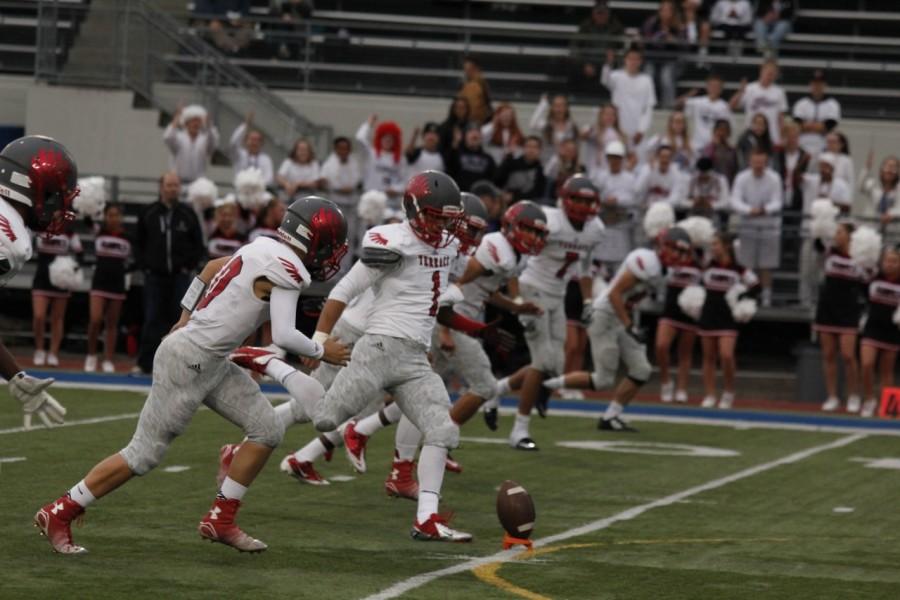 Senior Quarterback Mikey Jenson kicks the ball to start the football game against the Shorewood Thunderbirds on Friday, September 9th.

The Hawks traveled to Shoreline Stadium to play the Shorewood Thunderbirds, but it was the Hawks who would have the last laugh when they won the game, 38-24

The Hawks and the T-Birds have had their fair share of battles over the last five seasons, but the Hawks have had the best of them in recent years. Over the past five years, the Hawks are 5-0 against them. Not only that, but they’ve won by an average margin of 28 points, the greatest of which was a 42 point margin of victory.

The Hawks wanted to continue to bolster their record against Shorewood and maintain their win streak and their shared throne atop  the WESCO 3A division with Glacier Peak.

They started out strong with a heavy dose of run game, taking it straight to the teeth of the Shorewood defense. The Hawks used that strategy mixed in with an occasional over-the-top pass play in order to take an early 14-3 lead in the second quarter.

Shorewood, met with the choice of either throwing in the towel or keep battling, went with the latter option and fought back with a strong drive, capped off by a 40+ yard gain that would put them in position to score and make it only a one possession game, 17-10.

At this point, the Hawks had scored on every drive thus far and aimed to do so once again. They traveled downfield with the help of senior quarterback Michael Jenson’s 50 yard pass to junior wide receiver Daniel Johnson.Two plays later, Jenson found another wide opening and passed to senior Riley Morrin, leading him into the end zone with a 20+ yard catch and increasing the lead back up to 24-10 just before halftime.

The pace of the game slowing down immensely at the start of the second half. The T-Birds seemed to feed off of that and  scored immediately, once again decreasing the deficit to just one touchdown, 24-17.

The Hawks answered back quickly,bringing the score back up to 31-17 in less than two minutes of game time.

After stopping the T-Birds and getting ball back via punt, the Hawks looked like that victory was surely theirs for the taking.However, through a pick-six thrown by Jenson, Shorewood got back in it.

At the beginning of the fourth quarter, the Hawks started to milk the clock. Their drive took about eight minutes of game time before they finally scored another touchdown, making it 38-24 with only four minutes left in the game.

The nail was put into this game’s coffin when in the next minute, senior linebacker Tanner Munnis jumped and snatched an interception to give the possession back to the Hawks. A few runs and QB kneels later and the game’s final buzzer sounded.

The Hawks have now won three straight games this season, improving to a record of 3-0 while the T-Birds are still working toward their first win. Terrace’s record has also improved to six straight wins against Shorewood. The Hawks finished the game with three players rushing for 100+ yards: Jenson with 19 carries for 106 yards (5.6 yards per carry, also had 133 yards passing yards for two touchdowns), Morrin with nine carries for 104 yards (11 yards per carry), and senior running back Jordan Bishop with 26 carries for 156 yards (6 yards per carry).

The Hawks have only started 3-0 twice ever in school history. They will look to build onto this win streak with a victory against the  Edmonds-Woodway Warriors next Friday at the  Edmonds Stadium at 8:00 p.m.