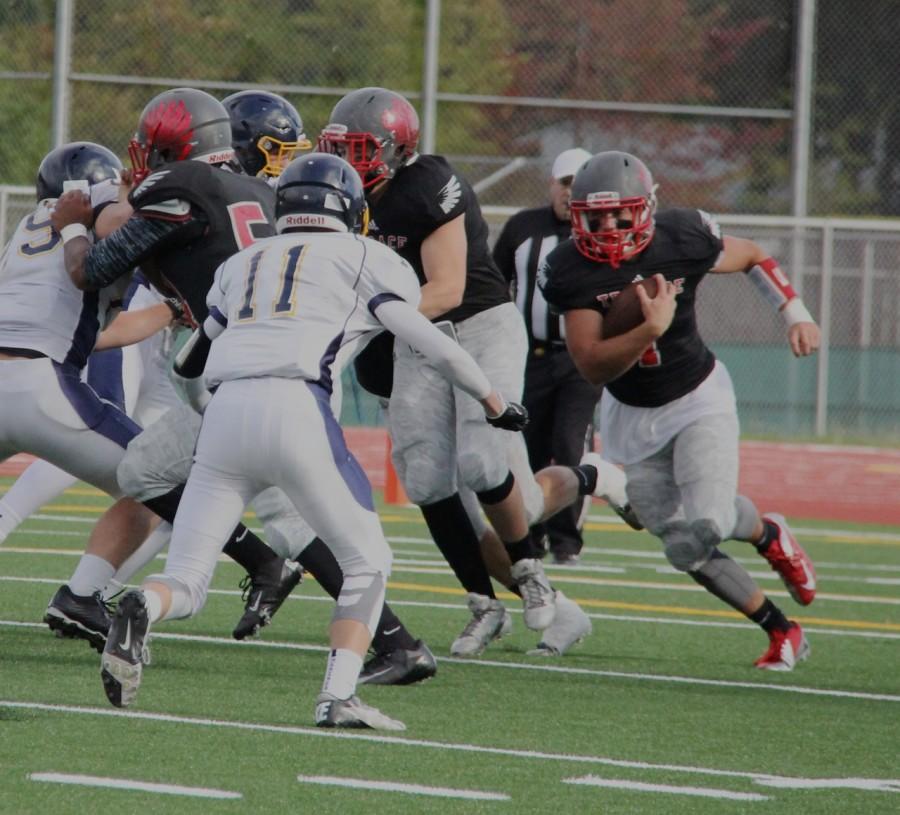 Senior quarterback Michael Jenson scrambles out of the pocket and runs for more yards.

The Hawks and the Mariner Marauders met on the gridiron at Edmonds Stadium and battled tiluntil the last minute for every last point, but the Hawks defense proved to be a little too much as they couldn’t complete their second half push and get a victory. The Hawks won, 34-31.

The game started off at a rapid pace. The Hawks’ stuck to the game plan that’s worked for them since last year: run the ball.

“[Our game plan was to] go out and punch them in the gut,” senior quarterback Michael Jenson said. “We wanted to go up the middle and get as many yards as we [could]. We know we are a hard hitting team so we just went hard at it.”

“Well honestly I felt like we had a job to do,” Bishop said. “I felt like no one could stop us so the momentum was flowing [our] way.”

After quickly getting into the red zone, Jenson threw a lob pass that perfectly landed into the jumping hands of junior wide receiver Daniel Johnson. The Hawks then surprised the Marauders with a two-point conversion.

The Hawks weren’t done with handing out surprises though; they pulled out a surprise onside kick and recover the ball. The Marauders’ defense began to sharpen and put the Hawks into a 4th and 7 situation. That didn’t deter the Hawks from going back to how they got the first touchdown. Jenson once again threw up a lob pass that floated straight into the arms of Johnson, giving the Hawks an early 14-0 lead.

The Marauders weren’t done yet however. They stayed poised and subsequently scored the next 10 points to bring the deficit to only 4 points, 14-10 Hawks.

But as the old saying goes, “if it ain’t’s not broke, don’t fix it.” That seemed to be the mindset for the Hawks as a minute before the first half drew to a close, Jenson threw up another long range bomb to Johnson who would go 48 yards and just barely miss the end zone by a single yard. The Hawks would punch it into the end zone and go into halftime up 10, with a score of 20-10.

Right after the first touchdown of the second half came a quick second one that followed a three-and-out by the Hawks. The Marauders would then take a 24-20 lead halfway through the third quarter.

“I was feeling down on the team [at that point],” Jenson said. “But I’m the quarterback and I needed to hype up the team and that’s what I did to get the victory.”

The game would then turn into a back-and-forth affair. The Hawks regained the lead, 27-24, by way of a pass to running back Morrin.

During the next drive down for the Marauders, after a pass play where a Mariner receiver caught a pass between two Hawks, junior defensive back Nick Fisher got injured during the play. There were rumors and speculations as to how bad the injury was but it was later confirmed by senior defensive end that it was an ankle dislocation.

After the injury, the Marauders would quickly score again and once again regain a lead of 31-27.

The injury to Fisher seemed to motivate the Hawks to finish the game with a victory.

“Usually when people get hurt, we play for them. That’s what we did for [Fisher]. We played for him and we pulled out the victory for him,” said Jenson.

The Hawks slowly but surely marched down the field getting into the red zone, and before you knew it, they were only six yards away from another lead change. The Marauder defense forced them into a 4th and 1 situation with possibly the game on the line, but that didn’t deter them. They went for it and benefited with a touchdown.

Now it was time to play some defense. The Hawks played stifling defense when it mattered most. The Marauders were put into a make-or-break 4th and 4 situation where all the marbles, so- to- speak, were on the line. With the game on the line, they failed to complete a pass and thus turned the ball over to the Hawks.

The Hawks would run out the clock and get their first victory of the season.

Coming off a school history making season, the Hawks had lofty expectations put onto them; expectations that many people around the league didn’t think this team could fulfill.

“Man, [this win] feels good,” Jenson said. “All the coaches around the league chose us to be close to last place so its nice to show them how we do and get that win.”

Bishop also believes that this win will be the fuel to the Hawks’ fire.

“[This win] just pushes us to go harder and harder,” Bishop said. “We [had people] ranking us [close to last] and saying that we weren’t going to be any good this year. [We’re] trying to show that we can go all the way to the top. I truly believe that.”

This win gives the Hawks a record 1-0. Their next game will once again be at Edmonds Stadium against the division rival Meadowdale Mavericks. It will be at 8:00 pm on September 11th.