Senior Danielle Hirano made her time on stage magical and memorable 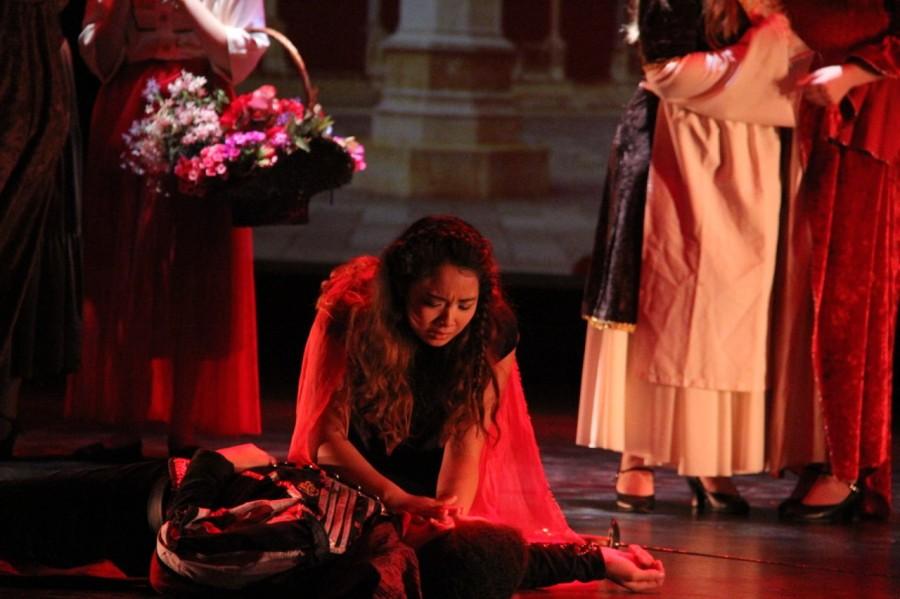 Lady Capulet played by Hirano weeps over the body of Tybalt, played by Damon Dahl.

For Danielle Hirano, drama isn’t just a play – or plays for that matter. It’s so many other things, from what you see on stage to what goes on behind the scenes.

It’s work, it’s fun and it’s a struggle to manage it all, but in the end, it’s worth it.

Hirano has been through the wringer of theatre. After four years of experience in drama, she knows what it takes to act, balance life and keep things in perspective.

“When I’m performing and I know everything’s going right, I feel great. I feel like I connect with the audience and I’m teaching them something,” Hirano said.

Not only that, but the chance to teach audiences about subjects through action on a stage, is one of the best things about theatre.

“Once [the show’s] over and you feel like you’ve put on a great performance and then you go out there and you say, ‘Hi’ to your friends, it’s the best feeling in the world because you feel like you just gave them something to think about,” Hirano said.

Hirano had little experience with drama before high school, mainly participating in community shows as a young child. But her high school career in drama all started in her freshman year, with a simple recommendation from a friend to try out, and a need for a group to call her own.

“I was like, ‘[High school] is scary, I really need  to find a group of friends,’ I needed someplace to be,” Hirano said.

After her first audition, which earned her a part in the musical “All Shook Up,” Hirano had found her place. She continued in theatre and would be in many more shows, taking both supporting and lead roles. According to Hirano, having a lead role is no small feat.

“You’re not just a lead role, you’re [in] a leadership role for all the people around you, and so you just have to show that you’re ready to put 100 percent in,” Hirano said.

Hirano’s favorite roles were as Leean in “A Piece of My Heart,” a play about the Vietnam war, and her performance as Louise in this years musical, “Gypsy,” which was one of her most notable at MTHS.

“I feel like I connect with Louise a lot, [especially about] becoming comfortable in my own skin,” Hirano said.

As is true with many different extracurricular activities, drama takes a considerable amount of time to be a part of and perfect. This was true for Hirano, as her involvement in school made it more difficult to participate in a time consuming trade such as theatre.

“It’s been really hard for me to craft my art compared to a lot of kids my age in the Seattle area who do theatre, I’m not at their level. But I have the passion and the drive to do it,” Hirano said.

Hirano is preparing to act in some plays outside of high school this summer, including “Les Miserables” with Driftwood Players in late July, which is her favorite musical by far. She won’t be a lead role, but she will be in the ensemble and will have two solo features in the production.

Hirano will be attending Whitman College next year and plans to major in political science or international relations. Eventually she plans to take up law, however that doesn’t mean theatre will be exempt from her college schedule.

“[I will] definitely have a minor or maybe double major in theatre, I don’t know, but theatre will be in my life in college,” Hirano said.

Although theatre is her passion she said it’s not the most reliable profession and she’s making sure to keep things realistic.

“If [I] plan a career in theatre I don’t know if I can pay my bills,” Hirano said with a laugh.

Drama isn’t everything, but Hirano will no doubt always enjoy the art that is theatre and acting.