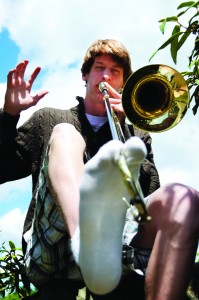 Few freshmen have the courage to make themselves known. Jesse Anderson, however, has been iconic and inspirational since the start of high school. Most people will remember him as the guy that played trombone with his foot at the Arts Assembly.

Being the incredible trombone player that he is, he will be attending Central Washington University next year to study classical and jazz music as well as psychology. As an incoming freshman Anderson strived to be a part of the nationally renowned Jazz 1. His dream of being in the group came true his sophomore year when he became the only sophomore first chair trombonist in Jazz 1 history. Not only is his musicianship outstanding but also his charm and charisma inspire all who encounter him – so much so that he was selected as the most inspirational Jazz 1 member for three consecutive years. On top of his ample talent and achievements he was invited to play in the all-star chamber group at the UW.

Of course, just like any other freshman, Jesse made mistakes in his first year. He feels that he “spent a lot of time in [his] first year, venturing down wrong paths, and [he] learned quickly from these decisions what is right from what is wrong.”

However the power of jazz helped guide his soul and illuminated his true calling. He is off with a level head and driven heart to achieve his dreams and continue his passion.