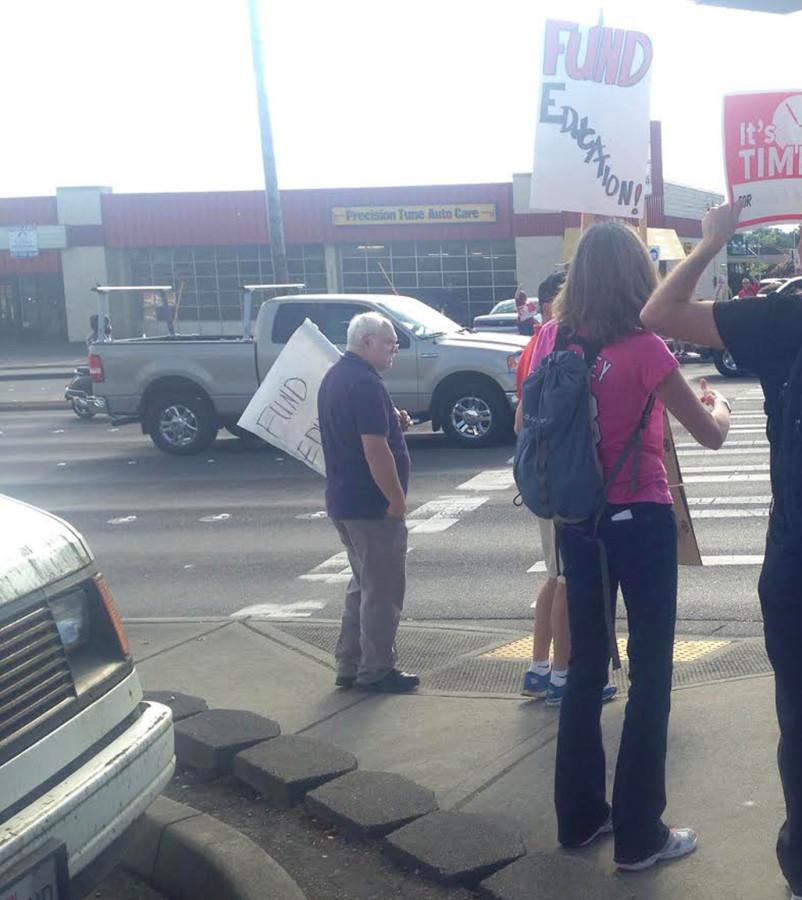 Passersby honked in support as Edmonds School District (ESD) staff stood on street corners and waved signs to protest the lack of fully funded education around the country.

The May 16 protest began at 3:30 p.m. and was held at six different locations. Most MTHS educators were stationed at 196th and 44th Ave W in Lynnwood. Teachers were located at all four corners and moved between them to protest from different spots throughout the day.

Signs were pre-printed and, in some cases, designed and created by individual teachers. Most read things such as “Students 1st!” and “It’s time to fully fund education” printed over a clock-shaped board.

Teachers believe that the protest is important because very little has been done to fix education’s inadequate budget.

“I think [this protest] is a good response to a lack of action [because it] doesn’t disrupt the school day and it gets the word out,” English teacher Jennifer Widrig-Hodges said.

Many educators said they were there for their students and other children who have a limited opportunity to learn. Lynnwood Elementary third grade teacher Diane Nelson said she came down to “fund our children’s future.”

Brier Terrace Middle School (BTMS) science, math and technology teacher James Sullivan said the protest was most definitely causing a spark and making a change for students and education.

“Every time someone sees us standing, is a conversation at dinner that night,” Sullivan said. “So, I think we’re indirectly making a change.”

As people drove by and saw the protest, many honked in support. In reaction, the teachers and educators would cheer and wave their signs. Many protesters said they loved hearing the honks and thought of it as a way to tell that they’re making a difference.

“People are very responsive,” Spruce Elementary counselor and psychologist Jodie Jones said. “I think that the community is finally seeing that we care for our students.”

Many teachers pointed out the need for smaller class sizes. The lack of funding has caused a decreased number of teachers in schools, and as a result classrooms have become more crowded.

BTMS math teacher Todd Johnston said he went to the protest because he thinks students being able to learn in a healthy setting is important and he wants the state legislatures to see what needs to be done.

“I want smaller class sizes for my [students] and a better environment for my work,” Johnston said while waving a glittery sign that read “students need fully funded education.”

Students made an appearance at the rally as well.

From the Everett School District, Heatherwood middle school eighth grader Carl Hess said he came down because both of his parents are teachers in the ESD and he thinks it is important to get the word out and show how important it is to students that education is fully funded.

“Everyone of these people drive by [and see the protest] and think about it,” Hess said.

Throughout the rally, Superintendent Nick Brossoit and Vice President of the ESD School Board Kory DeMun also handed out cookies to the protesters to show support of the cause.