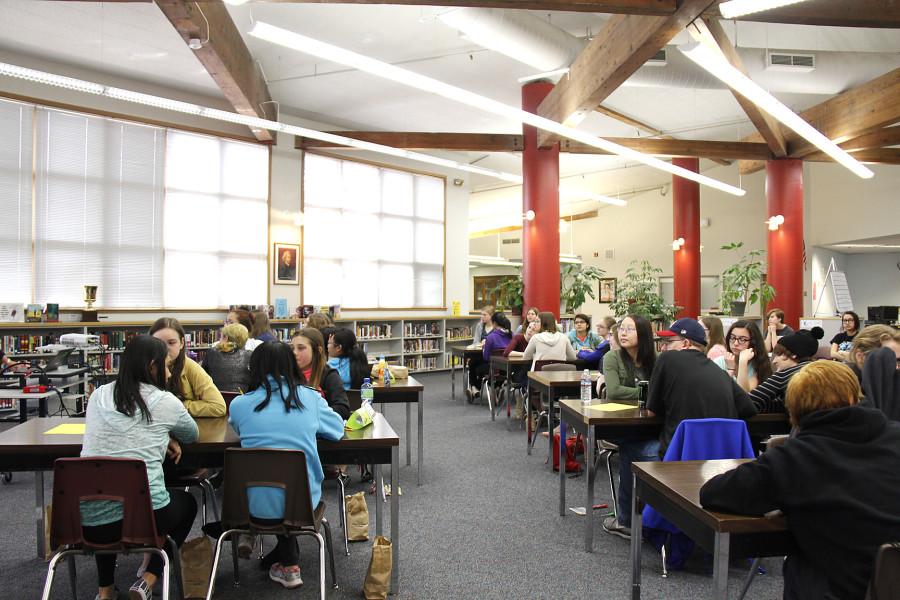 The Battle of the Books, an annual contest based on the knowledge of certain books, was held in the MTHS library on May 18 at 8 a.m.

According to MTHS librarian Kasey Meier, the Edmonds School District (ESD) librarians look at a national list of best-selling books and choose 20 to quiz students on for the Battle of the Books competition.

The competition consisted of three rounds with 15 questions each. Principals from each school stated facts about books and it was up to the competitors to correctly write the title. When the time was up for each question, judge and librarian Steve Goodwin and Dianne Borchert rang a bell to signal to move on.

The questions varied from vague to specific, some with just character descriptions and others with detailed plot points.

MTHS, Meadowdale High School (MHS) and Edmonds Woodway High School (EWHS) were represented by three teams. This was the first year EWHS and MHS participated in the Battle of the Books. Next year, Lynnwood High School and Scriber Lake High School will join the competition as well, according to Meier.

The teams all had their own original names, some incorporating the word book, such as “There’s a Snake in My Book” from MHS or “The Novelties” from MTHS.

The teams were playing for a giant trophy engraved with their team name and school. Also, members on the first and second place winning teams would receive a book provided by Mary Kay Sheeringer from the Edmonds Book Shop.

The questions varied from vague to specific, some with just character descriptions and others with detailed plot points.

When each round was over, the two judges calculated the scores which were then projected on the MTHS library screen.

Before round three began, Rautenberg spoke on how she thinks reading is important for high school students. She asked the students to raise their hand if they read more in elementary school than they do now and, when a majority of the students raised their hands, turned to the principals and said that they should be incorporating more reading into education.

“You can learn so much about life with books,” Rautenberg said. “More than you learn in biology [class].”

When the final round ended, MHS’s “There’s a Snake in My Book” won with 43 points. All three MTHS teams tied for second place.

MHS was awarded the trophy and everyone scrambled around to hold it and take a picture of it. After EWHS and MHS left to return to school, Meier held a tiebreaker for the three MTHS teams. Two out of the three teams got the same score and were both awarded second place.

Meier said she was very glad this competition was being brought to the high school level. She said it’s been happening in elementary schools for so long and finally bringing it up to high school will be beneficial to the students.

The list for next year’s Battle of the Books is already out and posted in the MTHS library.

Rautenberg informed the students that they should start reading now and, during the summer, should visit the public library.