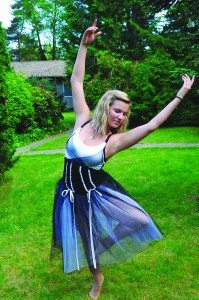 Unknown to many, Mackenzie Flood is an incredible dancer. She began dancing at the age of 4, and has been dancing ever since. Attending Barclay Shelton Dance Centre since 10th grade, she “is loving every minute of it”. Flood participates in many types of dancing, including ballet, hip-hop, jazz and lyrical. Her favorite is hip-hop, because “it’s the most upbeat and the most fun to perform for sure. I really like choreographing it too.”

Flood recognizes Brenna Donohue, her hip-hop teacher and senior project mentor, as having a hue influence on her dancing, “She really helped me grow as a dancer and choreographer. It’s really easy for me to relate to her and I really respect her as a person. I love taking her class, it’s so much fun.”

Normally a quiet person, Flood said that dance is a way to “express [her] self in a different way.” She loves performing her dances, saying “there’s nothing better than getting up on that stage and performing in front of a bunch of people.” Although she didn’t make it on the pom squad for college, Flood said that her “plan is to work hard and try again next year.” Dance, to her, is an extremely important part of life. “I may not be very experienced, or all that good at it, but it will always be a passion of mine.”

Aside from dancing, Flood has many more accomplishments. She has been the ASB Secretary for four years in a row, as well as taking multiple AP classes. Her GPA is 3.83, and she has been accepted to the University of Washington. She has worked in an after school program at Lynnwood Elementary for the past three years.