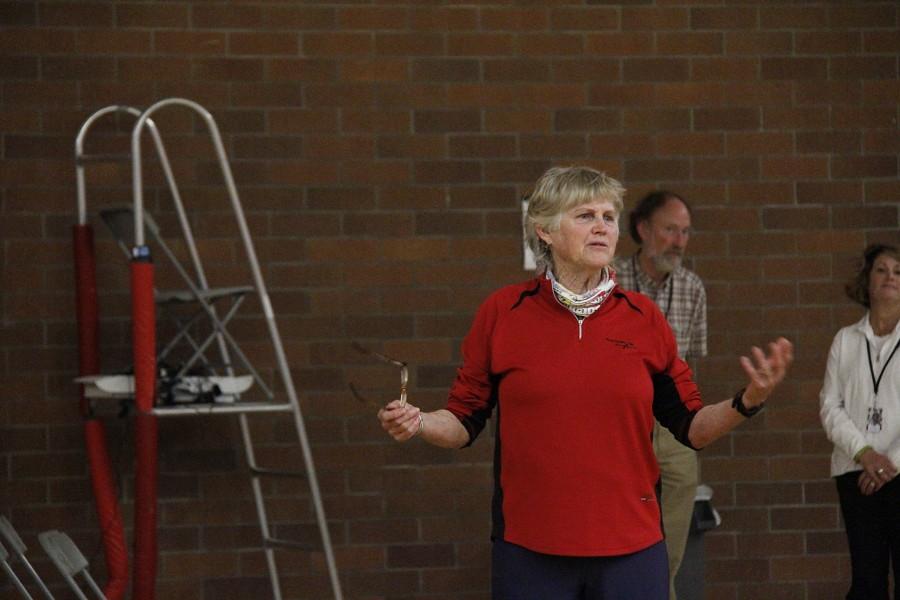 Sally Edwards shares why she thinks being healthy and fit is important to high schoolers.

After having students sprint from one end of the MTHS gym to the other, Sally Edwards of Heart Zones USA spoke to health teacher Susan Lahti’s second period on Monday, May 11 about the importance of being fit.

Heart Zones is a group training solution that offers live biofeedback for clients, members or students, according to its  website. They provide feedback to students on their fitness progress and production.

Edwards was asked to come to MTHS by Lahti to speak to her first and second period classes and bring a Smart Sensor, a band that wraps around your upper arm and records your heart rate on a screen. She called the sensors “state-of-the-art P.E. technology” and said combining technology and physical education is important for the growth of the students.

During Lahti’s second period, Lahti had her students wear the Smart Sensor and do multiple exercises in order to get their heart rate up. There are five levels shown on the screen: blue, green, yellow, orange and red. Blue being resting heart rate and red being maximum heart rate.

Lahti told her class that the goal when exercising was to reach at least a yellow level, or a heart rate of 150 beats per minute (BPM).

The grade is then based on whether if they reached that goal, Edwards said. Students who achieved a heart rate of 150 BPM would get full points for the day, while students who did not would get a lower grade.

The students then played games that involved moving around and running back and forth from one end point to another.

Because they’re looking up at their heart rate and continually trying to raise it, they’re becoming more engaged and end up doing more, Edwards said.

She said that’s her goal, to have students do more and become healthier.

“I’m on this planet to teach fitness,” Edwards said. “To teach motivation and engagement [in P.E. classes].”

According to Edwards, MTHS was the first high school in Washington that she has been to. The Heart Zones headquarters is located in California.

Edwards called Lahti an innovator because she’s “always thinking of new ways to improve P.E. classes.” She also said MTHS is doing well with keeping their students fit and in shape.