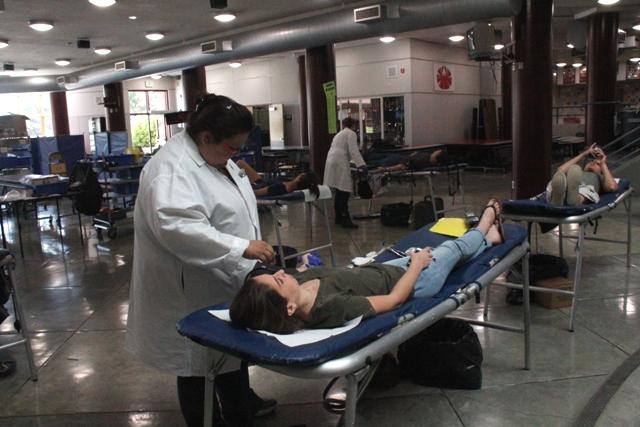 Senior Kelly Herbig donates blood at the May 9 blood drive in the MTHS HUB.

May said he was nervous at first, because only 39 people signed up for an appointment to have their blood drawn and his goal was 50. However, he said there was an an “awesome turnout” the day of the event, and the many unscheduled walk-ins helped him to reach his goal.

After the blood was drawn, it was to be sent to a local donation clinic, Bloodworks Northwest, which also provided the nurses, the equipment and the food that was made available in order to stabilize the donors. Bloodworks Northwest is a nonprofit organization which collects, tests and distributes donated blood for medical transfusions and research, according to its website.

May said his job was to find donors, reserve the HUB and ensure that everything ran smoothly.

He has been seriously planning the blood drive since February, but has had the idea to do a blood drive as his Eagle Scout project since August.

Every member of his Boy Scout troop must organize a project that benefits the community in order to advance to Eagle Scout status. May said he chose a blood drive because he thought it would benefit the overall city. He said this was because the blood goes to saving lives, which can create a bigger impact than a conventional project, such as restoring a local park.

“[I think this blood drive] will actually help the community in a broader sense. A blood drive seemed more appropriate than anything else,” May said.

May has been a scout since he was 6-years-old. He said it has taught him a lot about life and responsibility.

“[Being in Boy Scouts] has taught me a lot about leadership and how to deal with younger kids,” May said.

The past couple of months have been stressful, though, May said. With balancing both his school life and his goal to become an Eagle Scout, May said he’s “burning out.”

However, May was pleased with the turnout. He said he’s happy with his classmates who helped him get the word out and those who donated.