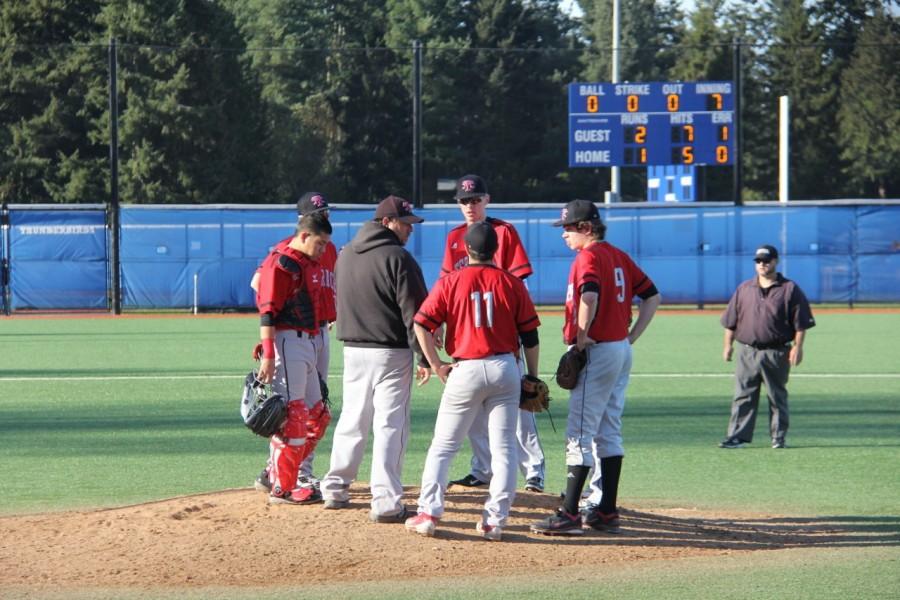 After losing the previous game against them at home, the Hawks wanted to come out strong and end the T-Birds’ winning streak.

“[We] need to limit out defensive mistakes,” senior Jaden Yackley said. “If we had a perfect first inning [yesterday], we would’ve won that game.”

The game started out with the Hawks striking first. Senior Ben Reijonen sneaking his way through the bases all the way to home plate to put the Hawks up, 1-0 at the top of the second inning.

Though they were down, it didn’t take the T-Birds long before they were able to strike back and tie the game up in the next inning.

Extra emphasis was put on Defense for the Hawks, but both teams would display stout and aware defenses. After the score in the third inning, it wasn’t until the sixth inning that anyone scored. Fortunately for the Hawks, it was one of them who was able to break that cold streak.

At the top of the sixth inning, senior Zayn Phillips was able to send a double flying into the outfield and consequently send Reijonen home, putting the Hawks back up by one.

As the final inning in regulation approached, the Hawks wanted to add some cushion to their score. However, the Shorewood T-Birds, led by their star pitcher, stopped the Hawks which gave the T-Birds’ offense a chance to maintain their undefeated record.

Junior Spencer Jacobs, with bases loaded, was able to hit a single and send a teammate home to tie up the game at two apiece.

The game took a turn for the controversial when the next Shorewood player was able to hit a single, but as the ball was in the air, the Shorewood player that was on second base was accused of leaving the base too early.Nonetheless, the umpire didn’t make a call and the Shorewood Thunderbirds were able to pull out a win over the now 6-8 overall Hawks.

The Hawks play their next game back at home against the Thunderbirds at 4 p.m. on Friday, April 17th. This will be the last game in their three game regular season series against Shorewood.