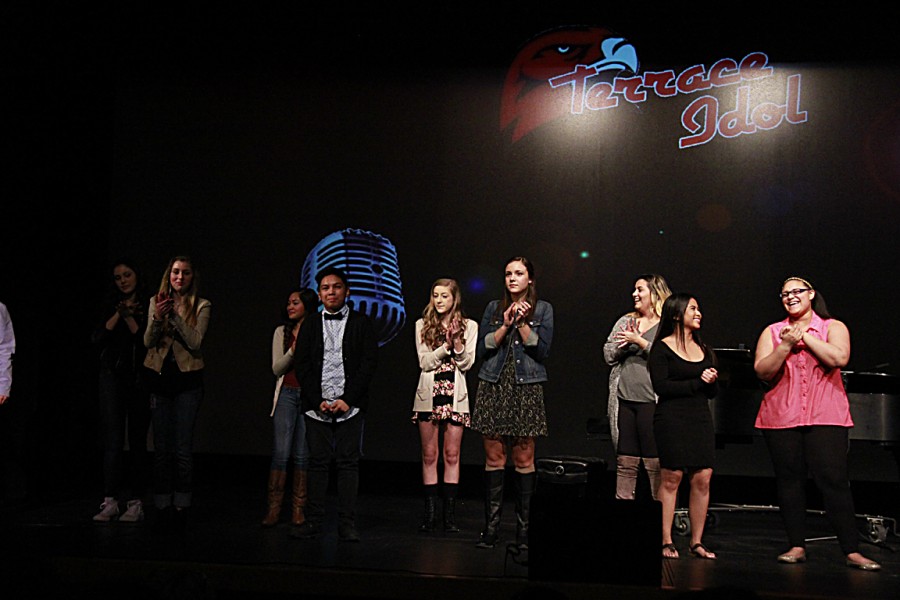 The Terrace Idol Finalists get selected.

With only nine contestants left, Terrace Idol picked up where it left off this past Thursday, Feb. 19 at 7 p.m. in the MTHS theater. The night was shorter than the first round, but full of quality talent. Five advanced to the final round.

The judges this time around were Mary Boxley, a 2011 MTHS alumnae who was involved in many choirs while at MTHS. Meg Stecker-Thorsen, who has a big opera presence in the United States, and Susan Dolacky, who got her Master of Music degree in Vocal performance at the University of Southern California.

Once again, Gene An and Morgan Arbuckle were back to entertain the crowd between singers with their own short comedy bits.

The contest started off with Auryana Ashoori from LHS, who sang a mix of Britney Spears songs this time around, including “Hit Me Baby One More Time” and “Oops I Did It Again” while again using her acoustic guitar. Unfortunately, Ashoori would not be able to attend the third round if she were to get through, and in fact did not.

The first to get through to round three was Mckenna Sessions from LHS. She sang “Jesus Take the Wheel” and showcased her great voice, which the judges were impressed by, but remarked more breath could be used.

The next to make the cut was Rodney Ocfemia from EWHS, the only guy left in the contest. He performed his rendition of “Rude” while playing acoustic guitar, and accompanied by his friend playing the box drum, adding another element to the song. There were points in the song where the drum and/or guitar would cut out and allow for isolated pieces of Ocfemia’s soft voice to shine through.

Aliya Marulita from EWHS changed up her performance drastically from the first round, but to very good effect, enough so to make it through. This round she opted for singing a slower song while playing piano. The song was “My Immortal” and came off in a very beautiful manner.

Alisha Clingan from MTHS followed up with an extremely soulful performance of “Bridge Over Troubled Water” and “Lean On Me” which got the crowd involved really well, with everyone clapping along in rhythm. The performance was composed and got Clingan through to the next round.

The last contestant to make the cut was Makeala Eddings from LHS. She was easily the best received by the judges last round, and impressed again this round, gathering many cheers from the crowd after singing “Valerie” in a confident demeanor. She had a very strong voice, and one of the only criticisms was that she almost overdoes it at times.

The other contestants sang well and tried hard, including Rachel Larson, Angel Garcia, and Maddy Caiola, the latter two having very big fanbases in the theater.

While the judges contemplated and decided who was to get through, the MTHS Theatre Sports team entertained the crowd with two separate skits, those being late for work, and growing and shrinking.

The last round of Terrace Idol where the winner will be crowned is on Thursday, Feb. 26 at 7 p.m. in the theater. Tickets are $5.