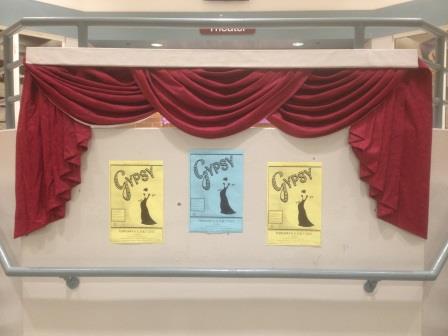 The musical play, “Gypsy,” put on by the Drama Department, is set to premiere at 7 p.m. tonight. The musical will also be showing Thursday through Saturday. The third production of the year, this musical is sure to be big, involving a tap dancing cow and burlesque dancers.

Preparation for the play has been on track for a while now, ever since their last production, “the Importance of Being Earnest.”

“It’s been frustrating at times, [but] it’s really starting to come together,” senior Emily Davidson said. Davidson plays the role of Dainty June.

The play covers the true story of Gypsy Rose Lee, a daughter whose mother is raising her and her sister, Dainty June, to have careers in the show business. The mother, Rose, is pushing both her children to perform, but the contrast between the two daughters is obvious. Dainty June is more talented and outgoing, while the other sister is shy.

“Gypsy” is known as one of the best american musicals and is a big undertaking for the Drama Department. Chamber Winds will also be assisting with the music provided for the musical. It is sure to be an exuberant and glistening musical.

“The costumes and scenery are a lot different, [being] brighter and flashier,” junior Kathleen Cram said. Kram will be playing the role of Marjorie May.

Tickets are $10 for general admission, and $8 for students with an ASB card, senior citizens, and children.