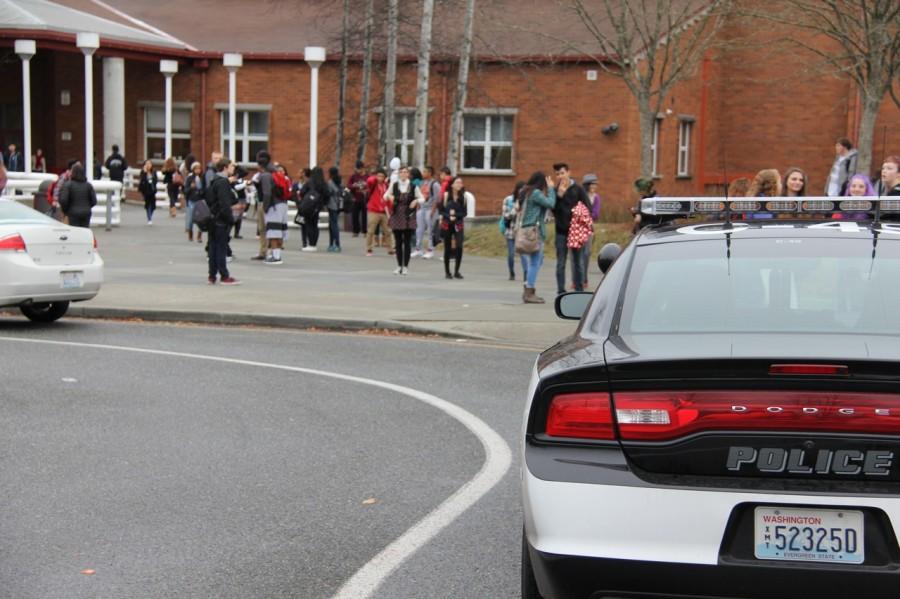 A total of six police officers responded after two bomb threats were called in to MTHS on Dec. 4.

By Nick Fiorillo and Stephi Smith

An MTHS student was arrested earlier today in connection to bomb threats phoned in to the attendance office on Dec. 4, according to Principal Greg Schwab.

Mountlake Terrace Police Department (MLTPD) detectives arrested the student, who is a minor, in the main office, Schwab confirmed. Schwab also indicated that the bomb threats are considered class B felonies in Washington and that charges are almost certain to be filed.

Police and school officials are not releasing the student’s name.

The student was released to his parents following his arrest, Schwab said.

On Dec. 4, two phone calls were made to MTHS at 1:26 p.m. The caller said the school was going to blow up in six minutes, forcing an evacuation of the building as well as a police response, according to assistant principal Peter Schurke. Police did not find any suspicious devices when searching the building, Deputy Chief of Police Pete Caw told the Hawkeye.

Schwab said the calls were made using a blocked number. But after the MLTPD obtained a warrant for the caller’s number, detectives were able to trace the number back to the student’s cell phone, Schwab said.

Edmonds School District spokesperson DJ Jakala said this afternoon the district would be releasing a statement to families tomorrow and said that the message will include a reminder about the Safe Schools Tip Line. Jakala stressed the importance for people to “step up” and call the line if they have information regarding threats to school safety.

The Hawkeye will continue to bring you updates as they are made available. Follow @MTHSHawkeye for the breaking news.

Editor’s Note: Information about the Edmonds School District’s Safe Schools Tip Line can be found here. The phone number is (425) 431-7010