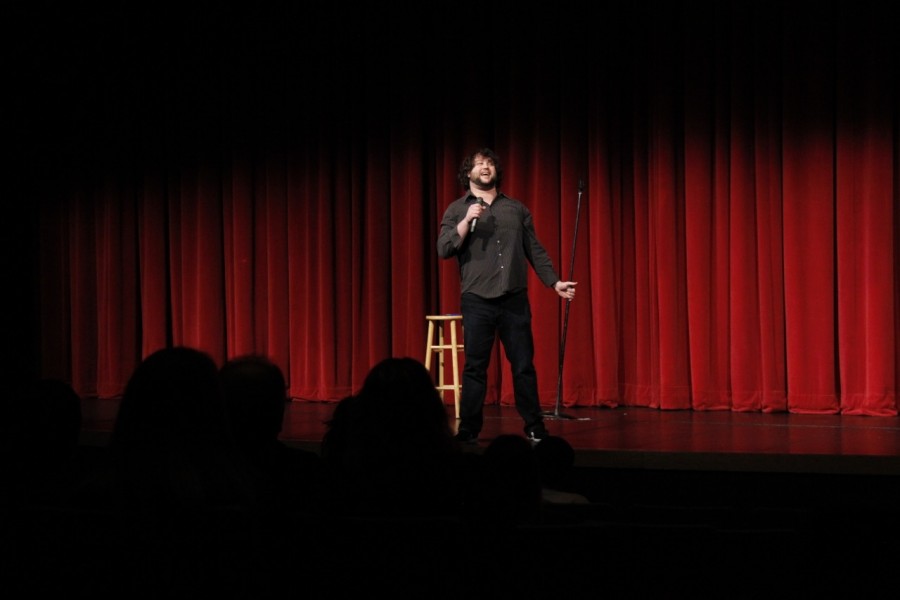 Coletta makes the audience laugh with his enthusiastic jokes.

With a howling crowd and yet a greater purpose, the “Laugh Out Loud” comedy event in the theater Thursday, Jan. 8 at 7:30 p.m. was a success. All the proceeds from the night are to go towards helping Senior Michael Hunt’s family pay his medical bills, as he suffered a serious injury in the first football game of the season.

“It means a lot, I realized that there was a lot more people that knew who I was, that were there to support me no matter what,” Hunt said.

Hunt has since recovered from fracturing his leg in 4 places and is close to being back to 100 percent.

The idea of a comedy event as charity for Hunt was suggested by the main comedian of the night, Kermet Apio, who has known Hunt and his family for a long time and was looking for a way to help.

The comedy night has even been a bit of a surprise for Hunt.

“I didn’t even know this was happening until like a week ago,” Hunt said.

The show consisted of three different stand up comedians, all in rapid succession after being introduced by Steve Willets.

The first on stage was Robert Pidde. He was invited by Apio as the two have worked together and did a very solid job opening.

“This was my first time doing a theater show so it was very different from a comedy club, [there] wasn’t like a bachelorette party on my left or an alcoholic on my right, so it was very pleasant!” Pidde said.

Pidde got into comedy at Central Washington University while working on his philosophy major, and has wanted to do stand up comedy ever since. He comes across as an awkward guy who’s had his share of strange stories.

“I never really think about trying to be awkward, I’m just a weird dude,” Pidde said.

The second to perform was Mike Coletta. His comedic style was very boisterous and energetic, while putting in many self deprecating jokes, especially anything to do with his weight, food or the gym. Coletta’s very active comedy was received well by the crowd.

The third and final to go on stage was Apio, who stayed up there entertaining for the better part of an hour. Apio was raised in Hawaii and later moved here. He got into stand up while working for United Airlines after college, where he met a guy who did some assortments of comedy and ended up trying it out at an open mic session.

Apio has a family friendly humor that jokes about everything from getting older (particularly into his 40s) to his name being very close to that of a certain frog popular in America.

Apio was probably the best received of the night, cracking certain jokes that had the whole theater rolling.

Even after the show, Apio was selling his stand up comedy CD’s and autographing them with all the proceeds from those sales contributing to Hunt.

All in all it was a great charity event that produced good vibes and many laughs.

“The support that he has here is amazing, it really says a lot about not just the team, but the school and the community here at the high school,” Apio said.