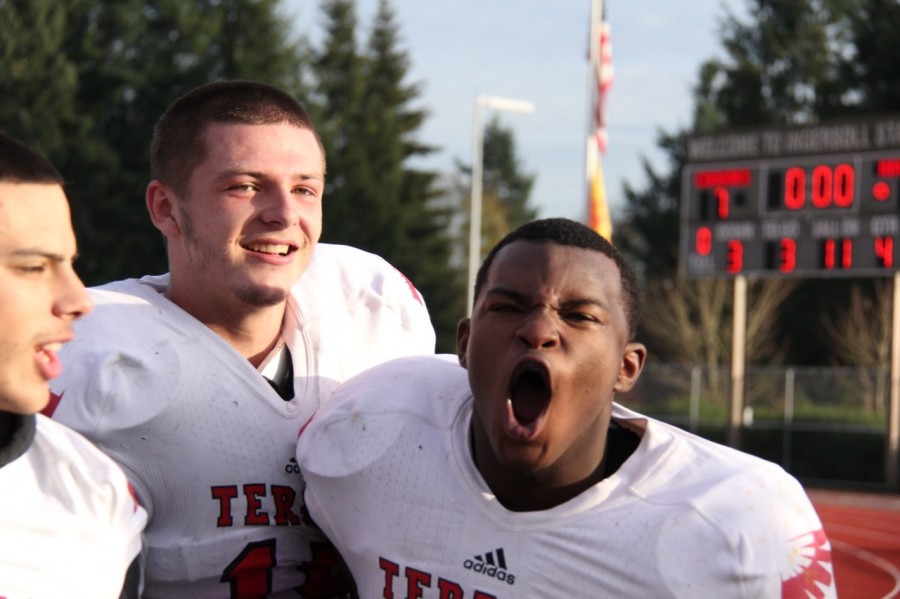 Malcolm Johnson is pumped after the first playoff win in MTHS history.

The Hawks (7-2) clashed with the Capital Cougars (7-2) at Ingersoll Stadium on Saturday, and while most of the game resulted in a defensive stalemate, the Hawks came out on top, 14-7.

The Hawks, prior to this game, had recently journeyed down to Oak Harbor and faced off against the Wildcats last week and ended up losing by a big margin while the Cougars have been on a hot streak. They had won six straight games up until this game. This didn’t deter the Hawks one bit however.

“We didn’t do a whole lot different this week at practice,” said head coach Tony Umayum. “We just know we had a good week of preparation and we’re playing another tough opponent so they’re definitely going to get our best shot.”

The Hawks started the game with huge plays. After being put into a 3rd and 10 situation, senior quarterback Justin Hopkins was able to connect on 60 yard deep bomb with senior wide receiver Gabe Brady. That play put them only 6 yards shy of the end zone, which senior running-back Ryan LaCasse would then punch in for a touchdown on the next play, giving them a lead of 7-0. The Hawks score in less than two minutes.

The Cougars respond later with a forced fumble on the Hawks’ 12 yard line, and subsequently running the ball in for a touchdown to tie up the game 7-7.

This game in the first quarter looked like it would turn into a offensive shootout between the two teams, but for the rest of the game, it became the exact opposite.

“Really I think that this game is going to be won in the trenches,” Umayum said prior to the game. “It’s going to be the offensive and defensive linemen that will decide the outcome of this game.”

For the rest of the first half, this game was all defense. There were multiple fourth down situations which would force punts from both teams. It was thanks to the efforts of the Hawks’ Austin Bates who made sure to make it as difficult as possible for the Cougars to drive down field with his long punts, the greatest of which was one that landed on the fourth yard line.

The Hawks during this game had a big help from the notorious Rowdy Rooters. Their energy and noise was enough to disrupt the Cougars play calling and force key false start penalties.

The second half was about the same as the second quarter; all defense. The Hawks finally near the end of the third quarter, broke through the Cougars defense via a big run by LaCasse. This touchdown would eventually prove to be the game-winning touchdown. LaCasse finished the game with 16 carries for 97 yards, averaging 6.1 yards per carry, and had two touchdowns.

The fourth quarter was the beginning of the end for the Cougars. After the Cougars get themselves in a fourth and inches situation, the Hawks were able to stuff them and get the ball back. From then, the Hawks showed their composure and got multiple first downs so that they could successfully milk the clock.

This wasn’t just a normal win for the Hawks; this playoff victory was the first playoff victory in the history of Terrace football. We have had four playoff trips in school history and this was the only one where we were able to win the game.

“This is just an awesome accomplishment for a team that’s worked as hard as this,” said Umayum.

With this game in the record books, the Hawks advance in the playoffs and will face the Marysville Pilchuck Tomahawks next.