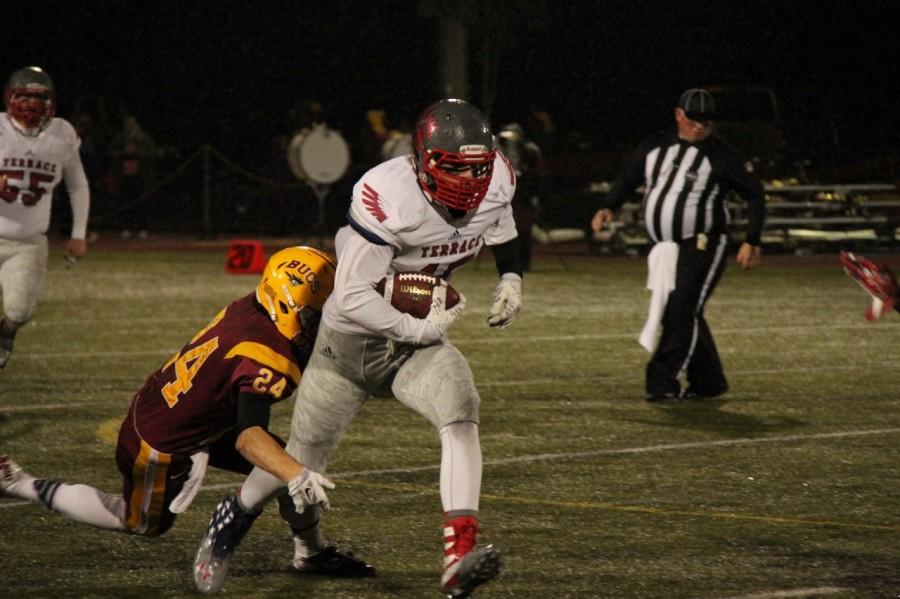 Just last season, the Hawks football team finished with an average 5-5 record. Fast forward one season and the Hawks sit at a spectacular 7-1, behind only the 7-1 Meadowdale Mavericks in the Wesco 3A South standings. Only Meadowdale and Lake Stevens share the same record with the Hawks out of the entire Wesco Football conference.

Not only have the Hawks impressed everyone with such a great season, but they’ve made history in the process. The last time the Hawks football team finished with such a record was 1971, where they finished 7-2 on the season. In the past decade, the best record the Hawks have had was 6-4 in 2010.

During this great 2014 season, the Hawks have shined, especially offensively. Senior Quarterback Justin Hopkins has thrown for 541 yards, placing sixth among his fellow 3A South quarterbacks.

The backfield duo of  seniors Ryan LaCasse and Malcolm Johnson have ravaged opposing defenses all season, leading the Hawks to their 7-1 record.

LaCasse has run for 820 yards on 80 attempts, averaging ten yards per carry. He has also racked up 15 touchdowns along the way, placed behind only Meadowdale’s starting running back Rory Spillum in total yards/touchdowns.

Before moving to Mountlake Terrace, Johnson played for the Berkner High School Rams in Richardson, TX. In his sophomore year with the Rams, Johnson put up 158 yards and three touchdowns.

Now, in his second and final season with the Hawks, Johnson has drastically improved to 669 rushing yards and ten touchdowns, ranking third in rushing yards among the 3A South running backs.

Aside from  the amazing offensive play, the Hawks have had some outstanding finishes throughout the season.

In their fourth game of the season against Edmonds-Woodway, the Hawks came out with a huge 35-28 upset. In the last seconds of the game, Hopkins threw to LaCasse for a 67 yard touchdown, winning the game.

“[The Edmonds-Woodway] game was huge. This was our ticket to the playoffs,” Hopkins said.

It sure did give the Hawks’ some momentum. They currently hold a six game win streak, losing only game.

The only game that can top such an amazing finish was the Hawks’ 33-32 win against the Glacier Peak Grizzlies. Trailing by 22 points at the half, the Hawks stormed back to pull of a single point win in which they clinched a playoff berth.

With a little under three minutes left in the game, the Hawks faced a six point deficit. After the defense stepped up and forced Glacier Peak to a quick three-and-out, it was time for the Hawks to return the punt.

“The referee was telling me to wave my hand and fair-catch the ball, and I told him that I actually wasn’t going to do that,” Morrin said. “I can’t do that. I have to return it, and that’s exactly what I did.”

The rest is in the Hawks’ history books. With the help of some amazing blocking by his special-teams teammates, Morrin was able to return the punt for a highlight reel finish. He ran 94 yards for a touchdown, in what eventually became the winning play of the entire football game.

“That was an okay play that turned into a great play . . . [Morrin] is one of the hardest working people at practice. That’s how I knew he was going to return it,” Johnson said.

“Specifically halftime, I went in there and looked every one of them in the eyes and told them that this is what we worked for. . . This is what we put our pads on every Friday night to do. Don’t quit, don’t put your head down. We’re either going to do something or we’re going to lay down, and what did you see out there? We did something,” Johnson said after Glacier Peak game.

With one more game left before the playoffs, the Hawks could go an outstanding 8-1 and make Mountlake Terrace High School history. In the history of the entire program, the football team has never done better than 7-2.

In a Halloween night showdown, the Hawks will travel to Oak Harbor where they’ll take on the 5-2 Wildcats. Of the losses, one is due to a voluntary forfeit to Marysville-Pilchuck.

Will the Hawks get their eighth win of the season, breaking a school record last set in 1971? Or will they fall to 7-2, tieing the 1969 and 1971 teams for the best school record? Find out Friday, October 31st, in Oak Harbor, where the Wildcats will host the Hawks for a 7 p.m. game.