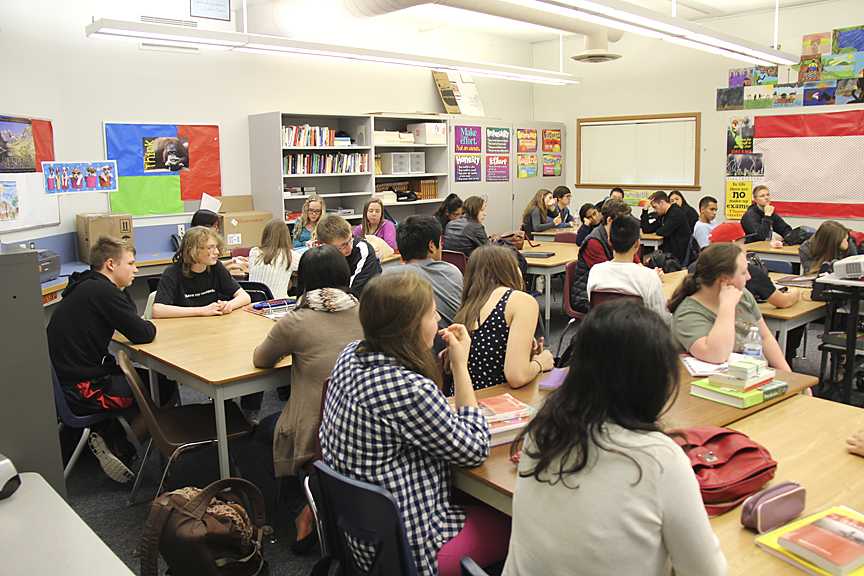 English teacher Gaynelle Derr’s fourth period AP English Language and Composition class started the year with 40 students. A new section was created, but there are 34 still students in the overcrowded classroom. Teachers, students and several legislators say there’s a great and immediate need for smaller class sizes in public schools.

Initiative 1351 (I-1351) is a measure to decrease classroom sizes in Washington by 2018 and is currently on the ballot for people to vote on Nov. 4.

Washington has the fourth largest class sizes in the country. According to the Washington Secretary of State (SoS) website, a high school general education class has an average of 28.74 students, with general high school education defined as social studies, math, English and science classes without a laboratory.

If passed, I-1351 would also require more non-certificated staff members.

I-1351 doesn’t include any tax increases, but it does come with a significant projected price tag. The Washington state Office of Financial Management (OFM) estimates the cost for implementation of I-1351 to add an additional $4.7 billion by 2019 to the state’s budget.

However, many proponents disagree, saying that the state needs to invest the additional funding to improve the quality of schools.

“What I think this initiative will do is send a message to the legislature. It will strongly say that our public, our people, our families believe in small class sizes for our children and our students,” McAuliffe said.

Many students and teachers said they agree with McAuliffe, calling for smaller class sizes in schools.

“I generally feel that smaller classrooms allow more kids to get more individualized help for those who need it,” Paine said.

Junior Mark Nguyen said the Initiative would be beneficial if passed because teachers would have an easier time communicating with the students. What he worries about is where the money and extra staff will come from.

“[Being in smaller classes is] a good thing for students, but if the estimated teachers needed is 15,000, where will they get all the teachers and will they be well qualified?” Nguyen asked.

Problems regarding class size are evident in classrooms here at MTHS. According to Principal Greg Schwab, this year the average class size at MTHS is 31 students, an increase from previous class averages of 28 to 29 students.

This year, more new students enrolled than those who left, reversing a trend that had continued since the mid-2000s. This resulted in more tightly packed classrooms.

Having so many students in one classroom can make it more difficult to get individualized attention from the teacher.

Junior Kathleen Cram, whose Advanced Placement (AP) English Language and Composition class started out the year with 40 students, said that having so many students in her class interfered with her learning.

“I thought the class was chaotic and noisy,” Cram said.

To accommodate the increase in classroom size, some new classes had to be added.

If additional funding is warranted, the school can then make more classes to supplement the overcrowding in certain classrooms.

The downfall to this method is that changing the students’ schedules after the school year has already begun disrupts their learning and impacts positive teacher-student relationships.

This fall, additional periods of AP English Language, AP European History, U.S. history and English 11 had to be created during the first two weeks of the school year because of overcrowding.

Junior Gene An was in a crowded AP English Language classroom until he was switched out and put into a new classroom with a different teacher. He said he would have preferred to have stayed in the overcrowded classroom rather than have his existing schedule changed.

Many teachers also found irritation in their classes being switched around.

History and drama teacher Jeannie Brzovic had to get rid of her technical theater class to make room for her overcrowded third and fourth period AP European history classes.

Students were being moved constantly in the beginning of the year, many calling it hectic and frustrating.

English and social studies teacher Steve Merlino had one of his English classes moved to a completely different teacher and had that period replaced with a new U.S. history class.

From students being switched around to various classrooms and teachers having to get rid of some classes to accommodate others, many staff and students were negatively impacted.

I-1351 raises questions about whether the decision in the case of McCleary v. Washington applies. In the McCleary decision, the court found that the legislature was not meeting its constitutional obligation to fully fund public education.

However, despite the ruling, the state has not even come close to the projected funding.

According to McAuliffe it would cost between $5 billion and $6 billion to fully fund basic education as defined, while legislators have invested less than $1 billion in education since 2012.

In September, the State Supreme Court motioned to hold the state in contempt of court for not complying with the court’s decision in a timely manner.

McAuliffe said that while the initiative, if passed, could be repealed after two years by the Republican controlled Senate, she believed that the Supreme Court could interpret funding I-1351 to be part of the state’s obligation to fully fund education.

Essentially, McAuliffe said she thinks that if voters were to say yes to I-1351, the legislature could be compelled politically and legally to finally amply fund public education.