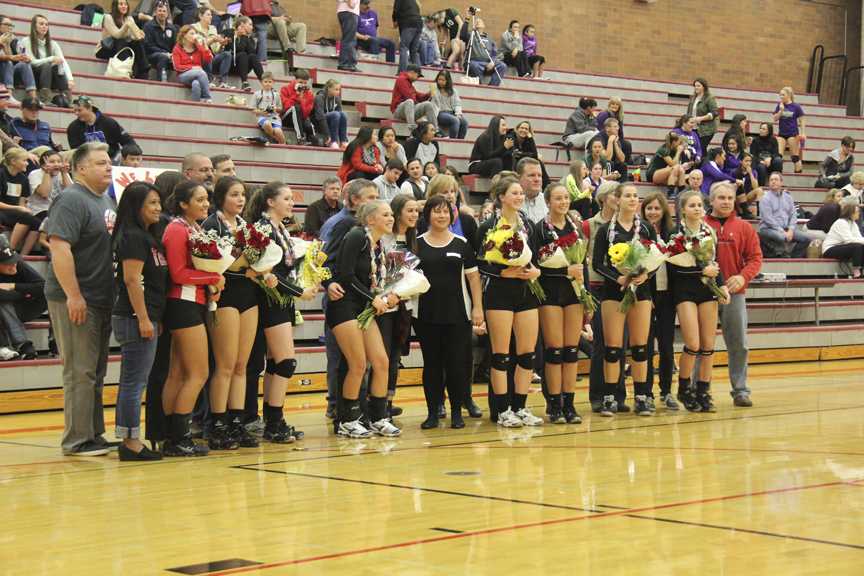 The seniors and their families all gather for a picture on a magical senior night.

The Terrace Hawks hosted the then second ranked team in WesCo 3A, the Edmonds Woodway Warriors on Wednesday night. Despite being the clear underdogs for this match, the Hawks came into this game with the clear mindset of dominating, and that’s exactly what they did. They won the match, 3-1.

This was the last game of the season so the Hawks wanted to dominate regardless of the opponent in front of their home crowd. They played with a chip on their shoulder and that was shown from the first serve of the game.

The first and second games were almost identical in how everything played out. The Hawks down early in both, but through a timeout, Coach Marietta Snyder was able to get through to the players. From there, they were able to hang with the Warriors until they put their composure on full display. They then edge them in two crucial close games. The Hawks won the first game, 26-24, and the second game, 25-21.

Going up 2-0 was huge for the Hawks, but this Warriors team was the second ranked team in WesCo 3A for a reason. In the third game, all momentum shifted to the Warriors side. They were led by their senior Maddie Judd who lifted them through the early goings of the game and carried them to a big 25-16 win over the Hawks.

In the fourth game, the Hawks cruised to a huge lead over the Warriors. The Hawks led 18-9, but this was also when the Hawks offense started to stagnate, and the Warriors started to creep back into this game.

“As they started to creep back into this game, there wasn’t much panic, but [the game] got a lot more exhilarating,” said junior Rowdy Rooter Gene An. “We weren’t too worried because we knew the girls could handle it and that they could get on a roll.”

And that they did. The Hawks went on to get out of their slump and win the fourth and final game 25-18. They won the match with a score of 3-1, and closed out the season with a huge upset against one of Terrace’s well-known rivals.

“We went out with a bang, and that was our goal,” said senior outside-hitter Alisha Clingan. “[The Warriors] were on our hit list, and boy did we crush them. I am so proud of ourselves.”
This night wasn’t just their last game of the season. This night was also senior night for a team that had eight seniors. Before the game even started, the Hawks were motivated and ready to fight their way for a win.

“I just wanted to kill it,” said senior libero Ali Hitchcock. “[This game] was the last game of my high school career. I was not going to let us lose, and I think that that’s how everyone felt.”
Hitchcock was right in that she wasn’t the only one who felt that way as senior outside-hitter Nicki Bouche also felt that way.

“Today was senior night, we have eight seniors, and it was our last game and we just wanted to bring it,” said Bouche. “This was the best we’ve ever played. Our intensity was just crazy.”

For Esther Babko, Andrea Cox, Gabby Joudi, Laura Clinch, Ali Hitchcock, and the three captains on the team, Alisha Clingan, Emily Eich, and Nicki Bouche, the eight seniors were able to have a special night playing and winning their last game of their high school career.

“It’s really sad thinking that after four years that this is my last game, but I think that this was the best way to end it and I’m super happy with my team and all the memories that we have,” said Bouche.
“[The game] was bittersweet, but I couldn’t have asked to play with any better teammates than I did this year,” said Clingan.

“I wouldn’t have want it to end in any other way,” said Hitchcock.