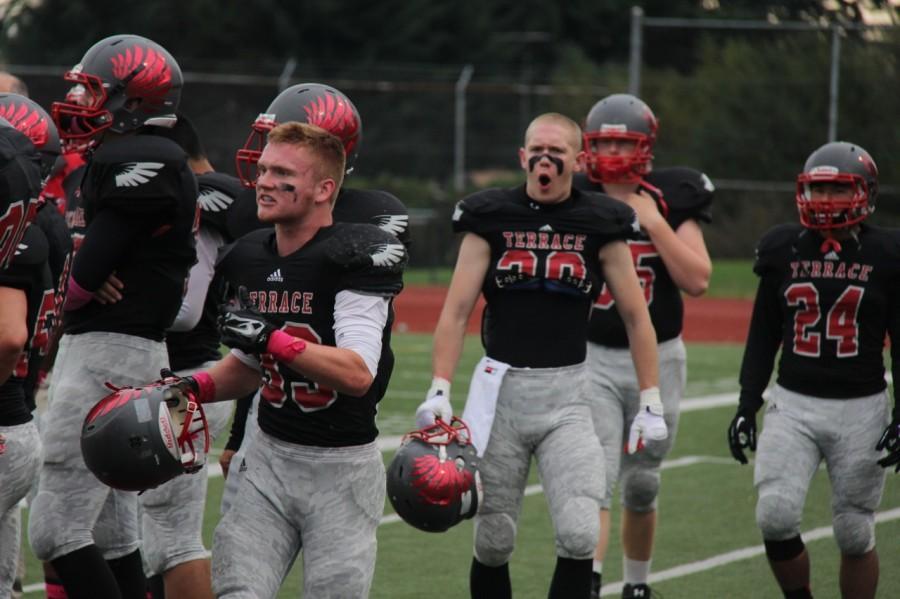 Under the Friday night lights, the Hawks and the Glacier Peak Grizzlies clashed at Edmonds Stadium for a thrilling game that just might go down in the history books. The Hawks erased a 22 point deficit at halftime and stormed back to win by just one point, 33-32.

In the first quarter, the Grizzlies simply outplayed the Hawks. They made few mistakes, scored easily, and capitalized on all the mistakes that the Hawks made. They started the game with a easy drive downfield giving them a lead of 8-0. Only about a minute after they scored, the Hawks mishandled a snap and the Grizzlies recovered it giving them great field positions. Once again, the Grizzlies played poised and through a balanced attack, they scored again increasing the Hawks’ deficit to 15.

For the rest of the first quarter and the most of the second quarter, the Hawks and Grizzlies were at a stalemate. The game progressed with multiple punts and turnovers on both sides until once again, the Grizzlies led by their senior quarterback, Brady Southard, was able to make all the right plays. The Grizzlies capitalized on that with a touchdown giving them a 22-0 lead going into the half.

Despite going down by a huge deficit going into the half and having all the odds go against them, the Hawks didn’t give up whatsoever.

Senior running back Ryan LaCasse said, “We knew we fought in the first half so if we just cut down on the mistakes, we knew we would have a shot.”

“Specifically halftime, I went in there and looked everyone of them in the eyes and told them that this is what we worked for…” senior fullback Malcolm Johnson said. “This is what we put our pads on every Friday night to do. Don’t quit, don’t put your head down. We either going to do something or we’re going to lay down, and what did you see out there? We did something.”

And indeed they did. Right out of the gate, the Hawks came out with lots of energy and through two consecutive plays of 30+ rushing yards through the tandem of LaCasse and Johnson, they were able to score within 48 seconds. They were still down 22-7.

It wasn’t only their offense that came out to play, however. Their defense stepped up big and they capitalized on the Grizzlies’ mistakes to get their energized offense back on the field just a minute after they had scored a touchdown.

In the next drive, the Hawks decided to dig deep within their bag of tricks and pull out a great trick play that involved a short pass to a wide-receiver who then would quickly lateral the ball over to Ryan LaCasse. Through this play alone, Ryan LaCasse rushed for 53 yards and brought it to the house for a touchdown, making the Hawks one step closer on the scoreboard, 14-22.

The Grizzlies weren’t done yet however. They regained their poise and decided to counter by giving the ball consistently to their own running back, Iain Black, and allowing him to make plays. That turned out to be the right decision as they were able to score on two consecutive drives creating an even bigger gap between the Hawks and the Grizzlies. The score at this point was 14-32.

Like before, the defense increased the intensity level, and the Grizzlies were simply flustered. While all that, the Hawks offense made huge plays through the individual efforts of senior tight end, Austin Bates, senior running back, Colin Rucker, and last but definitely not least, junior running back, Riley Morrin.

After the score was 32-27 and the Hawks got the ball back with a little under three minutes left in the game, the stage was set for Terrace to prove their worth in WesCo. It was at this moment that the Red Onion player of the game, Riley Morrin was crowned.

The Hawks held the Grizzlies to a three-and-out and forced them to punt. Morrin came up clutch and took things into his own hands.

“The referee was telling me to wave my hand and fair-catch the ball, and I told him that I actually wasn’t going to do that,” Morrin said. “I can’t do that. I have to return, and that’s exactly what I did.”

Morrin broke loose and ran a 94 yard punt return giving the Hawks the lead for the first time in the game 33-32 and erasing a deficit that was as great as 22 points.

“That was an okay play turned into a great play,” Johnson said, “[Morrin] is one of the hardest working people at practice. That’s how I knew he was going to return it.”

The rest of the game was all a result from the Hawks defense as they were able to stop the Grizzlies twice through interceptions by LaCasse, and senior linebacker Gabe Brady. They went on to win by just one point, 33-32.

LaCasse said, “[Coach Russ] Vincent at halftime said that it could’ve been the greatest comeback in history, and we just believed it and went with it.”

With this comeback victory, the Hawks clinched a playoff berth, have won four straight games making them 4-1 in conference, 5-1 overall.

They’re not done yet however.

“This was a great win, no doubt, but we still got a lot of things we need to touch up on,” Johnson said, “We can’t give up 32 points in the playoffs. We can’t go into the first half and not score anything. We can’t keep putting our defense on the field and expecting them to get a stop. That’s why we are going to get another hard week of practice and get better.”

For Homecoming, the Hawks will host the Lynnwood Royals Friday at Edmonds Stadium at 5 p.m. The Hawks will try to improve to 5-1 in conference, 6-1 overall, and win their fifth straight game.